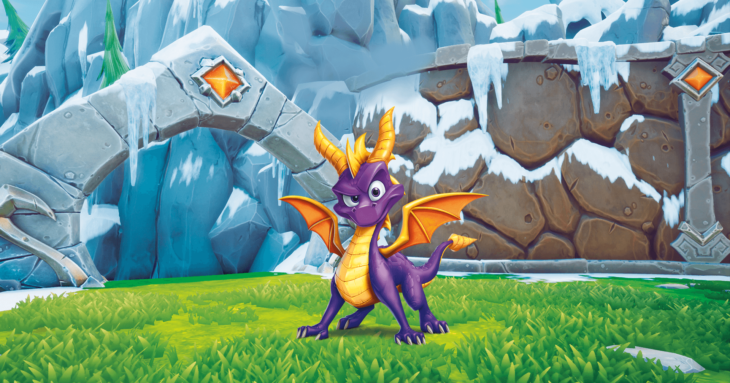 The announcement of Spyro Reignited Trilogy relieved many who had been faithfully crossing their fingers ever since his Sony counterpart, Crash Bandicoot, made an epic nostalgic comeback last year. While many of us are eagerly awaiting the return of the original Spyro trilogy remade for modern consoles this September, there are a few big changes that will help our favorite purple dragon adjust to the 20 years of technological advancement we’ve seen since his debut.

Throughout the original Spyro trilogy players would explore a creatively whimsical world brimming with colorful characters and imaginative levels. While the original worlds had a captivating appeal to them some 20 years ago, in today’s standards we’ve become so adapted to venturing through seamlessly life-like settings from start to finish. Luckily for us, Toys for Bob is reimagining these surreal worlds with a beautiful modern appeal to help Spyro blend in with the current world of gaming.

Grass fields and foliage will blow gracefully in the wind, finer details to buildings and other objects will shine in the ultra enhanced lighting effects, and Spyro’s flame will energetically roast anyone (or thing) in its path. The game is built in layers upon the original layout with each layer faithfully keeping in the nostalgia factor, but revamping the entire aesthetic of the experience. The brighter color contrast and advanced shading found in today’s modern consoles completely takes the place of the limited technology that unintentionally held the original trilogy back on the original Playstation.

While the AI within the vibrant world of Spyro Reignited Trilogy will largely follow the exact same paths and actions we experienced in the original trilogy, the animations and behaviors have been greatly enhanced. Players returning from the originals may notice the similarities and familiar patterns from enemy to enemy, only now they’ll react in a much more impressively life-like feel.

AI opponents will patrol each stage same as before, but now help create something that blends much more appropriately with AI found in today’s modern games. The world is now much more lively and is dripping with lively character around every corner; something that was largely constrained in the original releases largely due to the limiting hardware of the original Playstation console. Now, with cutting-edge technology, Spyro will roast his way through interesting and incredibly appealing characters that truly bring the open world of Spyro to life.

And not only do the enemies has unique character traits, but NPCs such as Elder Dragons all have their own distinguishable personalities to help liven up the experience. Characters littered all over the world all help create more dynamic occurrences from one interaction to the next, something that now seems so lacking in the original trilogy.

It goes without saying that controls found within games released in the pre-millenium era where often sluggish, or otherwise clunky. The dual analog stick wasn’t a common feature for popular consoles, so many small features like a free-rotating camera we now take for granted. While the original Spyro games did feature the ability to freely rotate the camera around the purple fire-breathing dragon, players accomplished this by use of the bumpers or shoulder buttons. However, in today’s modern gaming world we’ve grown much more adapt to using the right analog stick which has also found its way into the Reignited Trilogy.

Other features which help ease the tension of finishing levels from start to finish is the quality of life improvements, which were also made apparent in remade release of the Crash N. Sane Trilogy. Useful elements like autosave and checkpoints are now available in the world of Spyro making more a much more approachable experience for players of any age or skill level.

Spyro Reignited Trilogy is set to release on the purple dragon’s 20 year anniversary which is September 21st, 2018. So far, it’s only been announced for the PS4 and Xbox One, but considering how well the Crash N. Sane Trilogy has been received by other platforms like PC and the Switch, we shouldn’t rule out the possibility for Spyro to expand beyond those two major consoles.