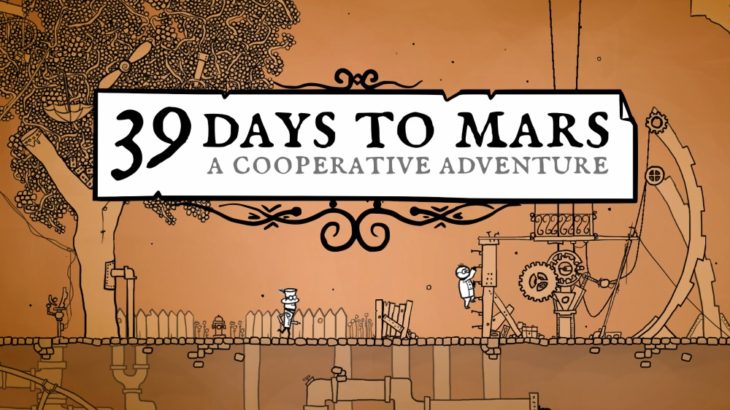 An Extravagant Adventure Through Space

39 Days to Mars pits two friendly 19th century inventors against a trivial adventure to the Red Planet in an unbelievably designed space craft often thwarted by break-downs and other obstructions. The game created by It’s Anecdotal takes players through a journey aptly taking approximately 39 days to the surface of Mars, with a plethora of mind-bending puzzles and challenges. There’s a refreshing dialogue that guides players through the journey all supported by unique co-op puzzle solving; but players looking to go this adventure solo best be prepared for a more frustrating experience.

Check out our video summary review of 39 Days to Mars below:

Players are greeted to a casually challenging adventure that takes only a few hours of game time to complete. However, what’s missing in lengthy game design makes up for with nifty puzzles to keep the inventive team on their extravagant quest to Mars. The game greets players with the two jolly inventors – Sir Albert Wickes and Clarence Baxter – as they set up to embark on their journey in their makeshift space craft, the HMS Fearful. Little do they know, the improvised galactic vessel will keep the two partners busy along the entire journey.

Care For A Spot Of Tea And A Scone?

After the opening tutorial-esque level which has players partaking in a few puzzles and unlocking their way into the spacecraft, the duo begins their journey into the stars. The opening puzzles does a good job of acquainting player with the controls and a little bit of what to expect in terms of gameplay. Players will feebly explore a 2D hand-drawn world in search for interactive moments within the game. Most interactions require both players (or yourself and your faithful cat if going the adventure alone) and begins a new challenge that stands in the way of further space exploration. The puzzles themselves sometimes pin players with a specific time limit, but failure never results in-game over – just merely giving the puzzle another go.

When facing a certain puzzle, each player will use one hand to grab and rotate various objects, such as puzzle pieces, cables and wires to connect in a specific order, and working together to pour hot tea or assemble a delicious scone. While most puzzles pertain to various aspects of space travel or spaceship maintenance, proper food and drink preparation in between each main objective will consistently task players with what becomes meaningless repetition. Being proper gentlemen of the 19th century, before each puzzle or challenge objective, players will be instructed to prepare either tea or a scone with all of the dressings read off of a recipe sheet. The difficulty in these challenges is navigating particular scone toppings and tea ingredients in tandem in order to craft the perfect blend to make your inventors satisfied enough to tackle the possible life-ending problem occurring with the tandem’s ship – HMS Fearful.

Like clockwork, the characters will nag at the players that they can’t fix the current issue with the ship until they had their afternoon tea or scone. Picking up a tea kettle and carefully pouring some hot water in a cup with one hand being guided by one player and the second-hand guided by the other takes a tremendous amount of teamwork and often verbal confirmation on the situation. While these interruptive afternoon snacks may become a bit annoying later in the journey, they do help create a better team effort for some of the more trivial puzzles in the game.

A Journey Where Everything Goes Wrong

But enough about tea and scones. The real meat in the game is the various problems that arise due to the faulty nature of the HMS Fearful. Every few days that pass in the game while the players gleefully soar into space, a new piece of the ship either breaks down or requires assistance from the two inventors. Players will be tasked with writing Morse code back to Earth but only after learning specific lines from the ship’s library, collecting pieces of coal scattered throughout space or fending off “space fish” attacks that begin inking up the entire spacecraft. However, while these are a few examples of active challenges in the game, there’s also plenty of puzzles to solve as well.

Maintaining the ship’s garden, piecing together your map of projected travel and connecting correct corresponding cables together are a few of the more tedious projects within 39 Days to Mars. The game circles around co-op gameplay and the puzzles mostly require both players to play particular roles in completing each task. Reworking puzzle pieces to come to a solution and working together mostly creates a rewarding experience for both parties involved, however, some of the puzzles can be done with only one player involved – which can lead to more experienced players addressing their partner to “hold off” while they solve the solution. Again, the game mostly presents co-op only solutions to the various puzzles within the adventure, but playing the game in solo mode can highlight some of the areas where puzzles may be completed individually.

There’s never any overly exhausting puzzles or obstacles that stand in your way to Mars. Some puzzles may come off a bit unnerving at first, but after some time with what each task presents it becomes fairly easy to point out each objective. And as mentioned above, without the added pressure of failure looming over your shoulder with every challenge, picking up the game’s many complex endeavors rarely pins any unwarranted frustration on the game. Working together feels like a true team effort when journeying to space and fixing the many problems on the HMS Fearful.

Best To Stick To Co-op

Where the problems tend to make themselves apparent is the tremendously awkward control scheme for the single player adventure mode. One of the characters decides to journey to Mars on their own, bringing with them their faithful cat partner. The feline partner acts as the secondary hand when taking on various tasks, allowing the single player access to both hands when solving puzzles.

The player controls both hands with each analog stick. You’ll then grasp with each hand using the corresponding shoulder button for either the left or right hand. This tedious mechanic is extremely off-putting at first, requiring the player to accustom their efforts by mirroring each hands movements. It almost begs the player to be ambidextrous relying heavily on dual movements in order to successfully navigate each puzzle with two hands appropriately. Eventually, however, solo players may find that sweet spot for making their way through the game without a true partner. Paying close attention to each hand can be rather tricky, but makes sense in the grand scheme of things.

There’s really no other convenient method of tackling this game in single player from a developer’s perspective, so wrapping your head around the confusing control scheme is really the biggest hurdle in the game. Once accomplished, however, pouring cups of tea, crafting the perfect scone and solving the many issues that arise within the journey to Mars becomes less of a hindrance, and more of an accomplishment.

The game which is centered around unique co-op heavy puzzles and a curious tandem of tea drinking, scone eating inventors destined for the mysterious Red Planet presents a unique, amusing experience. While the pace of the game keeps you on track of completing a variety of puzzles and challenges, the constant interruptions of scone and tea preparations often feels a bit forced and inconvenient. Though, the heart of 39 Days to Mars still offers fun puzzle solving that never seems tire and creates a short, yet thoroughly engaging space journey.

For players looking to challenge themselves with a friend, 39 Days to Mars is a short but mentally demanding adventure. The two inventors work well together when fixing the numerous issues that arise in their makeshift space craft, allowing for a satisfying experience. However, if looking to dip into the adventure as a single player, some frustration may arise due to a confusing control scheme requiring a more dexterous approach. All the while, the tagline of “Co-op Adventure” should not be ignored as the game truly shines when enjoying this cosmos journey with a friend. With a puzzle system requiring quick wit and understanding of basic mechanics, 39 Days to Mars is an easy to understand title with a rather complex, yet satisfying method of problem solving.