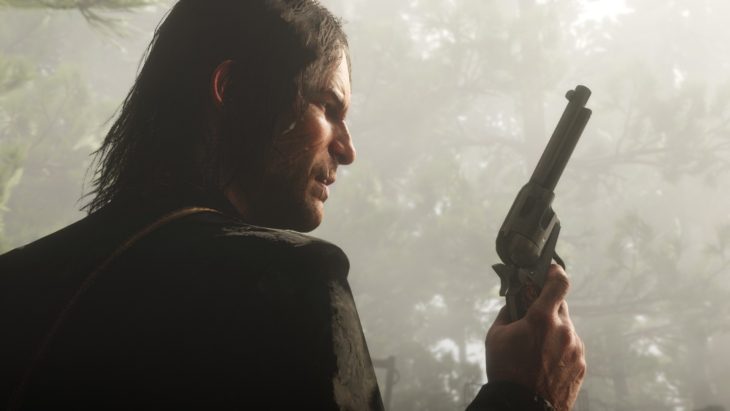 Recently, Rockstar North released their latest cinematic trailer revolving around their next upcoming, highly anticipated sequel – Red Dead Redemption 2. Focusing around the Van Der Linde Gang in the late 1800s, Rockstar North is now beginning to shine a bit more light on what is going to make RDR 2 stand out from plethora of open world sandbox titles released year in and year out within the industry.

We’ve seen more and more developers try implementing an actual occupied world where residence live out their normal day-to-day lives in open world video games before. While it’s much easier said than done, most of which are able to achieve this sense of realism that only lasts until you begin noticing the never-ending cycles of random cleaning, vigorous labor or 24/7 shopkeepers. At first, these events paint a lively world that seems to move at a steady pace without your personal involvement. Soon, however, the repetitive and robot-like actions begin breaking immersion further distancing the player from the fantasy experience.

Rockstar is looking to enhance this realistic nature by giving each individual, not only routine schedules, but also unique personality traits and quirks. Not every NPC is armed to the teeth with expert rifleman skills and unlimited ammo, either. Different characters drop in different reactions, while the player themselves may experience various engagements depending on the situation and civilian approached. Whether you’re interrogating, robbing someone blind or perhaps just dropping a friendly “Hello”, players will have the freedom to interact with the busy residence around within a world that will live on, with or without the player’s entanglement.

Throughout the marketing for Red Dead Redemption 2 players have continuously been shown a group of seven silhouetted characters resembling that of an old western gang. The Van Der Linde gang is the central focus on the RDR 2 story, having players take control of one of the more responsible gang members, Arthur Morgan. The gang’s campsite serves as the overall hub of the Van Der Linde members, but also displays an inside look at the everyday lives within the community.

Players will have the freedom to come and go within the campsite as they please, but may also complete some busy work to keep things operating smoothly within the organization. While the gang campsite runs efficiently without your help, further relieving any would-be worried players concerned about seemingly endless management chores, players may also be additionally rewarded for taking part in optional tasks of helping out around the gang site.

The world of Red Dead Redemption 2 and its many inhabitants all react accordingly to different situations. Of course, knowing how each individual will react isn’t something that’s made abundantly clear from character to character. Something as relevant as approaching a civilian with your gun holstered or not may change the situation entirely. Some residence may cower in fear, while others flex their egos and begin to raise suspicions based on your actions. Every reaction seems to base itself off of the actions of the player, no matter how small those actions may be.

As mentioned above, the gang campsite houses the many members within the Van Der Linde community. While taking in responsibility to help out around the site is entirely up to the player, keeping the members satisfied does in fact help boost overall morale. Tensions within the gang can escalate and continue to either improve or spiral downward depending on resources, gang interactions and helping operate a tidy operation.

A Manageable Dose of Realism

Many aspects within modern games today have a natural focus on keeping the game as realistic as possible without hindering fun and exciting gameplay. Often developers must perform a balancing act in order to blend a perfect dose of realism to the experience without turning games into one massive chore. RDR 2 is looking to add to this formula with a realistic approach to specific nuances in the game, but ultimately wants to keep things fresh and entertaining throughout the game.

The weaponry, most notably the many firearms, that will feature in RDR 2 is one example of Rockstar attempting a bearable, realistic experience – but without the cost of joy and excitement. Whether it’s the timing of the reload speed, or the reload action itself – each firearm has its very own specific detail in how Morgan handles the situation.

In an article from IGN, Rob Nelson from Rockstar North, elaborates on how wildlife interacts with the constantly moving timeline within Red Dead 2’s world. Hunting and skinning wildlife is nothing new to the open world genre of video games, but RDR 2 is adding an increased amount of realism to the mix. Players may now be a bit more hard pressed for time when turning in larger wildlife kills for valuable supplies, as decomposing carcasses could throw a unique twist in the direction of the player if they’re not quick with their hunting skills. While this sounds like a tedious issue for many, Rockstar states that not all animals suffer from the decomposing effect, as the smaller kills are preserved in Arthur Morgan’s satchel.

Read Dead Redemption 2 is promised to be filled with important and table-turning choices all made at the player’s hand. Aside from cutting the leash within the world and allowing players to venture off into their own path, players will be lined with important choices during the many missions within Red Dead 2. Performing stealth bank robberies versus gun-toting fire-fights naturally have different outcomes.

Also, interacting with your gang may come and go with each player, but the game manages to create a compelling story no matter the choice you make. Checking up and keeping things in top condition may sound like an obvious choice for those gamers looking to keep morale high within the Van Der Linder gang, but what about the players uninterested in the gang campsite? While either action is not only achievable, but also molds extremely well within the game itself, players will undoubtedly notice the difference in tones and interactions from character to character based on Arthur’s actions. The living world around Arthur Morgan will shift around you according to the many choices made throughout the game.

Red Dead Redemption 2 is officially set to launch every on October 26th, 2018 for the Xbox One, PS4 and PC. Keep an eye out for more information coming from Rockstar as we inch closer to the highly anticipated title due out this Fall.