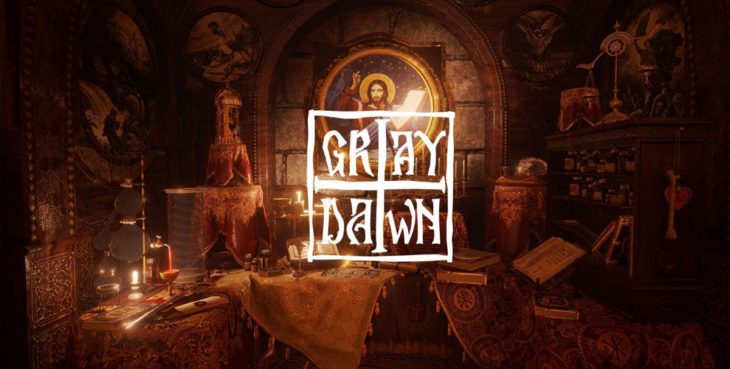 The obscure and disturbing instances experienced across the hour or so long preview demo of the upcoming religious psychological thriller – Gray Dawn – manifests the abnormal blend of distraught settings with unintentional mood shifting dialogue. While the solitary tone and religious 1920 setting help bring the player into a realm of other worldly evils, the unique puzzle solving and constant push towards exploration will soon have players fighting the grips of what’s real, and what’s not.

Diving into the role of Father Abraham, you’ll begin your adventure to find the missing altar boy whose disappearance has been solely laid upon the confused priest. Determined to prove your innocence, Abraham must travel between shifting realities and re-live dreadful nightmares from his past to relinquish the guilt haunting his thoughts. Gray Dawn is shaping up to be an alluring dark and twisted religious themed horror that picks up on subtle puzzle solving and equipped with an enriching narrative.

As you explore through the dark atmosphere that so furiously haunts Abraham in an immersive first person view, soon enough players will begin collecting hints and specific key items to solve systematic puzzles later down the line. The game feeds off of exploration and turning over every rock for a heightened sense of knowing everything around you. With no real challenging obstacles throughout the demo progressing the story and venturing further into the surrealism of the world rightly depends on paying close attention to detail; and following the constant thoughts of our trifling protagonist.

The mood of the game nails the eerie undercurrent of panicking emotions and confusion delivered by Abraham. However, throughout the short preview trial the mood would often break from the tense atmosphere by the outspoken and unrelenting dialogue that unintentionally tears through the immersion. Spooky and unexplainable occurrences will take place throughout the unearthly adventure, hopefully warming up to Abraham’s flow of self-pertaining queries and evocative thoughts open more doors than not.

Gray Dawn does a great job of graciously  leading players around every bend conforming to the next objective. That oh-so charming accent that consistently peaks its noisy head in does in fact come with a bit of use. Often after pushing the journey further Abraham – as well as other grim voices – will remind himself (the player) of what the next course of action will include. While the preview was mostly straightforward and linear, there does seem to be a few open areas to explore allowing the player to break from the continuous pathway forward.

Related: Preview of the delightfully poetic and charming point and click title – She and the Light Bearer

The unraveling story of Father Abraham sets a disturbing presence amidst a dreary Christmas Eve night in the year of 1920. The sorrowful events leading up to Abraham fighting to prove his innocence are as troublesome as the ever-shifting settings that navigate the Father into a night of terror. Interacting with the many objects and clues leading up to your inevitable discovery has been comfortably accessible to intriguingly push the player to explore around every nook and cranny the game has to offer.

Gray Dawn doesn’t seem like it will break through any barriers within the haunting realm of surreal environments and thrills, but it definitely looks to take the genre down a different path in regards to story. While the semi-banal puzzle solving and tedious scavenging has had its day within fright-filled adventure genre, Gray Dawn still has plenty of game to share once it officially release on June 7th, 2018 on the PC.

Stay tuned with Raging Gazebo for our official review covering Gray Dawn once it lands.