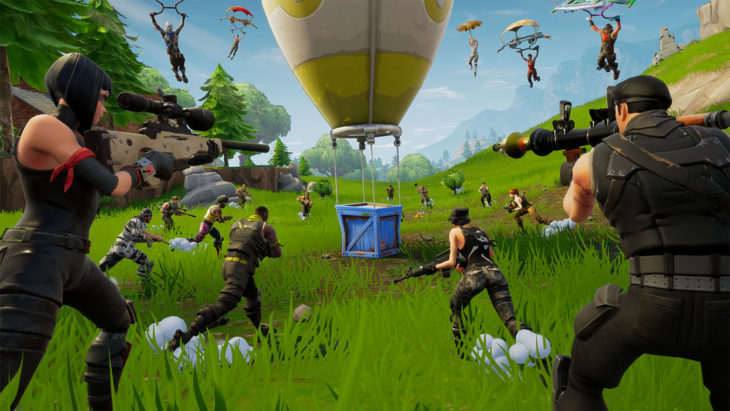 The battle royale genre has been heating up to monumental numbers for well over a year now, and the industry is starting to see more and more franchises lean into the popular online genre. The act of going up against 99 other players in an all-out every-man-for-themselves scenario is a daunting objective, so here are a few tips that could help the beginner BR player steer towards a more experienced play style.

While the battle royale mode can often lead to heated, intense moments between survival and death, a large portion of matches contain slow looting and managing your inventory with only the best equipment. It’s the build up to these red-hot moments of rapid gunfire that make the anticipation of stocking your character just right that makes the BR experience so rewarding.

So, within the 90 percent of the match time that you’ll spend covering the map in search of powerful equipment, enemy kills and making your way to the ring of safety, remember that there’s 90 or so other players looking to do the same thing. Rushing to find and claim as many kills as possible will most likely net you a quick death, so don’t be afraid to stock up, cautiously hunt for opponent kills, and even wait out potentially hazardous gun fights – if your able to stay well-hidden, that is.

Keep Your Eyes Open For Loot

Most BR games we see involve heavy survival mechanics, such as starting off with nothing and scavenging your way to a full inventory of proper items, resources and equipment. First thing’s first – you need a weapon to defend yourself from inevitable enemy gunfire. Once you feel secure with a comfortable firearm, keeping your eyes peeled for healing items, protective gear, ammo packs and, of course, extra gun power are crucial for keeping the fight coming.

Maps typically allow players to explore every building, every nook and cranny for valuable equipment. Some also periodically spawn random loot drops within the game, which not only allows for opportune looting experiences, but also act as a magnet for players to converge to. Whatever your method of scavenging, looting is a big part of the game mode – and one that should sit at the top of every player’s (newcomer or not) to-do list.

Related: Some Of The Most Valuable Items To Sell Early On In Moonlighter, And Where To Find Them

If you’re new to the entire BR scene, taking on 99 other players on your own may not be the most effective method of earning that coveted chicken dinner. Being taken under the wing in either duals or 4-man teams will not only give you better odds of winning a match, but will allow you to learn from possible experienced BR players.

Discovering hidden loot areas, witnessing strategic tactics from a different perspective, or even just getting a bit of confidence under your belt can go a long way in tackling the difficult road of battle royale. And if you’re not particularly keen to the idea of going solo, then more power to you for teaming up with other players and getting a better grip on the demanding BR experience.

This may seem pretty obvious, but BR requires a type of concentration that a lot of others don’t Because of the massive layout of the map, it can be rather difficult to spot distant players aim their sniper rifle between your eyes. One missed look or subtle scan of the field around you can easily put you in a tough situation, so staying focused and expecting someone around every corner is really your best defense.

Many new players may also find themselves on the wrong side of the action by attempting to manage their inventory when either standing out in the open or when an opponent is near. These are major areas of gameplay where players must stay focused and ensure they’re tucked away in a safe environment before opening their inventory screen. That, and keeping your eyes peeled for distant snipers, ears open for nearby footsteps and fingertips at the ready for those quick 1-2 shots are good methods when diving into the BR experience.

While these tips might not net you victory after victory every time out in the field, they will help new players adjust to the often insurmountable odds newcomers face when jumping into their first matches of battle royale.