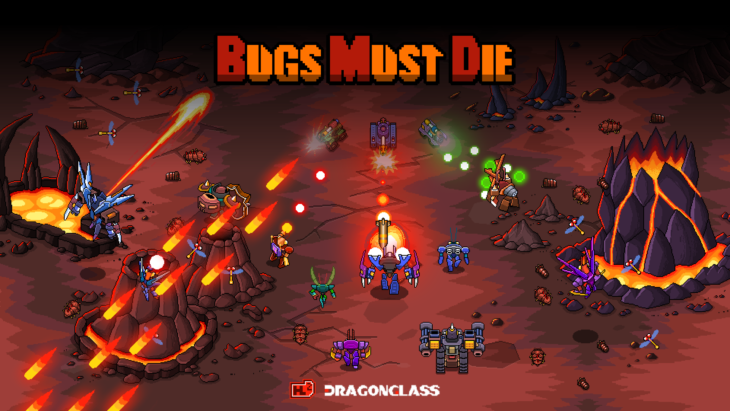 There’s a special feeling that typically associates itself with the twin-stick shooter genre in video games. With relentless action, mountains of bullets to sift through while unloading your own mini arsenal’s barrage of firepower in every direction not only takes immense concentration – but regularly requires tight maneuvering and patience. Bugs Must Die attempts to capture these very essences that have helped create some of the best twin-stick arcade titles around; but does it accurately portray itself as a stand out title in such a genre? Or does it find itself blending into the background as yet another dive into the often saturated category?

Check out our video summary review of Bugs Must Die below:

Players are introduced into a lively arcade game that has them controlling an armored weapons vehicle exploring alien inhabited planets and wiping out enemy alien bugs planning to invade Earth. The vintage arcade twin-stick style plays great and offers up plenty of challenges to keep you grinding throughout the game. With over a dozen levels each with their own boss battle and waves of enemy reinforcements, it’s easy to lose yourself in the inter-galactic action found within Bugs Must Die.

After the opening tutorial levels, players are unleashed into the world with alien bug threats coming into the screen from every direction. The game offers a few different vehicles to control that come with their own stats, such as speed, attack damage and defensive damage. The faster vehicle offers greater agility and the ability to dodge incoming bullet fire with quicker reflexes, but takes less damage before death. A beefier vehicle comes with more defensive points to help players stay alive longer, but often moves at a much slower pace. Between the selection of vehicles, it’s safe to say there’s a decent amount of variety to help cater to each individual player.

The retro vibe between not only the gameplay design, but the entire aesthetic of the game is a welcome sight. The classic arcade gameplay yearns for the old-school arcade days and relentless action of coin operated machines. But the game allows for simple progression as well, leaving good opportunities for the player to dive back in for more without the hassle of dropping in another quarter.

Each vehicle comes with a selection of unlockable weapons that can create different approaches to enemy take downs. While the traditional twin-stick approach of relentless bullet fire from automatic turrets is a satisfying strategy, lobbing grenades or firing off homing missiles can deal more damage in greater bursts. It’s with these different primary and sub weapons that allows players to take on different scenarios with new tactics and strategies.

And to continue the progression in the game, players will also unlock new armored vehicles, new weapons and upgrades for their arsenal. Slaying alien bugs nets the player various types of coins which may then be traded in for enhanced weaponry and upgrades. While the primary weapon players start off with which utilizes infinite ammo doesn’t offer any upgrades, the many other weapons which may be used as the secondary main weapon see increases in ammo count and attack damage. And other upgrade types include players equipping aerial drones that automatically fire when near enemies, providing a small amount of assistance through the galactic mayhem.

However, it won’t always be up to the primary weapon fire to take out the massive swarming hordes of bugs. The sub weapons allow players to deal a wider area of damage to foes, such as grenades or the napalm spreading full-screen attack – calling in air support from a fighter jet. With all of the weapon selections in play, there’s a decent amount of strategy to remember when in the fray of the alien invasion. However, it’s the many different weapons and careful weapon swapping that can halt the experience by offering too much for the player to worry about. Instead of placing the player into an area and having them dodge bullets and fire back relentlessly, it becomes a challenge against the player to remember the entire arsenal at their disposal. In what should be an exciting experience can turn into a sheer fit of frustration due to the game taking away from player concentration with so modes of attack to utilize.

What can also come off a bit more frustrating is the constant off-screen bullet fire. While it’s not necessarily something that’s stayed out of the twin-stick shooter space over the years, the amount of off-screen bullets incoming can leave players taking unwarranted damage that may seem a bit unfair since players can’t see where the incoming fire is coming from. Players can adapt to the issue once adjusted to the game, but the issue seems to be caused by the game’s open environment instead of a more standard approach to keeping players confined to one stable screen filled with incoming waves, rather than players moving forward too quickly only to find streams of bullets firing off-screen.

Another small issue that can be made present is more a sign of the age of the genre. Bullet patterns can become incredibly predictable allowing players to simply stand in one position firing away while they “automatically” dodge enemy gun fire. It’s not necessarily a cheap factor towards the AI, but can take away from the overall experience if figured out in certain situations.

Struggles Against the Alien Bugs

However, amidst a few of the less stellar issues, there’s still a certain amount of joy and excitement to be had. Players will die often within their time defeating the hordes of alien bugs, but with every death comes new opportunities to upgrade your vehicles and weapons. Each vehicle comes with a set number of hits they can accumulate before the Armored Vehicle is destroyed that works basically like a health bar. While the quicker vehicle starts off the game with only being able to take three hits before total destruction, the heavier vehicles can range around 4 or 5 hits. It’s a small difference but can mean life or death when taking the final boss down to its last segment of health.

However, just because your vehicles take the final blow doesn’t mean the fight is over. Once your armored vehicle gets destroyed player will have one more life in the way of a small, considerably weaker drone vehicle in order to try to finish off the current mission. If the player has an extra life handy, staying alive as the drone within the designated time limit can allow players to re-spawn their armored vehicle with all lives in tact. This makes the game sort of feel like it has a “bonus” life and paints a slim, yet helpful sign of hope before failing the mission.

While the immediate difficulty in the game is outright challenging, there’s plenty of opportunity provided by the game for useful upgrades. Death won’t reset any upgrades or purchases made within the campaign, so as long as you’re collecting coins, you’re progressing – even if it might be a bit more of a grind. The game’s conclusion never feels incredibly out of reach but could likely take a bit of grinding for the average gamer. All in all, enduring the minor frustrations set in place due to the nature of the twin-stick shooter genre, there’s definitely some good times to be had within the struggle against the alien bugs.

Bugs Must Die won’t offer a great deal of change to the tried and true formula of twin-stick shooter mayhem. There are waves of enemies and tons of bullets, but that’s the primary gist of the game. Various upgrades, weapons and vehicle unlocks, along with other minute features poking their way in, it feels more like a game that should be experienced by someone merely looking for yet another arcade shooter rather than a true game changer.

For those craving every new twin-stick style arcade shooter, Bugs Must Die isn’t a terrible chapter. While there’s certainly better renditions of the genre found in droves within the market, there’s also certainly worse. Boring or obvious bullet patterns from enemies leaves much to be desired while constant off-screen enemy attacks gets old. There’s a good foundation within Bugs Must Die for something truly worthwhile, at least, in the indie space – but unfortunately the game in its current state isn’t worthy enough to go up against the few arcade shooters around that manage to hold their own in the immensely cluttered genre.

Review copy for the game provided by the publisher.