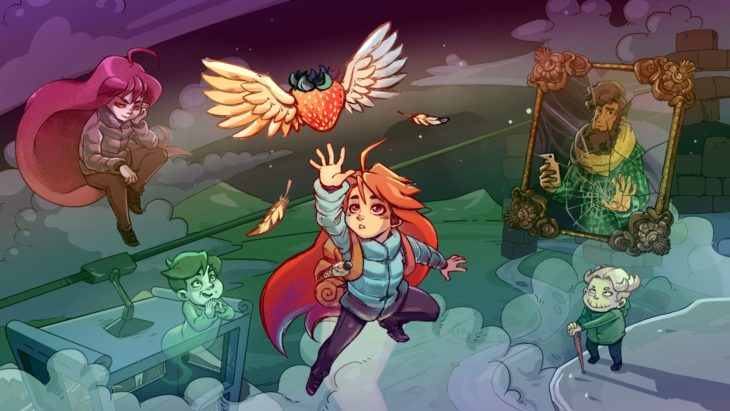 An Admirable Adventure To The Summit

Celeste invites players into a challenging platforming adventure to the top of a magical and mysterious mountain. As Madeline, players embark on a dark journey as she combats the treacherous terrain, as well as her own self as a dejected and insecure soul. Created by indie developers Matt Makes Games, Celeste interprets the obstacles of the challenging gameplay in a perfect manner that directly corresponds with the thoughts that rifle through one’s depression tainted mind; and leaves an ever-lasting feeling upon its triumphant finish.

Check out our video review of Celeste below:

Upon your arrival to Celeste Mountain players will immediately notice the retro inspiration at the core of the game. Madeline moves fluidly with simple button controls to jump in eight directional movements. But, like most tight and challenging platformers, in Celeste players will also have a type of double jump feature which gives players an extra boost in mid-air. While simple to understand and use, it’s navigating around the many obstacles and dangers within the game that truly test your patience and dexterity in order to overcome the mountain.

Madeline is the type of mental warrior to push herself through incredibly daunting tasks, and the game does an outstanding job of pushing that onto the player. Running along the platforms and jumping through each section allows players to adjust to the often frenetic and fast-paced play style. Utilizing the unique climbing mechanic also gives players another weapon when faced with difficult circumstances. Only on rare occasions is the player pushed through specific sections in the game with time being a factor, usually when Madeline is faced with the mirrored version of herself which portrays the darker side of her persona.

Different from many other platformers in the genre, Celeste offers up smaller sections to navigate through allowing players quick turnaround after succumbing to the dangers of Celeste Mountain. Failure happens quite often within Celeste, but it never feels overwhelming due to the instant retry factor that occurs after every death. There’s no loading screen, no overdue long animation, but instead a fluid stream of attempts until you inevitably pass through the section unhindered. It’s a type of failure that’s easy to live with as there’s not much time to dwell on your mistakes, but rather allows players to consistently learn from them.

As you progress through the game, players will discover new mechanics to adhere to that amp up the gameplay considerably. Using a variety of gameplay elements tied to each level brings new twists and surprises to the entire 5 hour or so experience, and never once do these new features feel out-of-place. The game demands constant concentration and proper directional control from the player, which creates a challenging adventure that properly corresponds to the narrative of Madeline and her journey to the summit.

Along the way Madeline will also meet a couple of faces to help (or disturb) her on the journey to the top. These characters portray the difficulties and often nagging characteristics that deflect Madeline’s true feeling towards her battle against depression, but manage to take on a deeper role the further you dive into Celeste. There’s some personal and intense dialogue moments that take place periodically throughout the platforming action found in Celeste, and it helps create a lasting impression on not only the story of Madeline, but the determination needed to overcome the mountain’s many obstacles.

Where Celeste begins to show its more difficult moments is in the double jumping limitations. While the air jumping mechanic provides a mid-air boost to help reach life saving platforms, players may only use it once before landing on both feet. Clinging to walls and climbing to safety is a useful feature, but Madeline is only able to do so for a short limited time before her stamina completely runs out. Managing both her climbing stamina and single use of the air jump dash move creates a sense of strategy in the game where most platforms fall short. The simple controls beg for continuous attempts while the few navigation mechanics offer up different methods of tactics for completing each and every segment.

The flow of Celeste provides players with a platforming experience that resonates with those reminiscent of the nostalgic 16 bit days of the 90s. Simple and fluid controls makes each attempt a learning experience rather than creating frustrating moments due to a complex gameplay design. Running, jumping and planning your technique is a rewarding experience, especially after configuring a smooth and fast-paced play style. Bouncing off walls and jumping through dangerous caverns successfully provides a type of satisfaction not typically found within the genre, allowing players the mental satisfaction to continue pushing forward.

And to keep the gameplay picking up when exploring new areas of Celeste Mountain, the game places bonus air jump items, resilient enemies and other objects to really push player dexterity. The single air jump will only get you so far in the game, so utilizing the many scattered bonus jumps littered throughout the game offers a much more advanced method of making your way through each segment. and bouncing off enemies chasing Madeline keeps the excitement coming all the way until the end. However, the game isn’t necessarily relentlessly throwing dangerous foes your direction, as the pace of challenging platforming areas mixed with out-running enemies blends together near-perfectly.

Adding to the standard campaign areas that point you in the direction of the end of each level, there’s also tons of bonus areas to truly test your platforming skills. Collecting strawberries littered throughout the game may not provide any exceptional bonus other than bragging rights to friends, it does extend the gameplay length considerably as each bonus area offers tougher situations than what you find in the standard campaign run. There’s a perfect balance between mandatory and optional areas that caters to both casual and completionist players.

In a game where one’s reflexes and mental stamina is constantly tested, Celeste manages to push players beyond the point of frustration – but, somehow, in a completely satisfying way. The game rarely punishes players for failure; in fact, it encourages it. Keeping the controls and overall gameplay mechanics incredibly simple for a pick up and play style, there’s something incredibly peaceful about Celeste, no matter how challenging it becomes.

Players are pushed to the edge as they battle through Celeste Mountain in hopes of redeeming themselves within a battle against their own negative thoughts and the mountain that reflects those struggles. While the tight controls and exquisite platforming gameplay keep players coming back for “one more try” over and over, the touching story of a girl and her own skeletons to conquer brings the entire experience together. Line that up with an emotional soundtrack to gracefully guide the player to the summit of the towering mountain, and Celeste makes a near perfect example of when an enthralling game design creates an experience worth every impeding challenge.