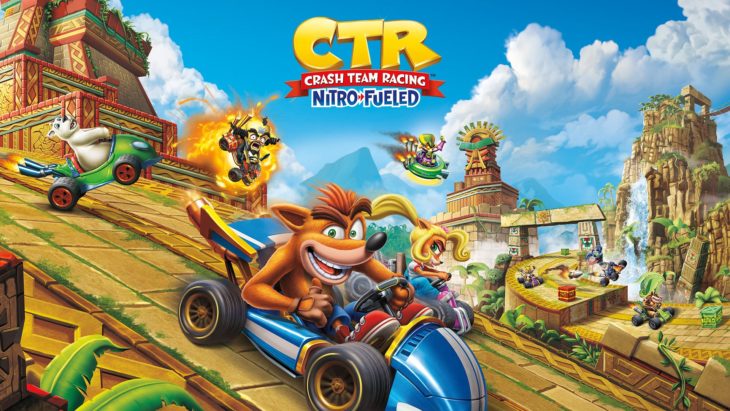 In the world of arcade kart racers there’s always been one dominating force for the genre – the ever-popular and prestigious Mario Kart series. While Nintendo has paved the way early on for the exciting and chaotic moments brought forth in the slippery racing scene, Sony’s iconic marsupial mascot gave the Italian plumber a run for his money when Crash Bandicoot entered the kart racing circuit. With Crash Team Racing Nitro-Fueled, developer Beenox reminds fans why the orange bandicoot claimed such a cult following with the kart racing spin-off; and manages to capture the very essence that made the original Crash Bandicoot kart racer so addictive while introducing various modern age improvements, yet retaining the same feeling from the original.

Check out our video summary review of Crash Team Racing Nitro-Fueled below:

The opening sequence once booting up CTR Nitro-Fueled alone is enough to bring nostalgia flowing back to your senses. Everything from the button input audio to Crash’s goofy trademark grin is reminiscent of the bandicoots’ debut into the kart racing scene almost twenty years ago. Players acquainted with the 1999 kart racer will immediately feel a sense of familiarity and excitement once launching into the game’s coveted Adventure Mode. However, along with these buzzing similarities also comes plenty of new features that can make any veteran CTR fan electrified for what awaits in the revamped experience.

The racing mechanics are what truly brought the world of Crash Team Racing to life. The drift boosting is a thing of beauty when perfected, creating a zesty and smooth drift experience that can leave players with an ultimately satisfying feeling once executed to near perfection. Hopping around turns, smacking that boost button at just the right moment and chaining boost combinations of threes together can make or break races against worthy opponents. While unlocking various customization items is a great method of retaining re-playability, mastering the game’s finer mechanics can push players to achieve a perfect line – which could net a few bonus unlockable items along the way.

All of the same characters from the original release make their return alongside a few newcomers for those maybe a bit more unfamiliar with the series’ sequel, Nitro Kart. With the character roster tripling in size and the additions of kart customization, it feels like a grand task to unlock everything the game has to offer – which does an excellent job of pushing completionists to try out every character in order to be rewarded with every skin and every unlockable item.
In addition to tons of new bonus items also comes a few different settings to decide on once firing up the game’s

Adventure Mode. The game now allows players to select between three different difficulty settings – easy, medium and hard – but also incorporates the original ‘Classic’ mode for those looking for a taste of nostalgia. When selecting to dive in the adventure on one of the selectable difficulty options, players will also be greeted with the option of changing characters to their pleasure when navigating through the various hub levels. Classic mode sticks players with their selected character throughout the duration of the adventure without the ability to swap between racers – more akin to the original adventure mode design.

Once deciding on how you’d like to experience the Crash Team Racing adventure players will be thrust into the story of the galactic nemesis Oxide plans to take over Earth, but not before giving the Crash Bandicoot cast a generally favorable chance at saving the planet. The adventure is broken up into five different hubs each with their own setting. Four of the hubs each offer four different race tracks to complete. Winning out the four races in each hub area unlocks the boss fights who typically challenges the player with an unlimited use of hazards to toss out during the race. It’s an unfair advantage set against the player, but with good turbo drifting skills and knowledge of each track’s layout can lead to success relatively pain-free.

After each boss the player will receive a key which unlocks the next area. Finish all four areas and you’ll find yourself head-to-head against the invading alien speed-demon, Oxide. However, the adventure won’t merely end upon your first victory over Oxide as there are other challenges – such as CTR Token races and Time Relics – to achieve and unlock even more in the game.

Returning to the Galactic, Kart-Boosting Adventure

While the racing is the bread-and-butter within the karting formula, the additional objectives that were embedded into the original game still satisfy as secondary means for a thrilling experience. CTR Token races requires players to collect the three letters “C”, “T”, and “R” which are scattered throughout each track. Finding and collecting these letters are only part of the challenge as players must also win the race in order to achieve a token. Each race represents one of four different colors of tokens and collecting all four of one color will unlock the relative colored Gem Cup later in the game

Relic races are unique time trials for each course within the adventure mode that requires players to reach a specific time. The twist in Relic races, however, is that achieving one of the times to unlock each course’s relic is significantly lower than a standard time trial. Players must smash through boxes scattered throughout the course, each marked with a number 1,2 or 3 which represents how many seconds the timer stops for. The idea is to make a solid run through three laps while simultaneously smashing through as many boxes as possible to achieve the lowest time possible. It’s a nifty little addition to the standard time trial mode, one that – even after twenty years – still seems pretty unique to the genre.

One last side objective within the adventure is the gem collecting challenge. There’s one of these in every hub and offers a change from the lap counting racing modes in other parts of the campaign. Players must navigate through various arena maps – the same ones that are also used in the game’s multiplayer battle mode – and must collect all of the scattered pink gems before the timer runs out. It’s a nice change of pace when putting the pedal to the metal and pushing out every drift boost in the various different races, but may require multiple attempts in order to map out your best method of attack on collecting every gem within the allotted time.

Throughout the adventure mode players will find themselves challenged by multiple means all the while unlocking new skins, colors and characters. If a skilled veteran returning to the game for the first time within the last twenty years, everything should seem familiar with very little change tot he overall formula. However, it’s still incredibly delightful to revisit the very same galactic, kart-boosting adventure that many of us refused put down so long ago.

Luckily, Beenox also added much more to the experience alongside the coveted Adventure mode. While the arcade races and battle modes make a return with local multiplayer, online modes have been added to the experience, as well. In this modern age it’s become normal to be able to test your skills against other real-life players, and Nitro-Fueled is no different.

While there’s the standard racing experience to partake in when dicing into the online portion of the game, there’s also a few other battle modes to consider. The normal battle mode has players duking it out in a selection of different arena courses filled with plenty of hazardous power-ups and obstacles. Either competing in team or every man for themselves, players will claim victory by either having the most points after a certain time limit or reaching a specific point total.

And if looking to break away from the traditional battle mode, other competitions like capture the flag, deathmatch modes, and new modes titled ” Last Kart Standing” and the new “Steal the Bacon”. Each mode offers unique strategy and team vs. solo experiences to dabble in. These new modes are an excellent method of engagement for those looking to take a break from the racing scene. And while often each mode rarely varies from one mode to the next, there’s enough diversity within the entire spectrum of the battle mode to keep things surprising and exciting.

Throughout the entire experience of Crash Team Racing Nitro-Fueled players will consistently earn Wumpa Coins. Whether you’re playing adventure mode or arcade, online or single-player – players will rack up their Wumpa Coin total. The in-game currency is used to purchase customization items, such as body kits, wheels, characters, costumes and stickers. Players can also unlock various items via character victories and accomplishing certain actions within the Adventure Mode. As of now, there’s no method of purchasing these precious Wumpa Coins with real-life money keeping the microtransaction discussions at bay.

For a remake, Crash Team Racing Nitro-Fueled brings new passion to a title that’s nearing twenty years old. Beenox managed to deliver the same feeling of the original design – with everything from track layouts to sliding around turns – while incorporating a few quality of life improvements and slapping on a brand-new coat of paint. With the addition of Nitro Kart tracks and a litany of characters and customization options, Nitro-Fueled takes an invigorating formula and makes it feel new again.

Fans yearning for the days of Crash Bandicoot’s colorful cast of characters duking it out in heated kart racing or PvP battle modes, Crash Team Racing Nitro-Fueled is as near a perfect a remake we could have asked for. While still retaining the very same feel of buttery smooth drifting and competitive spirit form the original, Beenox added quality improvements to the overall experience beefing up the replay value with kart customization and online multiplayer. In a genre dominated by Nintendo’s lovable mascot, Nitro-Fueled offers players a worthy option for players outside of the Nintendo playing field.