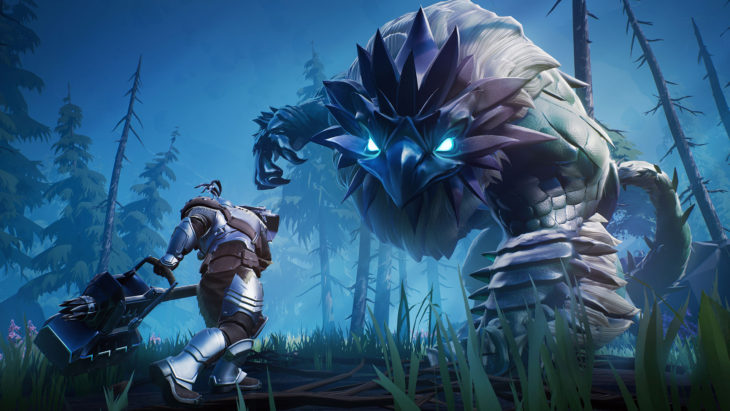 Slaying One Behemoth After Another

The industry thrives on unique experiences that takes players into new and exciting territories exploding with one-of-a-kind adventures and mechanics. Once these original experiences begin to thrive in mainstream entertainment other curators take note and adapt by adopting specific features in hopes of creating a similar experience under their own brand. Dauntless is one of these titles that looks to recreate the challenging Monster Hunter experience made famous by Capcom, but still incorporate a bit of its own flare to the overall adventure. But does Dauntless manage to introduce a unique experience to hold up against the monster hunting innovator; or does it merely bring another clone to the table that barely stands tall amongst its inspiration?

Check out our video summary review below:

Players who are familiar with the monster hunting experience will notice the similarities within Dauntless’ transparent formula immediately. The overall premise is the same: players equip various pieces of armor and a weapon from an assortment of different weapon types all crafted from monster parts and materials. Players will take on giant, dangerous animals referred to as “Behemoths” and explore maps to collect other crafting materials for tonics, bombs and other consumables.

The Power of Aether

Dauntless, like many other action-adventure game, displays the importance of patience in combat, strategy and relentless action. Players may team up with up to three other hunters when embarking on specific hunts. The hunts have players diving into rather drab maps which only feature one behemoth roaming the land. The designated behemoth must be taken down within a specific time limit before failure happens, but first the group of players must locate the behemoth. The hunts also allows players to stock up on both crafting materials for consumables as well as aether wisps which charge up your aether meter.

Aether in Dauntless fills up their equipped Lantern item. The lanterns are pieces of equipment that provides a set of unique abilities that can aid players on hunts. There are different lanterns available throughout the game each with their own useful features and effects. Each lantern has two different methods of usage – tapping the lantern button or holding it. Each method requires a recharge after using it which plays into the strategy during combat. The tapping lantern ability recharges over time while holding the lantern button is the more powerful ability and requires aether which can either be found throughout the map or collected after landing hits on the behemoth.

Instant abilities are used when tapping the lantern button and will provide hunters with modest boosts in various aspects of gameplay, such as increase in damage, attack speed or movement speed for a short amount of time. Holding down the lantern button activates the Hold ability are typically more powerful. Activating the hold ability can provide combat effects like various party stat boosts, bonus elemental damage or making it easier to track and find behemoths. The lanterns are a nice touch to the tactical advantages found within the many hunts players will tackle throughout Dauntless.

Along with the Dauntless exclusive lantern piece of equipment, hunters will also craft their own armor sets and weapons. There are a variety of different weapon types and if you’ve experienced the Monster Hunter series they should be pretty familiar. Swords, heavy axes, hammers, war pikes, chain blades and even repeater firearms all make themselves present in Dauntless and all create their own methods of mastering each play style. Weapons are crafted using various materials gathered from defeating behemoths, so the game does an excellent job of pushing players to take out one behemoth after another.

Hunters will also use the same behemoth materials to craft specific armor sets. Crafting full sets of armor helps to protect hunters at its fullest while also protecting hunters against specific elemental damage. Defeating fire behemoths grant players fire crafting materials, ice grants ice materials, and so on. Hunters use these elemental materials to create their weapon and armor loadout, while collecting elemental orbs allows players to upgrade their loadout.

The game pushes players to craft all types of elemental pieces of equipment in order to properly match up against certain behemoths. And Dauntless does an excellent job of informing the hunting party what weapons and armor sets are more effective against the behemoths, and which ones are particularly weak. Between fire, ice, shock and terra, all elemental types are important to craft and upgrade as players will need to take on all types of behemoths. Needing to strengthen your fire protection requires more fire orbs and materials which are collected by taking out fire behemoths. However, fire behemoths are weak to ice weapons so it becomes important to increase your ice weapon, as well.

The whole game follows along this system, and, while tedious, always seems to offer up certain tasks to follow in order to continue gaining strength. Like other monster hunting titles, hunters don’t level up their own state, but rather linked to the strength of their equipment. However, players won’t just find themselves taking on specific behemoths in order to strengthen their equipment to allow easier progression. The game’s online hub – Ramsgate – is home to quite a few NPC who not only offer their services like weapon, armor, lantern and consumable crafting, but also provide hunters with various challenges and objectives.

Hunters may explore Ramsgate and take on as many challenges that are available. Some of these objectives require players to take down specific behemoths while others task players with dealing a specific amount of damage points with a certain weapon or other combat driven challenges. While the meat of the game is embarking on a hunt, tracking and locating the behemoth and using skill and tenacity to defeat them, the side objectives allow for a bit of a deeper experience over the monotony of the “craft, track and kill” play style. Though, at some point you may find yourself buried headfirst in a deep cycle of tedious legwork of a behemoth slaying grind.

Along with the various weapon and armor stat and elemental effects hunters can also equip various mods and cells in their equipment for alternate effects. Hunters will find their own rewards consisting of cores which may then be transformed into cells. Cells are equipped in various slots of weapons and armor, adding different perks when those pieces of equipment are equipped. These cells follow a rarity system with green cells being uncommon, blue is rare and purple is epic.

When equipping these cells in various equipment pieces players can find some beneficial perks. Reducing stamina usage, increase max health, increase damage dealt and restoring health after certain actions are only a small selection of perks granted from various cells. Gathering cores to create more cells can be as enduring as finding them as rare drops from behemoth hunts or purchasing them using the game’s in-game currency or microtransaction.

It’s Dangerous Out There

There are also different types of hunts to undertake. Some hunts are easier and allow players to pick a specific type of behemoth to hunt, while others are a little more random but offer up much more fulfilling rewards. Dauntless offers a good mix of various hunting challenges along with a wide variety of behemoths to take on each with their own unique fighting style. Behemoths may also become aether charged or enraged in the middle of combat which increases their strength, defense and speed considerably.

When facing these tough challenges Dauntless also allows players to heave bombs and other consumable towards the towering foe. Only a certain amount of consumables may be equipped at a time, so it becomes important to understand what type of behemoth you’re setting out to slay in advance. And if things begin to get too “spicy” there’s a handy “Danger” meter in the top corner of the screen to inform you of the situation. The meter increases based on how much health you have left, your current party’s armor and weapon rating, the state of the behemoth – whether they’re in a normal, enraged or aether charged state – and how long you’ve been on the hunt.

Once the danger meter reaches 100%, it then becomes impossible to revive your party members until you lower the danger meter by either causing the behemoth to flee (which is impossible if enraged or aether charged) or you slay the behemoth. This is actually a pretty effective tactic for the game to forbid a hunting party from taking advantage of the infinite reviving system. While players are equipped with a number of revive shots, those number are limited and using your teammates to revive you could be an easy strategy for conquering the behemoths if not for the limiting danger meter.

When it comes down to it, Dauntless delivers a familiar experience in the world of difficult and enduring monster hunting action where Capcom first laid the groundwork. However, there are a few tweaks to the formula to invite a few different strategies to the mix, as well as being a much more inviting game when compared to other titles in the sub-genre. Where Dauntless shines is the more casual play style and overall understanding of the game that allows for casuals and newcomers to come together and slay a plethora of towering behemoths.

The much more approachable nature and free-to-play model of Dauntless is where Phoenix Labs struck gold with their multiplayer action-RPG. While the game still focuses on intense behemoth slaying along with various armor and weapon crafting and upgrades, all together it’s a much less complicated experience when compared to the often over-bearing nature of titles such as Monster Hunter. While many hardcore fans of the traditional monster hunting experience may be a bit put-off from the clear similarities between the two, that doesn’t mean Dauntless won’t provide an engaging and exhilarating adventure. If other challenging titles like Monster Hunter have left you feeling overwhelmed and frustrated, Dauntless may be the best title within the sub-genre to ease into the experience.