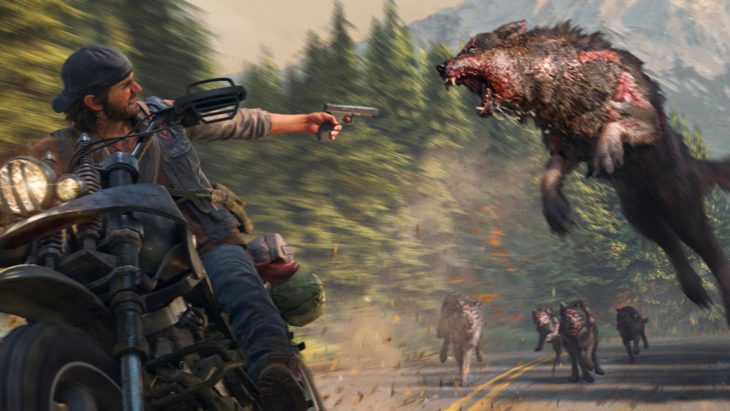 Days Gone is an open world survival adventure game that has players take on the role of Deacon St. John – a rough-around-the-edges member of the now disbanded biker gang The Mongrels. Oregon, as well as the rest of the world, has turned to turmoil as a “Freaker” infestation has stripped the world of any normalcy, leaving only the tough and most rugged humans alive amidst the post-apocalyptic setting of the wilderness in the northwest region of the US. There’s a very immersive feeling once diving deep enough into the thrilling world of Days Gone; as long as a few minor bugs and the patient style of survival gameplay doesn’t turn you away first.

Check out our video summary review of Days Gone below:

Players take on the role of the Mongrels motorcycle gang member Deacon St. John two years after a Freaker – the game’s zombie-like enemies – infestation leading to a post-apocalyptic setting. A wide open world of Oregon back country exists leading players through massive exploration of hidden discoveries, salvaging loot, hitting the broken highway on your pieced together motorcycle and surviving the nightmarish apocalyptic setting with a few friends and acquaintances surrounding Deacon’s narrative.

Like any other setting where the world has fallen apart due to zombie-like infestation, the game is eerie and incredibly tense. The open world allows for Freakers to creep up on the player from any direction. But it’s not just the mindless, corpse eating Freakers Deacon has to worry about, as several other factions make themselves present in the wild apocalyptic setting. While Freakers are clearly the enemy that has overrun the world most, Oregon is filled with other deadly enemy gangs, such as Marauders, cult-like Rippers and a couple of factions to be weary of.

In an emotional back story, Deacon St. John stayed behind in to Freaker infested Oregon area while sending his wife, Sarah, off on a helicopter to what he assumes is safety. Two years after the events during the Freaker outbreak, Deacon and his faithful biker gang companion Boozer have created a new life in the Freaker infested world – while Deacon continuously wonders about the whereabouts of Sarah. It’s a completely different world compared to the one Deacon and Sarah met in, and the story of survival has become the key aspect of life in the new, torn apart world.

There are tons of features and mechanics within Days Gone that are both immersive and entertaining. The survival mechanics create an atmosphere dripping with necessary tasks and objectives, such as looting for important salvage, wiping out Freaker nests and ridding the already dangerous map of as many raider camps as possible. Exploring in Days Gone is exceedingly thrilling as players drift from abandoned building to abandoned building, search makeshift campsites, breaking into now abandoned vehicles ditched on the side of the road and other various landmarks that ooze with possibilities.

There’s a satisfying feeling of weeding out lurking freakers or marauders in loot-heavy areas throughout the map, leaving the player open to quietly search through every nook and cranny for important loot. Scrap, medical supplies, weapons, ammo and other various craftable items can be obtained almost anywhere that looks like a prime location for looting. Looting on the fly is easy and simple to understand, making for a fluid experience that doesn’t rob the game of fun due to overbearing crafting mechanics.

And while the world of Oregon is largely composed of abandoned buildings, deserted towns and open wilderness, the last two years of Freaker infestation has pushed the sane survivors to creating safe camps. There are only a handful of camps available throughout the map which leaves tons of open road and hordes of Freakers in between each one. However, welcomed into each camp players may upgrade various elements, such as Deacon’s motorcycle, various weapons as well as take on bounties and other missions crucial to the main narrative.

While Deacon largely takes on the world solo, there’s a lively cast of support characters that are doing their best to survive in the brutal world. The dramatic narrative has Deacon cautiously running errands and pulling off jobs for various camp leaders – each with their own colorful personality perfectly nestled into the gripping world of Days Gone. As the player completes more objectives for camp leaders, Deacon is then rewarded with camp credits attached to whichever camp you completed the job for, as well as increases your trust rank.

The trust rank within each camp settlement allows Deacon to unlock higher tier weapons and bike parts. Deadlier weapons become available the higher your rank increases, while upgradeable performance, visual and paint jobs unlock for your bike. Performance parts become the most important factor as your bike is essentially your lifeline in surviving the threatening world. More advanced muffler upgrades creates a quieter motorcycle, while increased engine makes the bike much speedier for outrunning those massive hordes. Players may also increase handling, fuel consumption and protection for a more enhanced method of traversal.

While upgrading your bike over the course of time is essential in survival, ensuring your bike is properly running is just as important. Deacon’s bike will take damage when being shot at, ramming objects (or Freakers) or landing incorrectly when catching air from jumps. Collected scrap from under the hoods of vehicles, taken from enemy bikes or often found just lying around allows Deacon to quickly repair any damage, but players must also keep an eye on their fuel gauge, as well. Fuel cans are scattered everywhere which helps create a survival feeling without being too tedious. It never feels like a hassle to refuel your bike as the world is filled with mostly easily attainable fuel. And with the addition upgrading your fuel tank for longer trips between refilling is a welcome sense of progression throughout the course of the game.

Of course, where the game really shines is the Freaker hordes that appear as some of the more impossible scenarios early on. Throughout all of my time within the zombie subgenre of video games, Days Gone presents easily the best zombie hordes in any game. We’re not talking 10-15 Freakers lunging at the player; but rather dozens of raging Freakers endlessly chasing down Deacon. It’s easy to get overwhelmed by the looming hordes hidden within the world, even when attempting to take a horde down in the latter half of the game.

It’s a thrilling feeling to come ripping down the highway on your upgraded bike only to see a literal wave of swarmers quickly making their way towards the very same stretch of road you’re headed. There’s not many games that have personally made me shy away from taking on massive waves of enemies, but with Days Gone’s scarce ammo inventory and easy ability to become overwhelmed by too many Freakers, it becomes a viable tactic to simply turn and run the other way from a horde in order to fight another day.

That’s not to say that hordes are actually impossible. They do take a great deal of strategy and stocking up on supplies before taking one on, but once conquered, the gratification of success is all-too rewarding. That, and players may trade in bounties to camp settlements from every Freaker slayed for additional camp credits, so there’s a little bit of persuasion created by the game’s camp merchants. However, the game does throw several different types of Freakers at the player throughout the duration fo the game, so it’s wise to knowledge yourself on different Freaker classes – and the best ways to tackle each type.

The story in Days Gone won’t leave you speechless when all is said and done, but it can easily leave you on the edge of your seat throughout the experience. While Deacon St. John portrays what can be a rather overly edgy or over-the-top biker stereotype more often than not, it still manages to work just fine. The gritty atmosphere and setting created by Sony Bend is as immersive as nearly any open world game to date, and the characters that populate the Oregon landscape are quite memorable. There’s different personalities to create different types of situations, but the overall theme for the entire experience continues to lead back to one electrifying feeling: tense.

The mission setup has players taking part in numerous story arcs at once. Some may see Deacon taking out Ripper or Marauder camps, while others may have the player helping out at various camp settlements. The main narrative, while focusing on survival, stars Deacon and his best-friend Boozer who ran into some misfortune early on in the game. The narrative continuously hits notes on the importance of survival, trust and hope – while tieing in other aspects like forgiveness and friendship. Throughout the game Deacon struggles with trust issues, the heartbreak of losing the love of his life and the consistent battle between Boozer’s declining physical and mental health, as well as previous issues between himself and other camp settlers.

Like other Sony first-party titles, Days Gone creates a unique atmosphere with polished mechanics and stirring plot line. While you may not find an Emmy winning narrative along the lines of other more recent Sony exclusive titles, Days Gone does a tremendous job of tell its tale while sinking players into the wild wilderness that lurks within Deacon St. John’s many adventures.

There’s plenty to enjoy in Days Gone, especially if you’re looking for a patient experience brimming with stealth-based gameplay, open world exploration, easy-to-grasp and simple crafting mechanics, character and motorcycle upgrades and a world that easily keeps the player fully engaged and on the edge of their seat. And the game just feels great on nearly all fronts. Excusing the minor hiccups that may occur while exploring the open and dynamic world of the mountainous region of Oregon, Days Gone is an absolute thrill to experience. The formula of permanent stat improvements, proper motorcycle management, important scavenging detail and, of course, a thrilling narrative that creates a setting full of interesting characters, Days Gone does it’s job when battling the ever-present issue in the modern video game era of zombie – ahem, freaker – fatigue.