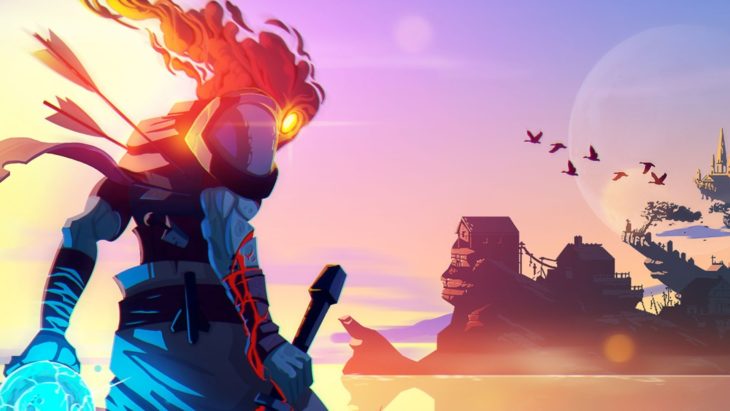 A Platforming Roguelike That Packs a Serious Punch

There’s an addictive presence within the world of action-metroidvania roguelikes that both challenge the player to the point of frustration, as well as pushes them towards an experience that delivers uncanny satisfaction. Motion Twin’s Dead Cells is a gut-punch to any type of traditional action-platformer that quickly shows its true colors during the difficult opening levels all the way through the relentless adventure of tight hack ‘n’ slash controls and tough-as-nails combat.

Check out our video summary review of Dead Cells below:

Dead Cells pits player against the elements that are presented in a traditional rogue-like experience. You take control of a failed corpse-like prisoner/science experiment and must make your way through a variety of different randomized platforming levels filled with deadly enemies. There’s a sense of open-endedness to Dead Cells that allows players to venture off in any direction and discover new items, weapons and upgrades.

Not For the Faint of Heart

The metroidvania roguelike style of the game offers players plenty of start-overs and instances from beginning the game at the start. Permadeath is a big factor to the formula of the game, offering unique learning opportunities, as well as a few permanent upgrades that will help players out in the long run. But not everything is based on the few permanent upgrades, as players will also find many new weapons and other stat upgrades to keep players churning through the game.

Throughout every procedurally generated dungeon players will come across new enemies and gameplay enhancement. There’s two modes of attack which may offer the player a subtle variety of gameplay attacks, such as quick melee strikes or distant projectile moves from weapons like bows. Players spend their adventure exploring different areas in each dungeon as they typically branch off providing players with the freedom to explore whichever direction they choose. Often times many of these pathways require various tasks to unlock certain areas or pit the player against hordes of heavy hitting monsters that block your path.

Along the way players will be greeted with locked doors that push players in a different direction. While the game itself is set up with numerous directions to take, each level has only a couple of exit points leading to the next area. However, spending time exploring every path may be incredibly worthwhile as you’ll often discover health items, temporary upgrades or extra cells which allow for the more permanent enhancements that help you out throughout the course of the entire game. It could be wildly detrimental if you try to speed your way through each level, leaving Dead Cells as a much more viable experience for the patient and explorative player.

Death is Only the Beginning

The tight controls for platforming and smooth combat mechanics offer up a simple formula to the game, but still presents a challenging experience. Death is a common occurrence within Dead Cells, and with every death comes the opportunity to try something different the next time around. While death will rid players of various items collected and push them back to the very start of the game, players still find a bit of progression in the game with a few different permanent stat upgrades that may make each new start easier than the last.

It’s this very cycle of death, learning, upgrade, restart, death that makes Dead Cells so approachable. No one likes dying in repeated fashion, but when you’re learning and fixing your mistakes along with increasing various elements of the game through permanent upgrades, it almost becomes exciting to see how far you can make it on your next go. Throughout every level explored and every attempt to beat the game, players will also unlock a variety of other stat boosts, weapons and health upgrades that keeps you on your feet for as long as possible. However, these more effective bonuses only stick with our character until you meet you inevitable untimely demise, but has a way of keeping players coming back for more to try to create the most dominant character with every playthrough.

Combat within Dead Cells demands fluid attacks mixed perfectly with timed dodges or blocks if you prefer a shield. Those looking to go head first into the combat can dabble in both single or dual-wielded melee tactics, while other looking to strike opponents dead may take advantage of range attacks brought forth by bows. It’s a tight dance between the player and enemy (or enemies), one that mixes perfectly executed blows with appropriate dodges. It’s easy to become overburdened by enemies attacking from every direction, so giving the adventure your full concentration is a must if wishing to succeed. At least, for your first playthrough.

And for those assuming Dead Cells is a relentless action game where maintaining your health while successfully wiping out enemy hordes – well, you’re not far off. However, the game becomes much more approachable thanks to the friendly hub areas between each level, as well as the merchant which may be found in nearly every level. Discovering the exit out of the level can bring a huge sigh of relief, as in between one level to the next is the “safe zone” which allows players to upgrade stat and abilities, as well as refill various heal and healing options.

Within the safe hub in between levels, players may take their time to craft various weapons, consume various mutations and advance your overall experience with permanent upgrades by using your collected cells. But perhaps most importantly, players are also able to refill their health vials as well as their entire heal meter before moving on to the next area. All of these options must be taken advantage every time you pass through a safe zone, so it’s important to ensure you acquire the best possible upgrades – regardless if they’re temporary or permanent.

Throughout the adventure in every level players will also discover merchant NPC who will help you out along the way. You’ll collect coins throughout the metroidvania, and spending these hard-earned coins can really help out a player in a pinch. Of course, often times player may come across a merchant when low on funds, but Dead Cells plays in the player’s favor by placing various teleportation checkpoints all along each level. Simply passing over these portals activates them which then allows players to transfer between activated areas, making for a quick method of travel during those more enduring areas.

The game also has various areas of the game locked behind several upgrade runes. Upgrade runes provide players with permanent environmental abilities that unlock once you’ve retrieved the corresponding rune. These unique abilities are triggered at specific points in the game, such as sprouting climbable vines to reach higher ground – just as one example. Once a player is reward with an upgrade rune the player adopts this new ability for good, leaving many new areas open to explore throughout the game.

And to consistently feel an increase in power and overall player level, various upgrade scrolls may be found throughout each level. These scrolls act as temporary upgrades that boost specific stats depending on the color of the scroll. Red, green or purple all correspond with specific elements of the character, such as boosting melee attacks or stat buffs for usable traps. The traps act as secondary weapons and can turn a tough situation into much more manageable instances. Every scroll adds a percentage of a boost to your overall health on top of its primary effect with every scroll decreasing its health boost percentage with every find.

Throughout it all, Dead Cells is an incredibly well-paced yet white-knuckle experience from start to finish. While starting over from the beginning after every defeat feels like wasted time, the ability to consistently increase various personal traits and learn from your every mistake creates a new experience with every retry. Dead Cell may not be for the faint of heart, but it shines beautifully to those looking for the next great challenge presented in its colorful indie aesthetic.

If you’re looking for a casual platformer with a dash of button-mashing combos – it’s wise to look elsewhere. Dead Cells demands player concentration and will surely hone your skills and reflexes with every enemy encounter. There are tons to discover deep within the difficulties of Dead Cells as well as plenty to unlock along the way. While starting over repeatedly throughout the experience may feel overwhelming and off-putting at first, the tenacity to stick with the grind pays off, not only in the end – but throughout the duration of the adventure.