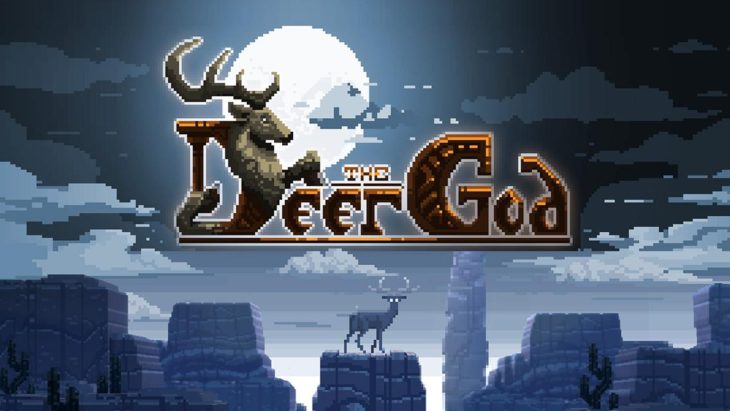 The Deer God from Crescent Moon Games is a nature-loving pixellated platforming game that pushes the player to survive the harsh wilds as a delicate, but adverse buck. In this beautifully crafted, randomly generated seamless level design is as unscripted as they come. Paired with the twist of becoming the hunted makes for a memorable experience, now available on Nintendo’s hybrid Switch console.

The game opens up with two hunters both suffering from a lack of action during their late night hunt. As one decides to call it in and head to camp, the other relentlessly stays up to find his prey. In a stroke of bad luck, said hunter perishes to the other side, only to be miraculously reincarnated, as none other than the innocent victim that only seconds ago was sitting at the end of his gun barrel. Now taking the form of a deer, players must survive the dangerous wilds by hopping, dashing and eating their way through this pixellated adventure.

Upon taking the appearance of a nimble fawn, players will use the jump and double jump actions as a primary source of travel. Most obstacles found throughout your seamless journey across different landscapes and climates will require precise platforming and the ability to charge any foes standing in your way. The game is a randomly generated side scroller, so new surprises come the first few times you start out the game. However, after a few long runs through the game, players will more often than not begin pick up on what’s coming next, randomly generated or not.

That being said, The Deer God still provides an experience that’s pretty unique to the platforming genre. Yes, becoming a deer and learning to respect the nature around you is somewhat of a hidden message to mind your surroundings and understand the cycle of life, but aside from the theme, the gameplay is somewhat intrepid as well. As you run through the levels as an agile deer, there will be threatening wild life you’ll have to defeat, but also specific animals which can aid you in your journey as well.

As you pounce around from platform to platform, the days continue to cycle through. The further you tread the more the climate and scenery will change around you. With the climate changes comes new predators to either defeat using your head-butt move, or simply flee before taking too much damage. Avoiding or taking on these enemies is the bleak combat in The Deer God, still providing subtle challenges when traversing the lands.

The player may notice three meters in the top left corner of the screen. With the lack of any explanation to what any of these means, it may take some time to finally realize what each meter does. One is obviously a health meter which depletes from taking hits from foes, which also regenerates slowly after enough time has passed. Another is the stamina meter which depletes after major offensive moves, like the head-butt, are performed. The third is the hunger meter which slowly depletes through time. Consuming wild shrubs and berries helps to replenish the hunger meter, as if it empties entirely your health begins to empty as well.

A Small Dash of Depth

Throughout the game, players will have the opportunity to interact with random characters, who will then ask a small task of you. These little side quests help boost the play value, as well as give the player something to do when aimlessly hopping along the sidescrolling pathway. The tedious fetch and grab quests help aid players along the linear level design, but keep the little fawn alert when scavenging the hidden areas tucked away throughout the game.

As players continue forward, random boss encounters will likely appear. One such giant toad is an early example, giving players a massive leap in difficulty when compared to the random enemy animal encounters. There are numerous giant animal bosses that sporadically spawn throughout the game, however, only a couple are required to beat the campaign.

As players run through the randomly generated levels, defeating foes becomes easier as your doe-like hero unlocks new powers. God-like statues representing the image of an elder deer are scattered randomly throughout the game, in which unlock various powerful abilities to increase your deer-like strength. There are almost a dozen powers to unlock, from something simple like the Light power which brings blocks towards your deer automatically, to a blazing fireball. These unique abilities definitely add a much broader battle mechanic to the graceful platformer.

The Deer God has been around for a couple of years now, but for the first time it has released on Nintendo consoles, most importantly the hybrid Switch. Playing this fun, nature filled platformer is a great addition to the big N’s lineup, especially for the low asking price. If you’re looking for a new and unique sidescroller that brings a new twist on the genre, The Deer God is a great start.

Whether you’re looking to dive into a new platformer, discover a natural, pixellated world, or just prance around as a graceful deer, The Deer God – which is now available on all major consoles – is a fun, inexpensive route to take. Crescent Moon Games has created an idiosyncratic title that’s perfect for the ‘pick up and play’ fans and die-hards alike.