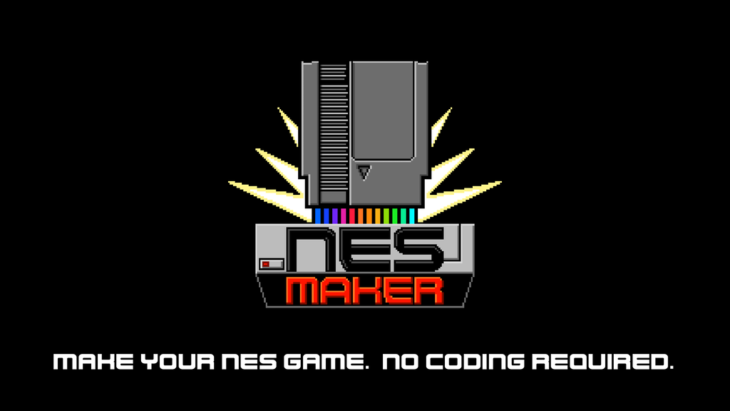 A Simpler Way of Creating Your 8-Bit Games

It’s no question that indie developers, amateur game designers and gaming enthusiasts all dabble in creating their very own 8-bit nostalgic inducing games, especially when first starting off. With the rise of technology giving birth to gaming software like RPG Maker and other easy-to-use game developing tools, one studio is making the NES retro era titles much simpler to create for young game developers and enthusiasts alike, utilizing their own developing tool – NESmaker.

We, as a consumer, typically only think about video games as a form of entertainment and release from the everyday grind that comes with the confines of life. But deep down, many of us have ideas for the gaming world that we feel have never been tried and attempted in the gaming industry. Reaching these endeavors and creating a gaming experience that shadows our own logical thoughts and ideas is easier said than done when speaking of developing your very own title. Only the tried and educated in graphic design and coding are able to follow the path of creating these modern wonders we call video games; a practice the team The New 8 Bit Heroes is beginning to simplify for broader audiences.

Never Needing to Know A Single Line of Code

Without having to learn a single line of coding to create your own 8-bit retro NES title, NESmaker will give users a simple and easy-to-use method of not only creating, designing and testing your master work, but flash a copy over to a Nintendo cartridge for the ultimate retro experience. An experience, I should mention, you created.

The product tool was created out of frustrations with an old method of prototyping and testing games. The development team wanted to create something to help ease the pain of going through the process of scavenging through lines of code every time a change or manipulation needed to occur. To shorten up the process, the team headed towards their idea to tighten the entire ‘what you see is what you get’ coding tool, while creating a new development tool altogether. With the help from veteran tool developer, Josh Fallon, NESmaker has started its dive into the development process, and the team has asked Kickstarter to help fund this project.

Similar to software like Adobe Photoshop or Illustrator, NESmaker uses its own code so the use doesn’t have to. A user-friendly interface assures players will have a detailed and exciting experience while creating a unique game to the best of their ability. Cutting down on the costs to learn and work with specific coding programs, NESmaker molds a creative experience that lacks the modern frustrations that come with developing video games.

Create More Than Just One Style of Genre

As it stands, the NESmaker engine is only capable of running the classic adventure genre of games. Currently the engine runs screen-by-screen adventure-like titles, utilizing the minimum amount of ROM space it takes to run the game. However, the team is fully capable of increasing the amount of unique modules to run different types of games, such as RPGs, brawlers, side scrollers and eventually arcade like shooters. With the help of the Kickstarter campaign, these different modules will become available to use and create your own style of game.

These modules only act as base modules for the genre specified. With the appropriate creative spark and drive, users will be able to create a slew of other style of games depending on how they choose to tackle the process. Creating a metroidvania style of game can be done in either the platforming module or adventure module, simply by tweaking a few of the properties. The shooter module can be used to create a runner style of game, while the brawler module can have users creating their own versus fighting style of game.

With all of the options seeming almost limitless with this intricate developing tool the team has also stated they wish to include a blank module. For those who desire to build their game from the ground up, the blank module will allow users to do exactly that. No pre-made modules or programming, this module only has the necessary attachments to ensure the engine runs alongside the NESmaker software; everything else is completely up to the developer at hand.

Currently, NESmaker is capable of pulling off a decent amount of developing tasks in an easy-to-use fashion. Designing your own sprites and color palettes, creating your own strings of text for NPC characters and creating the oh-so needed special screens, like start, end and title screens. Customizing AI, a broad sense of creativity to make your own adventure titles, basic RPGs, basic brawlers and basic shooters, as well as simple one-click testing on an emulator to try out your latest work. All of these scenarios, events and customizing options are only the start of what the NESmaker plans to do in the future.

Along with the use to create your own NES game using intricate features without the user needing to know the coding language, players will have the chance to use flash cartridges to fully experience their game on the NES console. By utilizing the broad power of the MAPPER 30, players will have the ability to flash save, which comes with the ability to rewrite over cartridges and to enable in-game saving using flash memory, instead of the less popular, in-cartridge battery back-up option.

Creators of all skill levels can see benefits from using the NESmaker for creating their own library of 8 bit games. This tool was specifically designed to create a hassle free experience when creating and digging into your game’s code. With the addition of different genre modules and easily accessible interface, NESmaker is looking like a solid tool to help pour out even more of the 8 bit love spreading through the gaming community.

Head On Over to Their Kickstarter Page to Contribute

The days of waiting for the next 8-bit NES style indie games are quickly coming to a close, as NESmaker will allow patient players to create the ideas that flow through their imagination. Whether you’re an experienced developer looking for an easier method to create your next work of art, an amateur game designer looking to get a simpler look at creating your own unique retro titles, or perhaps a curious gamer just testing out the waters and seeing what comes out, NESmaker looks like it could be a game changer for the gaming development industry.

Check out the team’s Kickstarter page for a bit more on the NESmaker funding page. Now less than a week underway, the page has already received almost all of their initial pledge goal. But the fun doesn’t stop there as more funds are needed for the extra modules, including the blank module. There is also plenty of Q&A’s and the risks and challenges of diving into such an ambitious project.

Find out more on the impressive work of NESmaker, and the goal to come closer to bringing this creative tool to the public.