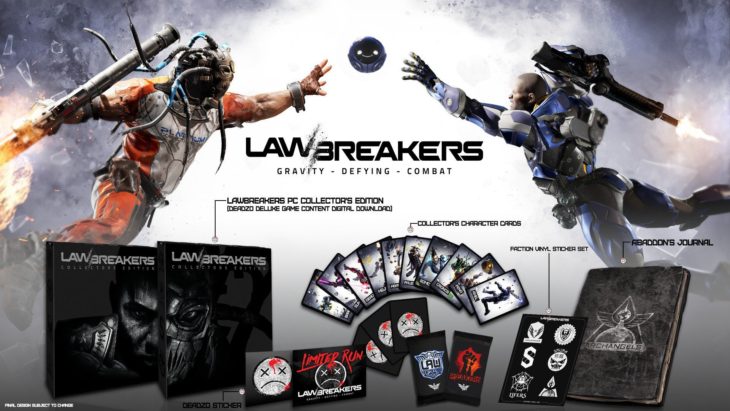 Boss Key Productions has been holding regular Beta tests for their upcoming arena shooter game LawBreakers. So far, the tests seem to have gone very well, and the developer confirms that one more Open Beta will be taking place this weekend.

The final Open Beta will take place between July 28th and the 31st. It will begin at 7 am PT/ 10 am ET and will end at the same time on the 31st. The game is now available for pre-loading so players aren’t forced to waste any game time by downloading the game. Everyone can be ready to launch the game as soon as the Open Beta goes online.

There’s also a special content going on for North American users on PC. Those who play at least three matches within the first four hours will be entered into the Early Bird Beta Contest. The  reward for this is a Replica Aerator Rifle or a 1080Ti graphics card. This is exclusive to America and only for those who play three matches within the first four hours of the Open Beta.

To match this new Open Beta, the developers have released a brand new trailer. This trailer is for the Battle Medic class and can be seen below.

LawBreakers will be releasing this August on the 8th. It will be selling for $30/£25 however the Deadzo Deluxe Edition costs slightly more. This version comes with 6 exclusive character skins, weapon skins and a unique account portrait. The developers have previously confirmed that they will not be selling new maps, character roles and modes as DLC. Which is great news for those interested in the game as the community will never be split, and it allows everyone to explore what the game has to offer.

You can check out the pre-orders for the game here. If you’re interested in the Open Beta you can pre-load the game on Steam here.