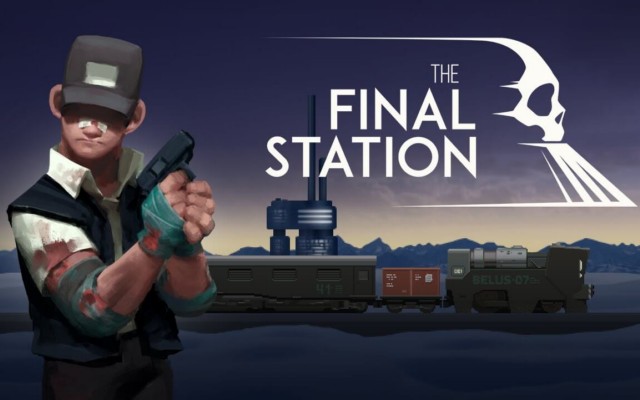 All Aboard Your Final Stop

The Final Station creeps into the 2D side-scrolling realm with ominous tones of survival and desperation and now available – including the DLC The Only Traitor – on the Switch console. With a chillingly haunting world and expansive sense of exploration within each of the world’s many levels, Do My Best Games delivers captivating 2D shooter with a subtle blend of strategy, survival and enthralling adventure.

You start off in this pixellated adventure as the lone train conductor making his way through a constant series of train stations. Amidst the early stages of a postapocalyptic style of world, things begin to grow darker and drearier as you continue down the railroad system. Mysterious beings represented as pitch black zombie-like humanoids begin sprouting up, in turn shutting off access to much of the cities and stations throughout world caught up in the exposed dangers.

The World Is Slowly Beginning To Change

The game concept is simple: Explore each area for the specific code to release the blockers standing in the way of your ongoing train. Each level grows much larger in comparison to the last, making for plenty of exploration and curious discoveries with every stop. Searching for the code requires often thorough investigation of the rooms, buildings and underground sewer systems available in each area. Aside from the necessary codes, there’s also plenty of useful loot and important supplies to keep players surviving throughout the journey.

Talking to the local civilians and military personnel, reading discovered lore and notes are all viable options for gaining some intriguing insight on what’s currently happening within the failing world. The blocker codes also come up within found notes and paper clippings, but players aren’t necessarily hindered to only exploring for blocker codes, as various survivors to take with you on the train and crucial supplies can be found in hidden areas of each level.

Gathering loot, health and food supplies, weapons and ammo are all crucial in keeping the train conducting adventure running smoothly. However, the more you explore the levels the more likely you are to run into groups of dangerous monsters in the deserted towns. Ammo is scarce often leading players to deal blows using melee attacks, like the butt of a gun, or your fist. While this particular combat method works decently well throughout the game, quicker enemies begin to show up on top of handfuls at a time, so the slower, less damaging melee attack isn’t always viable.

Throughout the game players will also come across a few safe havens leading to more talking points with civilians, markets for purchasing ammunition, medical kits and food, as well as a solid breather in between the thrilling survival points of the adventure. Of course, exploring and surviving the many different abandoned stations isn’t the only aspect of survival found in The Final Station. After all, you do take on the role of the only train conductor left in a world being overrun by dangerous monsters.

The Simple Strategy of Train Conducting

In between the various train stations where players must scavenge for the blocker codes, players must operate the train efficiently, as well as keep any rescued civilians on board healthy and properly fed. There are numerous assignments on the train to engage in periodically throughout the minute or so waiting time in between levels. The trick is to properly maintain the train while also feeding hungry rescuees, or applying precious med kits to the wounded. These sequences are great breaking points from the survival experience while adding a bit more depth to not only the back story, but the gameplay as well.

Station after station players will scour and explore behind locked doors, discover other lost and lonely survivors throughout the country and collect important supplies for keeping the ride going. The med kits and food consumables are extremely rare to come by, making the decision to either heal your own wounds, or save the medicine for the passengers back on the train a rather difficult one indeed. On one hand keeping the passengers alive until you reach their designated stopping point (usually the next safe station) rewards players with money and often precious survival supplies. While on the other keeping yourself alive in the midst of combat is the only way to proceed forward in the journey, making the effort to rescue the surviving civilians futile.

The Only Traitor DLC

Along with the package that comes with The Final Station on the Switch includes the equally as enjoyable DLC, The Only Traitor. Removing the mechanics of maintaining a locomotive filled with rescued passengers, players take control of a lone wanderer hitting the road in his American muscle. Different from stopping at every station as a result of the blockers, players instead stop at various town in search of the necessary survival supplies, i.e. food, water and, of course, gasoline for your ride.

The level setup is largely the same only instead of venturing out in search of blocker codes being pointed in one direction, players are now scavenging for multiple items that are located in either direction of the level. Our new hero comes equipped with a wooden board for a melee weapon which is significantly more useful than the base game’s punch/gun butt melee attack. Of course, as a result players will encounter much tougher enemies early on.

Players will also have the opportunity to rescue civilians, but in The Only Traitor DLC only one is able to fit in your car at a time. Each rescuee has unique stats related to crafting which is used to craft ammunition and med kits. Other civilians may have lower crafting skills, but greater health and hunger levels. Crafting is essential as throughout your romp across the wastes in your muscle car your of obtaining survival supplies if by the minimal discoveries, or the crafting method.

The Only Traitor is an excellent addition to the complete package of the zombie-esque brawler/shooter survival title, The Final Station. While keeping much of the tone and mechanics very similar, the concept and subtle changes in objectives is a refreshing break from the train conducting strategy found in the base game. Both play modes compliment each other extremely well making for a solid package filled with intriguing lore and addictively challenging gameplay.

While on the outside, The Final Station looks like just another retro stylized platformer. However, it doesn’t take long to realize just how different the indie game is from the rest of the herd. Between the unique railroad maintenance system, heroic deeds of rescuing innocent civilians all with interesting backstories, wiping out the hordes of threatening monsters and the complete isolated tone of panic, confusion and fear, The Final Station – along with its excellent DLC, The Only Traitor – is a perfect fit for the Switch console.