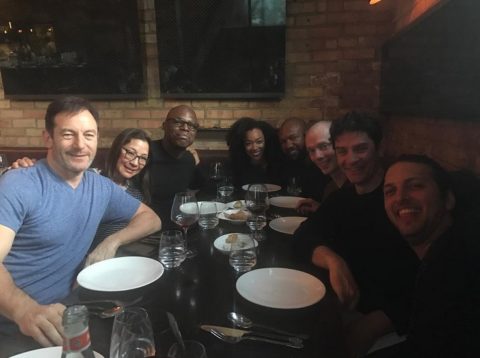 Last week was filled with Star Trek: Discovery tweets when the cast and crew of the new TV show arrived in Toronto, Canada to continue production for the new series. Alongside this, quite a few behind-the-scenes images were posted online however, many of the Twitter posts were removed shortly after posting.

One of the biggest tweets however is still available where Chris Obi posted a song about the Klingon language. In the post, he sings a song about having to learn Klingon for the show and about his frustrations with it. It’s nothing major but it’s certainly entertaining to watch.

A new image was released which shows the full cast of Star Trek: Discovery in a single group picture. Actor James Frain celebrated his birthday with some of the cast at a local restaurant in Toronto. The image was posted to Instagram by actor Chris Obi to celebrate James Frain’s birthday. This is the first group image for the cast of the new Star Trek show.

This is the first group image of the cast to be posted online and Star Trek fans should expect to see more coming over the next few months as the shows production is well underway now. Hopefully the team behind the show will have a launch date very soon.