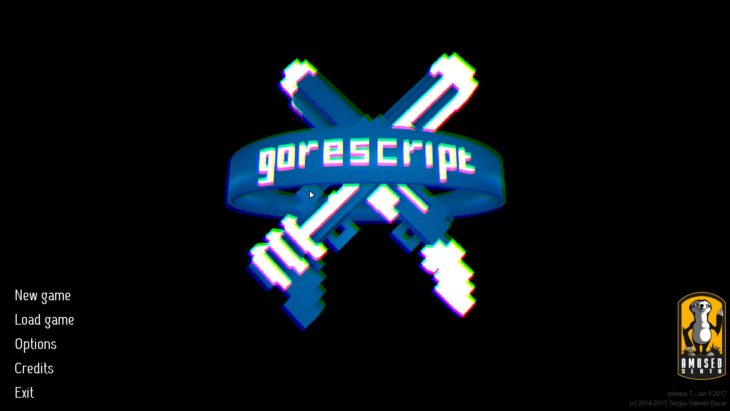 Gorescript is a FPS game that feels like a blast from the past, and in a good way. The game is clearly inspired by classic FPS games of the past such as Doom however it feels fresh enough to be defined on it’s own without being thought of as a ‘Doom Clone’.

The game is split between 18 levels for players to fight through in frantic shooting and dodging gameplay. There is no multiplayer in this game and it’s fully dedicated to single player which has resulted in a strong single player game that players can easily lose hours in. However, Gorescript is not a particularly easy game so it’s certainly possible that the ‘normal’ mode will frustrate some players.  For new players, the ‘easy’ mode is a nice introduction to the gameplay and allows players to get used to the game before moving up to the ‘normal’ and harder modes.

While there are 18 levels in the game, it has a huge replay value. In addition to the different difficulty modes, there are also several modes that change the gameplay slightly. The “Blackout” and “Permadeath” modes add some interesting gameplay mechanics to the classic version of Gorescript which bring a new level of difficulty to the game. In addition to this, it’s possible to check these options to play them on any difficulty level in the game. As a result, there’s a large combination of ways to play the game.

As to be expected from this type of game, there are a variety of weapons to be discovered across the game. Each weapon has a specific use which adds some strategy to the gameplay. In addition to this, there are other consumables and items to collect throughout the game. These items can be used at any point during the game. The fact that the game doesn’t automatically use the items is great. It allows players to save them for the engaging boss battles.

The biggest downside to the game is the fact that the “Strafe Run” mechanic is very underused. It seems to have been forgotten about in the later levels. This is a shame considering how satisfying and rewarding this mechanic feels.

Gorescript is a great single player game which brings the classic FPS genre back to life. This game could easily be the best the best game in it’s genre for 2017.