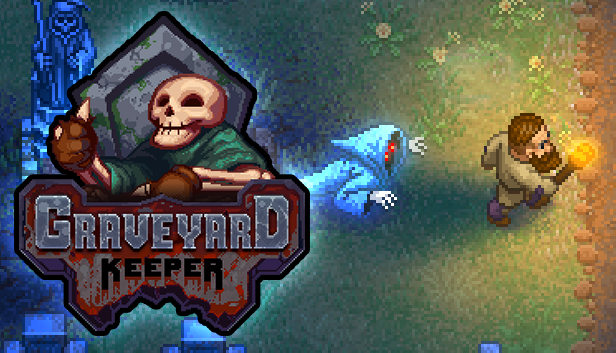 Welcome to Your New Duty as Keeper

Managing your own graveyard may seem like a dreary and adventurous career choice, but when it’s thrust upon you for any sort of mysterious reason, sometimes it’s best to make light of the situation. Graveyard Keeper takes this rather unsavory occupation and provides players with a charming survival-esque slash management sim experience that becomes increasingly more attractive the harder you work.

After an unimaginable accident your character awakes in a fantasy medieval world given the gruesome title of graveyard keeper. Meeting with a nearby talking skull named Gerry, players will begin their work in the interesting new landscape. Encountering obtuse citizens, gathering peculiar materials and managing the local graveyard to the best of your new abilities as the Keeper has become your only lead on returning to your world; so it’s best that you learn the ropes.

Taking notes from the popular Stardew Valley-types, Graveyard Keeper keeps players overly busy with menial tasks that continue to push the underlying narrative onward. With tons of options for keeping, gardening, smithing, building, and the likes, players will also take on side quests from many strange faces that make up this bizarre medieval world. While there may not be much for story within the depths of Graveyard Keeper, the addictive nature and combination of the many skills to learn is enough for players to lean on throughout the game.

Between travel time and constant scavenging you’ll find plenty to do and the constant day/night cycle will mix up various aspects of the gameplay. There are individual days of the week that the game cycles through, allowing different NPCs to appear offering quest logs and updates. Fetching fresh fish or crafting a number of ceramic bowls are just a couple of examples of objectives these interesting characters will have you embark on, while many more complicated tasks will also test your crafting skills.

The main objective you’ll see yourself coming back to is building up your graveyard and, eventually, opening up your very own church. While digging graves and decorating them with gravestones and fences helps bring up your total value, there are a few other, unsavory, actions that come into play.

A Plethora of Skills

Meanwhile, upgrading the protagonist’s skills is a valuable way to spend your time. Split between three different skill points – red, green and blue – players will obtain each specific color depending on whatever task they completed. Chopping down trees earns, green points, while crafting wood planks will earn your red. The coveted blue points are used to learn more developed skills and are earned by completing more advanced tasks, such as successfully studying specific items. Many skills take a combination of all three color of points so accomplishing everything you can earns you broader skills to learn.

As if your alcohol consuming skull friend wasn’t absurd enough to take in, players are also introduced to a task giving donkey who also drops off the corpses for your growing graveyard. Now, burying these point granting bodies is part of the challenge, but performing autopsies and acquiring miscellaneous body parts has its own challenges, as well. With every body buried each grave has its own point system tallying up to your total graveyard ranking. Burying more admirable corpses and carefully operating for strangely valuable pieces of human keeps the rank of each body higher, while keeping lesser corpses in the yard can have adverse effects on your rankings. Of course, you can always send unwanted bodies down the river.

Upon reaching your graveyard to a certain approved level, players will soon have access to the church which accompanies it. Becoming a parish priest enters your wheelhouse and comes with a slew of new responsibilities and skills. Performing prayers every week grants, the use of a study table helps bring in specific experience points and creating supplies unique to the alchemy lab under the church all add important features to the progressing gameplay.

Aside from tending the graveyard players have a sprawling map to explore. At first, certain areas are blocked off which can be opened by crafting various materials made from increasing your technology skills. Villages, towns, farms and wilderness await across the map, and in these diverse regions many unique characters await your assistance. It’s a familiar recipe for any RPG fanatic, and one that – while fits well within the game – never manages to pick up any worthwhile storytelling.

With so much to discover and an exorbitant amount of tasks and crafting options, the game itself hardly touches on introducing players to the basics. While a few hints and quests run players through prominent mechanics, you may also find yourself struggling in figuring out what to do next. Chopping trees for wood and performing autopsies for human parts might seem like the best use of your time, but it won’t take long to for your time to feel wasted after hours of harvesting. However, the more time you invest in performing new crafting solutions and increasing your keeper skills, the more entertaining the game becomes.

Graveyard Keeper is a grim outlook on survival and management gameplay with a unique approach to storytelling and character development. Chipping away at menial tasks and lending your helping hand to the many off-color characters does become rather enticing, but may leave many unfamiliar players wanting more.

A worthwhile experience for those looking to put in the hours towards successfully managing their own graveyard using less-than-tasteful methods, Graveyard Keeper is a delightful surprise. Whether you’re interested in harnessing your handy-man skills, or perhaps curious to see how much you can learn on the human anatomy – graveyard Keeper is well worth the effort of tedious crafting shadowed by a rather bleak world.