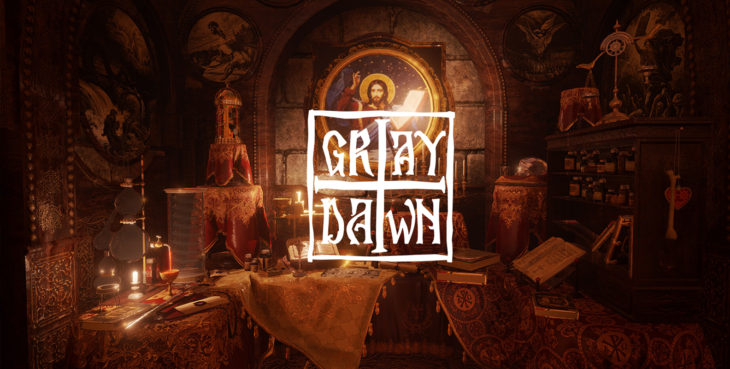 Unraveling the Mystery of a Ghastly Murder

Gray Dawn is a first person puzzle solving game with a psychological religious horror setting from the indie development team, Interactive Stone. Throughout the game players will become confronted with plenty of mystical and dastardly nuances that keep the game fresh across the riveting story eventually unfolding into twisted murder mystery.

As Father Abraham, players will embark on a dark and tormenting journey through nightmarish evils and twisted realizations of your past. Caught up in a missing altar boy mystery, you’ll find yourself searching for clues that prove your innocence where everything (and everyone) is subjectively pointing the blame towards the priest. Traversing the parallel vines of religion and otherworldly environments will uncover many hidden secrets, both about the truth of the matter at hand – and the Father himself.

Mostly coming off as a traditional walking simulator, Gray Dawn haunts players with grotesque themes and trivial puzzle solving as well. What seems like a bold mix between Silent Hill and The Raven, Gray Dawn entices the player just enough to meander through the 5 hour or so long story line with interesting narrative and a dark, thrilling atmosphere. There are no enemies to slay or weapons to equip, solely having players experience the shrills of the environment around them.

The objective of Father Abraham becomes crystal clear from the start as players explore and investigate every inch of their surroundings. Switching radio programs, interacting with specific items found around every corner and listening to the inner dialogue of our protagonist influence the player, constantly pointing you in the right direction of progression. The missing altar boy, David, is at the core of the investigation and the suspect at the top of everyone’s list is our dear Abraham; and he’s determined to prove his innocence.

Throughout the journey, mystical and bizarre occurrences take place – all of which revolve around the area of deep religious stories from Catholicism. Players explore one room after another eventually gaining ground on the mystery at hand, with each discovery sifting our player into a dreamlike world that’s inhabited by the voice of our missing altar boy. Within these transcending states Father Abraham is directed to solve a variety of puzzles in which pull us ever-closer to finding out the truth of what happened to David.

While Gray Dawn is mostly straight forward in progression and story, these dreamlike worlds do offer a chance at finding optional collectibles in pieces of religious based artwork, or tablets. Each realm has its own set number of collectibles which in the end may offer up some interesting pieces of information about the dreary world that seems so adverse in proving Abraham’s guilt. Collecting these tablets won’t add dozens of hours to the experience, only offering a subtle change of pace for each stage, but do allow players to venture off the beaten path – only if for a short while.

Interactive Stone’s imagery found within Gray Dawn is fluid with the ongoing theme of the darkness of religion, but never objectively paints religion itself to come off as evil. The actions of Father Abraham continuously grow more and more ominous, eventually leading players to a series of plot twists, as well as garnering a solid amount of intrigue within the dark world. The 1920s Christmas Eve setting fits perfectly with the surrounding theme and atmosphere, further creating a path of religious mystery and riveting tales of recognizable excerpts from the Holy Book itself.

While players may find themselves in awe with the twisting environment that wraps them so graciously, I couldn’t help but occasionally find myself within a rather stumbling world. Loading into levels only to drop through the ground into a never-ending void of light, or fighting the controls which seemed to become either delayed or entirely unresponsive hindered my experience – but only briefly. A quick restart of the game – after saving, of course – seemed to fix any issues I may have had, only minorly taking me away from the immersion.

Gray Dawn isn’t a perfect experience, but it is quite the experience nonetheless. The dark religious tones help create a thrilling tale of lies that continue to wrap itself in mystery. The puzzles found within Gray Dawn were never so off-putting that one should lose patience in a fit of rage-quitting anger, but also never seemed to really suppress the limitations of one’s mental stamina, either.

For players looking to engage in a casual experience and take a dive into a somber yet enticing journey, Gray Dawn fits this mold near-perfectly. With no intense action scenes or mindless AI enemies to slaughter, anyone expecting a button smashing, demon-slaying experience would be right to look the other way. But what Gray Dawn lacks in conflict, more than makes up for in story and surreal discoveries.