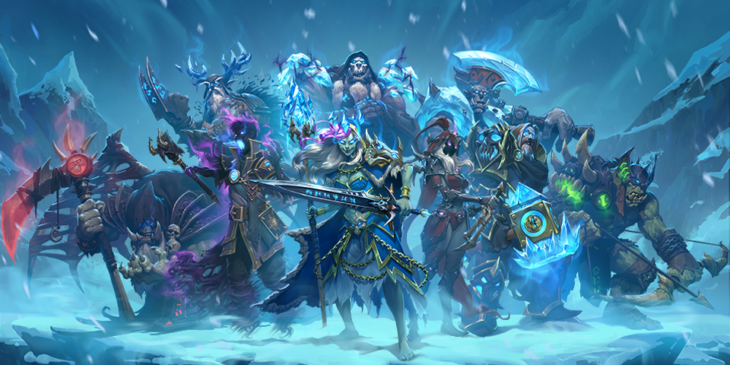 Blizzard has just announced the latest expansion for their digital card game Hearthstone. Knights of the Frozen Throne will be arriving later this year in August. As expected, there’s a ton of new cards and also new single player content for players to fight their way through. Blizzard has also found a way to add Death Knights to the game without actually adding it as a new class.

A new mechanic is coming in the form of Legendary Hero cards. These replace the current hero with an undead version which comes with a host of bonuses. It casts a Battlecry, adds some armor and provides the player with a new hero power. This revolutionary mechanic could completely change how the game is played and how players structure their decks.

One example of these new cards is “Deathstalker Rexxar”. It provides the player with 5 bonus armor, deals two damage to all enemy minions and comes with a very unique Hero Power called “Build-a-Beast”. This power allows the player to create a new minion by stitching them together. It merges their heath, attack, mana cost and card text. However, the creature is then added to the players hand for use later.

In addition to these changes, it also features a single player expansion. It seems to be called the “Icecrown Citadel” and challenges players to battle a variety of opponents. The Lich King himself will be the final opponent in this new expansion. The Missions from this expansion will be free to play. However, completing the missions will earn the player three card packs from the new expansion. In addition to this, completing the Prologue will reward all players with a random Legendary Hero card.

Just like with past expansions, there’s a special one-time pre-order option for the new expansion. Players can purchase 50 card packs for $50 for a limited time only. Doing this will also reward the player with a special card pack.

Blizzard has confirmed that there will be a total of 135 new cards with this new expansion. This includes the new Legendary Hero cards and also a brand new keyword. The new “Lifesteal” keyword brings another special ability onto the game field. It heals the player based on the damage that card deals. We don’t know if this ability is exclusive to attacks on other Heroes however as Blizzard hasn’t specified the details just yet.

However, the developer has revealed five of the new cards. This includes the new Deathstalker Rexxar card we mentioned earlier. Here’s the new cards:

Prince Keleseth: 2 Mana cost, 2 Attack, 2 Health. Abilities: Battlecry (Gives all minions +1/+1 if you have no 2-Cost cards in your deck)

There is no official release date for the Knights of the Frozen Throne expansion pack. However, Blizzard states it will be arriving in early August for all regions. As previously mentioned, players can purchase 50 card packs for $50 already. These card packs cannot be opened right now however. Players must wait until the expansion arrives in August. Only then will players be allowed to open their card packs and see what they’ve got. This will probably frustrate a few players but Blizzard has their reasons for operating this way.

Who else is excited about everything this new expansion contains?