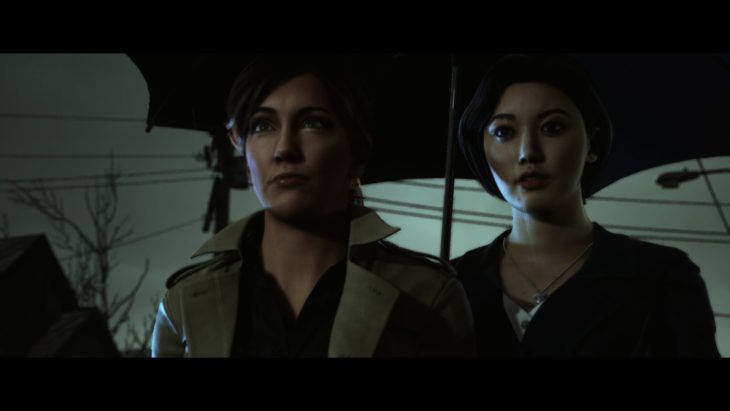 Use detective skills to solve the murder case of The Trapper

Action games have taken to narrative driven dialogue options more and more in recent years. Quantic Dreams designate their entire collection to the genre with releases like Indigo Prophecy, Heavy Rain and Beyond: Two Souls, while other studios are starting to adopt this form in a more casual manner. Another developer bringing the engaging form of gaming to the market is Supermassive Games, and their upcoming detective based action title, Hidden Agenda.

The continued rise of Supermassive Games

Based out of the UK, Supermassive Games have been running consistently since their debut in 2010. Working almost exclusively with the Sony brand of consoles, Supermassive have put together quite an extensive library of quality releases, such as Killzone HD to the Playstation Move title Tumble, and even a few Little Big Planet projects in the past. Of course, none of those titles had the impact that their stellar survival horror title had on the gaming community.

With the release in 2015 of the psychologically demanding thriller – Until Dawn – players found themselves smack in the middle of a cliché modern horror film. But unlike the niche films frequently created in the 80s onward, Supermassive put the decisions of the characters in the hands of the viewers. Every hair-raising moment provided excellent movie quality suspension with the added tense atmosphere of difficult choices that lay around every corner.

Trapped in a cabin located in the middle of the woods (how much more cliché can you get?), a crew of stranded teenage friends separate on the run from a ravenous murderer (that much more, apparently…) – Until Dawn expertly created a new way to experience the horror genre. By placing the responsibility of making the correct decision in a split second, not sure of what will happen next, provided the player with a new sense of suspense not typically found in other entertainment mediums.

Building on the narrative driven genre

Game features like these give a sort of personal approach for the gamer. Becoming attached to the characters as their story pans out, the player develops empathy and wants to push forward while making the correct decision. When difficult or challenging situations arise, the suspense that’s created when all the player can think about is “which move will be my last?” scenarios, leading to tense, dramatic and otherwise memorable gameplay. Specific developers shine when it comes to this type of storytelling and delivery on decisions, choice selections and so forth.

The next installment from the Sony exclusive developer – Hidden Agenda – brings the methodical and dramatic scenario of detective work during an ongoing serial murder case. Sticking with the tight and thrilling storyline with plenty of dialogue options, mulitple endings based on your decisions and gameplay focused around QTEs and deep storyline. Follow the case of The Trapper – a serial killer involved in many cases popping up around town – you’ll take control of Becky Marnie – a homicide detective working on the case, and the district attorney, Felicity Graves.

Popular developers, Quantic Dream, have also run with this route in a successful manner with their 2010 release Heavy Rain. Taking the role of a detective and a private investigator (as well as two other characters that blended into the story) surrounded by the Oragami Killer case, players would use QTEs and suggestive dialogue options which would tie into the ending of the game. What Supermassive does to keep Hidden Agenda diverse and unique has yet to be seen, all except for the use of Sony’s newest play tool PlayLink.

With the ability to use either you iOS and Android smart phone, casual players can chime in and offer help and strategy to the main player of the game. Certain narrative decisions may be voted on, allowing the player to wisely choose for the best possible outcome. These influential decisions can change the course of the game, while giving players from PlayLink their own set of agendas to accomplish. This, in turn, may set players against one-another giving a new twist to the genre.

Hidden Agenda is every bit a single player game as it is a multiplayer “PlayLink” title. With up to 5 local players being able to vote on decisions and mess with the story to their liking, Supermassive assures fans that the title can be enjoyed with a single player play through as well.

Will you solve the case?

The story of Hidden Agenda will run you through tough choices and fast reflexed button combinations across a thrilling tale following an ongoing serial murder case. The developers have stated that everyone in the game’s story is able to die based on the players decisions and consequences; taking advantage of the outcry from critics about Until Dawn’s limited choices and text options. This should help reel in even more suspense and drama when heavy decisions lay in front of players.

Hidden Agenda will be looking to stick to what made Supermassive a known developer amongst the gaming community. With their skills and talents being highlighted from their success of Until Dawn, the industry is eagerly awaiting the latest from the UK developers coming October 24th. The game promises to build on what made Supermassive’s take on decisions based narrative options – as well as crucial actions that affect the outcome of the game – so big in today’s gaming world.