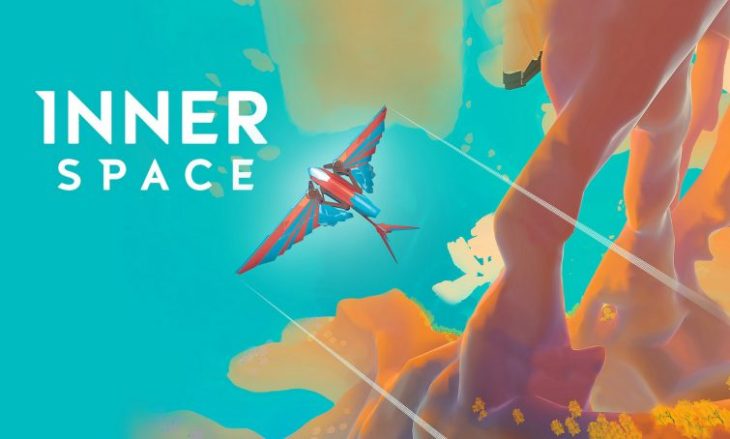 Dip Into the Inverse

The freedom of flying through an inverted space and exploring every nook and cranny in a beautifully created world is a subtle delight in the latest release from PolyKnight Games. InnerSpace takes players into a surreal world known as, the Inverse, in search of the last remaining ancient relics in a world on the brink of extinction.

Entering the interesting world of the Inverse, players take the reigns of a small flying drone. The drone was created by a submarine like character with the title of Archaeologist. Upon creating you, he has plans to send you – aptly named, Cartographer – out into the mysterious world and discover the lost relics of the Ancients. The worlds are full of vibrant and gorgeous visuals. The art alone is enough to win over any curious gamer. Gliding through the air in comes with the simple analog controls, but still take some time to get used to. The Inverse and other chambers are made up of an inverted globe; instead of flying around, you’re flying inside. It’s an interesting concept that works well enough without – for the most part – completely disorienting the player.

Enjoy the Freedom of Flight

The controls act as though they should be fluid while in flight. At a constant moving pace, players use both analog sticks to pitch, pan and bank in all directions effortlessly. Putting all of these motions into play with quick reactions while rapidly approaching walls and obstacles is much easier said than done while exploring early on in the game. After a few hours spent maneuvering in tight spaces in and around the Inverse, the somewhat confusing controls become a little more second nature. Plus, with the added ability to “drift”, making those sharp turnarounds becomes much more reliable when soaring through the Inverse.

The object of InnerSpace is to explore to your heart’s content and discover ancient relics that help upgrade your drone with new airframes – the shell of your drone, but also new lore about what happened to the Inverse. Discovering what occurred with the past civilization known as the Ancients, and why this unique world coming to an end. Finding these relics takes a keen eye to look through every crack, as well as solving rather simple puzzles scattered about the open areas.

The colors and shapes of InnerSpace are simple, but manage to create a striking atmosphere of air and sea. Like exploring the inside of a Christmas ornament filled halfway with water, players will spend much of their time switching between the winged airframe soaring through the skies to the underwater exploring submarine. There are discoveries and puzzles awaiting in both variations of the worlds, as the game pushes players to peak around in every area.

Unravel the Stories of The Ancients

Along with relics, players will also collect the white wisp items known as Wind. Wind is used to upgrade your airframe and gather new unique abilities to help players traverse the dense worlds. Laying in place in patterns throughout the worlds, players will collect Wind wisps in similar fashion to collecting flower petals in Thatgamecompany’s Flower. In fact, there are many instances where InnerSpace seems to adopt from other free exploration based games, such as Journey or Abzu, but still manages to throw in their own original ideas to expand on the exploration genre.

Though there is no punishment for death, the game still throws a few “boss” fights in the mix. If players to fail, they merely respawn to their last checkpoint save spot, which is never too far behind. The giant species known as “demigods” throw various challenges at players, but never really presents any real threat. Smashing into walls due to loss of control, or the simple fact of failing to get used to the flight system is far more dangerous than taking on these seemingly harmless demigods.

Limited by Lack of Direction

While the game is a beautiful spectacle, and the aimless exploration of the ancient worlds is refreshing after the struggles of modern adventure games, InnerSpace steps on its own toes when trying to point the player in the right direction. The lack of clues and vague puzzle solutions can be quite frustrating, as some may spend hours figuring out what to do next. As if mastering the flight controls aren’t enough of a task, looking around every corner, collecting every wind wisp, trying to make sense of what goes where or what our friend the Archaeologist is subtly describing can be enough for anyone to rage quit in an instant. Unfortunately, it’s hard to progress through the game without knowing what to trigger, or where to explore next.

InnerSpace is a unique exploration adventure set in a strange but curious world. With a great deal of story and dialogue, InnerSpace is able to take the thrill of freely exploring a unique world, and add the depth of a decently written story. Give the strenuous controls a chance to sink in, and the feeling of soaring through the breeze is as stressless as they come. Switch to the slick submarine-like drone and dive into the water portions of the Inverse, and find new discoveries that lay all over the surreal worlds.

The game looks spectacular and is a joy to play, knowing you’re never certain of what you’ll find next. The problem is knowing where to look or explore to help you progress through the story. More levels to explore and relics which unlock new airframes await the further you progress, but prepare yourself for a struggle when figuring out how to get there.