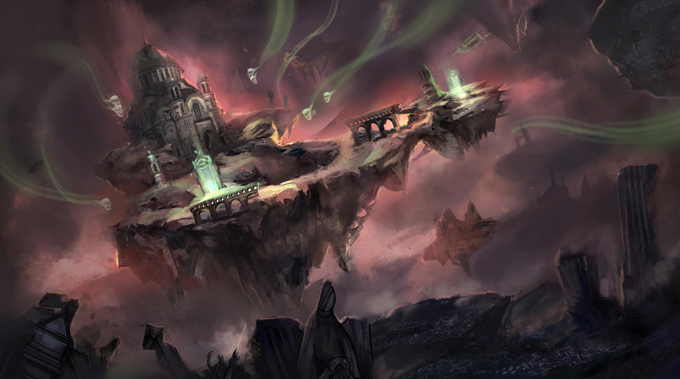 A new game currently being funded on Kickstarter is generating a lot of excitement in the gaming community. Indie game company Curious Panda is releasing their second title “The Iron Oath” with the help of some crowd funding. As of this writing, nearly a thousand backers have pledged over $27,000 to the game.

This tactical 2D RPG is set in a dark fantasy world which is formed of nine unique regions. There are over fifty cities and towns spread across the game for the player to visit. However, this isn’t a world that stands still. The map begins the same for each playthrough, but world events and player choices change this dynamic land. The choices made can modify the economic and political landscape. The events that happen can trigger a variety of events such as wars, the death of cities and even the collapse of a faction. These events shape the world and the missions that are available to the player. It’s an incredibly dynamic world with plenty to offer. It promises each playthrough to be different each time.

With so many choices offered in the world, exploration is pretty important. There are a large number of generated dungeons to explore, and they’re filled with plenty of secrets, traps and things that benefit the party. There may even be NPCs in them which require help or who are able to support you as you fight your way through the passages. Don’t take the choices lightly, though. The developers promise every choice will have repercussions, whether they be good or bad for your character and the land.

Combat is turn-based and takes place on a hex grid which varies in size and shape according to the environment. To make it even more interesting, there may be destructible objects on the field or traps to avoid. As to be expected, combat is highly strategic where the location of battles can force players to modify their combat strategies. This will surely make the combat difficult, yet hopefully just difficult enough to be an interesting challenge. The game will be launching with 12 unique characters with 6 different active abilities. However, the developers have plans for 9 other classes also.

There’s also a management aspect to The Iron Oath. It comes in the form of a Guild where the player can decide what type of guild they want to be. In addition to this, it’s possible to recruit a range of characters who all expect fair payment for their work. Managing this is sure to be tricky.

The graphics have a slight retro feel, reminiscent of the original “Diablo” in a way, but are executed beautifully throughout the game. It is evident a lot of skill and talent went into the development of this game. The pixel art in the characters and the surrounding environment is exquisite. Even down to the items in the bags, the artwork is very impressive. Even staunch “anti-pixelists” are admitting this game looks too good to ignore.

It is interesting to note, they are not “pixel purists” in all regards. In the early version of the game, the text was also pixelated, but was very hard to read. In a forum, one of their artists mentions they will (and obviously have) changed the font to a more readable version instead of the pixelated one. He admits they are not 1:1 pixel purists throughout the game (note some glow effects on certain objects) so they might as well make the font readable.

The developers and team behind this game seem very dedicated. They are reaching out and talking with the gaming community via forums and social media. They are quick to answer questions and are very forthcoming with details about the game. It is very refreshing to see developers who are enjoying their work and interacting with the gaming community.

The debut of this game will be very exciting. It will be interesting to see how the different choices offered in the game affect the gameplay. This will be a game you play several times just to see how your various choices will lead you down different paths.

You can find out more about The Iron Oath on the Kickstarter page here. The campaign itself is pretty interesting. At the higher donation levels, supporters can actually design various elements of the game, ranging from journal entries found on corpses all the way up to a full two-stage mission.  If you have the funds to donate, you can literally be a part of the game creation.

Check out the trailer below and let us know your thoughts on this new game in the comments!