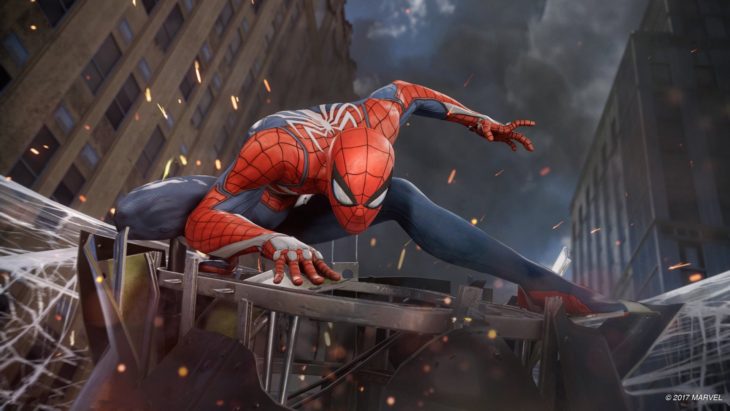 The world of superheroes within the video game industry has risen substantially over the last decade and it’s all thanks to the Dark Knight and the team behind the gripping Arkham trilogy, Rocksteady. And while they’ve managed to engage fans with visceral combat mechanics and a real feel behind donning the cape crusader’s iconic attire, it seems a new ultra-powerful super human managed to successfully take on the reigning DC Comic star, and, of course, it comes from non-other than Marvel. With Insomniac’s close attention to detail and near-perfect representation of traversing Manhattan over rooftops and taking on a dozen baddies at once, Spider-Man on the PS4 is the ultimate package of what we now want from a superhero game.

Check out our video summary review of Marvel’s Spider-Man below:

Player’s dive into the agile world of taking on the reigns as Spider-Man in a bit of a different take from the standard approach on the beginning of the adventure. Rather than experiencing the beginnings of how Peter Parker became the web-slinging wall-crawler, players are introduced to a veteran Spider-Man. Spidey has been at it for several years, taking down villains, gangs and thugs throughout the sprawling metropolis of Manhattan. However, just because Insomniac’s Spidey is a more experienced superhero doesn’t mean players won’t be learning new abilities, constructing new gadgets or unlocking new skills. While Peter Parker may be adjusted to his new lifestyle as Manhattan’s protector, it doesn’t mean there’s not still plenty of new things to learn along the way.

What will grab players right off the bat when taking the dive into Spider-Man’s shoes is the incredibly satisfying, acrobatic feel of swinging through the city. While simultaneously feeling authentic with Spidey’s webs only attaching to available structures in the vicinity, the way web swinging works is almost therapeutic and gives the player absolute freedom of traversal. The entire process of swinging is simple, yet all-too rewarding. One simple hold of the R2 button allows Spidey to swing while releasing the button releases the web. It’s this tireless action that creates a gratifying feeling while players sift through the tall skyscrapers that litter New York City. But along with the simple one-button tactic of web swinging also comes a flurry of other maneuvers to keep the traversal incredibly dynamic.

That’s not to take away from the acrobatic and agile combat, however. While web swinging through the city strikes a chord of therapeutic freedom, the combat in Spider-Man is about as aggressively flowing you could hope for. With a take on what Rocksteady was able to accomplish within the Arkham Batman series, Insomniac takes it one step further as Spider-Man allows for more aerial combat and ranged situations. Striking down groups of enemies with fierce melee attacks, utilizing high-tech gadgets like electric webs or throwable bombs, and the helpful usage of the diverse selection of suit powers, fighting as an untouchable superhero feels as brilliant as ever.

Combo attacks come easy with simple button inputs for basic strikes while other buttons control the ability to latch on to opponents with web throws, disarm foes from afar or tie up attacking opponents with your web blasts. Taking on multiple enemies from all different distances – whether ranged or close quarters – feels incredibly well-executed and allows for players to come up with strategic maneuvers on the fly. The button layout for all attack patterns and abilities creates a fluid motion of precise button inputs that seamlessly strings together fierce attacks and clever gadget usage.

There’s a good variety of gadgets to unlock and equip throughout the game. layers may only have one gadget equipped at a time, but switching from one to another only takes a quick second before back in the action. Web bombing foes may prove essential in tight situations, especially when enemies are near walls or other physical objects that can lead to them being permanently webbed up and out of the fight. While other encounters may call for the quick shot web shooter to tie up opponents or the electric web to string along a series of electrocutions from enemy to enemy.

But where the combat really begins to shine is the numerous ways to customize your approach using the special suit powers and mods. Out of the over 30 suits to unlock, each one comes with a special suit power. And suit powers aren’t tied down to a specific suit, allowing players to mix and match between different powers with alternate looks for Spidey. Some suit powers may prove beneficial for defensive maneuvers, while others provide powerful offensive abilities. However, suit powers may only be used once after every recharging period, so timing on when to use each one is crucial.

And to go along with the customized approach is also the three different mods to equip. Mods are passive techniques that help players in specific situations, such as reflecting bullets, increased XP rewards, slowing down time for last-minute attack dodges or simply increasing the your Focus meter regeneration. With tons of different mods to choose from and only three slots to equip mods, creating the best formula for the players presents a truly customized approach to combat.

Finally, players are able to perform powerful single action take downs by utilizing the game’s Focus meter system. Landing attacks or successfully dodging attacks fills up a portion of Spidey’s Focus meter. When full, the Focus meter allows the player to perform incredibly powerful strikes – or if you’re in a tight pinch, may be used to help regenerate a portion of Spider-Man’s health. Whatever the case, the amount of diversity within the stable combat system offers players a sense of freedom when tackling relentless waves of enemies. It’s an incredibly fitting feeling when donning the Spider-Man attire, meshing perfectly with the agile traversal component and iconic web shooting ability.

And while the embodiment of Spider-Man strongly represents soaring between skyscrapers and effortlessly taking down waves of grunts and thugs, no open world game would be complete without additional side activities and collectibles. When not tackling the completely entertaining and diverse story missions of Peter Parker and his web-swinging alter ego, players can patrol Manhattan for a variety of different crimes taking place throughout the city. And nearly each and every side activity or collectible obtained grants players with specific tokens which may be redeemed for new suits and gadgets.

There’s a variety of photos to snap of iconic New York City landmarks, collectible backpacks scattered throughout the city left behind by a younger Peter Parker just beginning to get his webbing down and even pesky pigeons to chase and capture in order to return to the owner. There’s a nice diverse line up of optional side activity to keep players from growing stale on mission after missions – or at least a break from taking down the many enemy encampments – of which throws wave after furious wave of disgruntled enemies at Spider-Man.

Each different side activity offers up specific tokens which are then used to construct new suits which comes with new suit powers, as well as new gadgets to arm yourself with. Not only are the many different types of side objectives mostly enjoyable throughout the every last one, but can be modestly rewarding upon completion making it more than worth your time away form the main narrative. And if you feel like just taking to the skies and swinging throughout Manhattan encompassing the full feel of becoming Spider-Man, there always seems to be optional crimes to weed out as Parker picks up police scanner audio as he patrols the city skyline.

With so much to admire with Insomniac’s latest title in their illustrious library of video games, Marvel’s Spider-Man is a true successor in the superhero genre. With an all-too appealing feel to swinging through the city, a plethora of fun gadgets and collectible suits, suit powers and combat abilities, and an original story that rivals the late, great Mr. Lee himself, not only is Spider-Man a must-play for any comic fan – but anyone looking for a truly inspiring and all-out thrilling ride through one of the world’s most iconic superheroes, as well.

Marvel’s Spider-Man oozes with excitement and incredible playability. While the various item collecting, side missions/activities and main narrative all together may not exceed passed the 25-30 hour mark, the sheer enjoyment from swing through the streets and fighting Manhattan’s most notorious super villains is worth the full price alone. The combat when suited-up as the web-swinging hero takes some familiar mechanics and ups the ante significantly, while the sheer velocity of swinging between buildings is nothing short of therapeutic. All in all, I think it’s safe to say the torch has been passed for the best superhero – and, quite possibly one of the best action-adventure – games the industry has ever experienced.