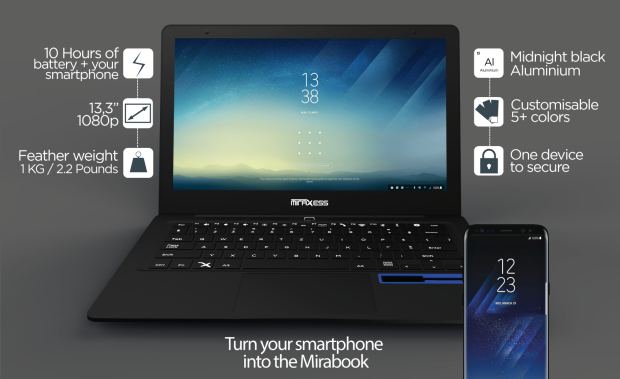 The Mirabook device allows users to turn their smartphone into a laptop whenever they desire. It provides the full experience of using a laptop from a mobile phone. It’s also considerably cheaper than buying a fully fledged laptop or notebook.

Miraxess is the French company behind this new revolutionary device. They’re offering a “mobile convergence” product which works with a range of different smartphones and PC platforms. These platforms combine with the 13-inch notebook to create a working laptop. Here are some of the platforms and operating systems that the device supports:

Mirabook comes in six different colours and is ultra-lightweight at only 1KG. It offers a full 1080p resolution on its 13 inch screen while the battery allows for up to 24 hours of use while also recharging a connected smartphone. The body of the Mirabook also features a single Type A USB slot and an audiojack for headphones.

Mobile devices can be attached to the Mirabook using a USB-C port. Once connected, the Mirabook immediately shows the display screen of the mobile phone.

According to the IndieGoGo campaign, the Mirabook is compatible with Android, Windows Phone and Ubuntu. However, there seems to be no mention of Apple’s iOS platform. The product currently works with a handful of different Android and Windows Phone devices. Once the campaign reaches $100,000 donations the team can implement a Universal Cable which will work with a wide range of phones. This includes phones such as : Google’s Pixel, Samsung, BlackBerry, Sony and Nokia.

You can check out the IndieGoGo campaign here. There’s also a video review of the device below.