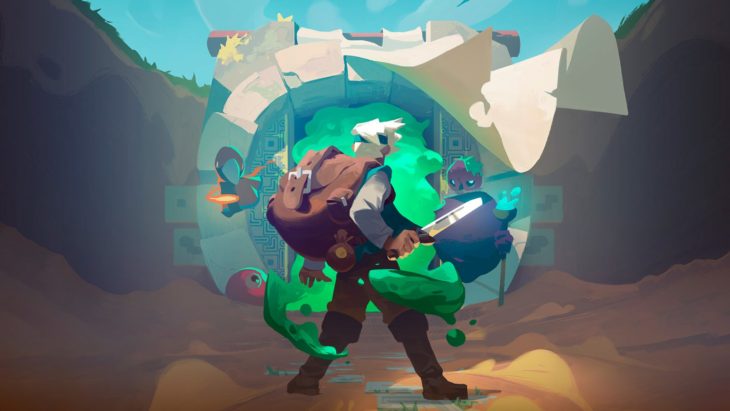 Dungeon crawling has always been a keepsake from where retro style adventure games originally came from, and one that demands creativity and exciting new ideas to stay fresh in today’s modern era. Moonlighter sticks players in the shoes of a determined shop owner who gathers his collective stock of rare items within some of these perilous dungeons, only to turn around a hefty profit from would-be travelers looking to make a quick purchase of the hottest items on the market.

Moonlighter expertly combines the strategically inducing methods of running your very own adventure’s shop with the bold exploration of discovering what lies in dangerous, randomly generated dungeons. As the last owner of a generation of the shop know itself as Moonlighter, the protagonist, Will, is all too determined to find his way to the fifth dungeon door. But first, he must clear out the initial four dungeons of golems, forest creatures and other menacing foes.

Trying Not to Run Your Business Into the Ground

The tactics of Moonlighter are perfectly balanced between exploration and combat – mostly during the night – with the ability to properly sell your findings during the day. Unloading the many resources you come across throughout the dungeons is the fastest and most efficient method of earning loads of currency which may then be used to upgrade Will’s armor, weapons or even invest in adding on to the shop itself. Every sale keeps players thinking strategically about the next, continuously making players think about the asking price from one item to the next.

Within the small village players may also invest their coin purse into bringing in other shop owners to help make Will’s life easier. A weapon smith can be brought in to upgrade armor and weapons, a witch’s shop will provide useful potions and weapon/armor enchantments, or even adding another item shop different from your own can save a few trips to the dungeons in hopes of finding that last piece of material needed for enhancing your weapon. There’s loads of strategy found in Moonlighter both on and off the combat field, and the game is incredibly addictive one way or the other.

Running the shop during the day is excitingly simple and appropriately energetic throughout the course of the daytime hours. While these hours are represented as only a mere couple of minutes, players will find themselves shuffling back and forth from finalizing sales at the register to keeping their shelves fully stocked with the best prices. Players will need to pay close attention to each sale as customers expressions signify whether the price of each item is too high, too low, or just right.

Adding even more to the shop owning simulation experience is the shifting need from one item to the next from day-to-day, as almost every item carries its own high or low stock value. Knowing which item to sell at the highest profit on specific days is key in coming away with the most beneficial method of unloading your precious goods. Also, stocking and displaying more valuable items may also attract unsavory characters looking to swiftly nab their way to a five-finger discount. Catching these shady thieves in the act is an important feature to ensure you’re not losing any hard-earned merchandise to thievery.

Venturing Into the Depths for Profit

Of course, when Will isn’t banking from his incredibly busy shop you’ll be exploring the unknown depths of the dungeon doors found just outside of town. Each floor of the dungeon is procedural but finding new items is relatively simple. Monsters frequently drop precious loot which can either be used for crafting for your own journey, or displayed and sold at your Moonlighter shop. Aside from gathering material from monsters, players may also come across chests containing loot and hidden areas riddled with a unique items and enemy encounters.

Often players will stumble across these treasure filled chests in hopes of filling their limited pocket and backpack space with only the most precious of resources. To make things even more strategy based are specific items that require certain placements within Will’s inventory. Some items may only be placed in certain spots of the inventory menu, while some may destroy any item that placed next to it. It’s a unique take on inventory management that will constantly have players second guessing their every move when scavenging for new items to sell at their shop.

After a few floor’s of exploring through the dungeon, players will eventually come to the inevitable boss area. Upon defeating the dungeon’s boss, the next dungeon will become available allowing Will to narrow in on the coveted fifth and final dungeon door. Most players won’t be able to find their way to the boss level very quickly, so escaping unscathed with a filled inventory is key to returning the next night better prepared than the last. Upon death, players will lose all gathered items from their current trek in the dungeons, so the useful warping stone opens up an escape door wherever you might be within the dungeon, allowing Will to leave the dungeon with all of the gathered loot. The warping doors cost a bit of money, so it’s all-too crucial to ensure you have a little money saved up for an often necessary escape route.

The cut and dry method of running a shop during the day, and fighting off monsters in the dungeons at night – you may actually explore dungeons during the day, but will discover much less rewarding items than you would at night – is actually quite addictive. The shop owning simulation alone makes for a satisfying experimenting phase that will consistently push players towards making the most profit in a hard days work. But throwing in the simple Zelda-like dungeon crawling exploration makes Moonlighter even more exciting and versatile; and it’s much better for it.

Mixing two extremely rewarding and addictively methodical tactics of both combat and bartering simulation is a crafty idea and works exceptionally well in Moonlighter. Finding yourself in the midst of a stellar day in terms of sales will only leave you wanting to explore the dungeons more in hopes of finding that next big-ticket item to sell in your shop. Adding in equipment upgrades, town investments and increasing the size and other various elements within your shop is enough to keep players properly glued to Moonlighter in hopes of finally persevering to the fifth and final dungeon.