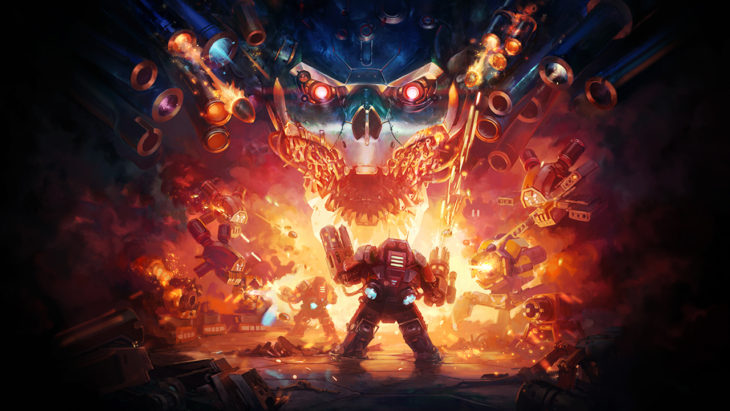 Did We Mention There Were Guns?

Fast mayhem, big guns and cut-throat gameplay is found around every corner in the rogue-lite FPS title, Mothergunship. Stopping the AI fleet that’s taken over Earth isn’t as easy as it seems in this hectically chaotic shooter; but if you happen to find the right combination of weapon parts, you just might have a chance.

Recruited to help eliminate the massive robotic fleet sent to take over Earth, players will blast their way through countless randomly generated rooms, collecting powerful weapon parts and blowing alien ships to pieces. In this unique rogue-lite title you’ll spend much of your time tinkering with a variety of gun customizations that provide a wide range of impressively robust weaponry used to wipe out tons of AI enemies.

Throughout the campaign you’ll quickly make your way from one room to the next with a sole mission objective, like retrieving a special item or triggering the enemy ship’s self-destruct sequence. Each room is randomly generated with a wave of various robotic enemies aggressively countering your every move. However, Mothergunship shines by allowing players the ability to craft, customize and equip up to two weapons with a wide selection of extremely satisfying weapon parts.

You Need Parts For Your Guns

Divided into three sections, players will collect different types of weapon parts from connectors, barrels and special mods. Each part plays a specific role when crafting a new weapon, e.g. the connector allows multiple barrels and special mods to be attached to one weapon. The parts have to follow certain requirements, such as parts must not interfere with one another and must be facing forward which makes crafting a bit more strategic as opposed to simply throwing together the best parts in your collection.

It’s tremendously amusing to throw together absurd concoctions making for some incredibly tumultuous, dual-wielding chaos. Want a ricocheting rocket launcher in one hand and a whirling saw-blade projector in the other? Mothergunship allows recipes for exactly those reasons, and becomes more exciting to see what mixtures you can come up with rather than blasting through the hordes of enemies.

While your pounding through the many incoming AI-filled rooms you’ll also stumble across various market areas which you can find new parts using collected currency and gun-creating workshops. Finishing off a mission successfully will send all of your gathered parts back to your home base of operations, which allows you to then add them to your limited inventory when embarking on another mission. You may also visit the armory when back at your base and feel free to run test runs trying out the enormous amount of weapon part combinations.

Heavy FPS Action With A Dash Of Rogue-Lite

However, being a rogue-lite, once upon death during a mission you’ll lose all acquired parts and fail the mission. You do still gain all experience points earned in battle, helping players level up so you always feel as though you’re progressing. With every level up players earn a new skill point which can be added to your armor to increase perks like health capacity, vertical jump height (you’re able to perform aerial triple jumps from the get-go) and movement speed. It’s a simple “wash, rinse, repeat” gameplay style, but with the addition of abstract weapon constructing trial and error.

With every room cleared the next room’s threat level steadily increases. The more enemies slayed equals the more experience points earned, but players may opt to skip rooms and run straight to the next area. This doesn’t help to gain in levels, but can be a useful method of survival when low on health and close to the end of a mission. It won’t always benefit as many missions end with dangerous boss encounters, but every mission, failed or otherwise, becomes a learning experience.

Along with the standard room inviting players to the next area are also special rooms. Holographic dice covering the next area’s door signifies randomly generated hazards which could mean easier enemies, or perhaps an overwhelming horde of AI. Other rooms offer unique mini challenges, such as no left-handed weapon use or simply staying alive for a limited amount of time. Completing these bonus rooms offer greater experience and rewards during your main mission objective.

The campaign assigns players with gradually harder missions, but players may also choose to embark on side quests to help increase their strength and perks, or weapon part count. And while it may always seem wise to dual equip two weapons at once, the incredibly strong melee attack isn’t necessarily a bad option, especially if you’re lacking on substantially powerful weapon combinations. There’s plenty of options to get you through each and every mission, it just might take a while to find the right weapons for the job.

Taking a step away from the traditional FPS campaigns, Mothergunship provides a non-stop repetition of staggering enemy waves and exhilarating weapon combos. While the gameplay itself may be outweighed by the excellent variety of weapon crafting and customizing options, the quickly paced action fits perfectly with the wacky ally characters and intense FPS combat.

Mothergunship allows players to take insane gun parts and create the most daunting and eye-popping weaponry found in most shooters. While each room can become decently repetitive, there are well-placed obstacles and jump pads to keep the game from becoming too predictable. With subtle hints of rogue-lite elements and gratifying weapon combinations, Mothergunship is a sweet chaotic shooter in a nonstop ride of pandemonium.