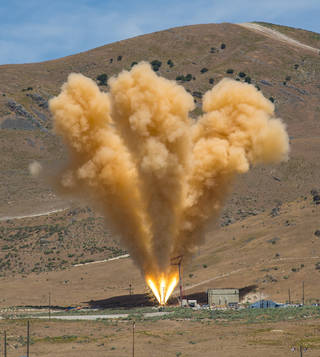 NASA first confirmed their plans for the first SLS Orion mission in February. However, the team decided to go ahead without a crew. If you missed our article on this and would like to know more then you can find it here. NASA has now been performing several safety tests for the spacecraft. Here’s everything we know about them.

A new blog post from NASA details their current tests and plans for the Orion spacecraft. It states that their engineers have been performing various tests in the Utah desert, the skies of Arizona and the water at the Johnson Space Center. The aim of these tests is to ensure the safety of Orion during all stages of it’s launch and re-entry to Earth.

The first test for Orion has been ensuring the Abort Motor is working correctly. The test was done on June 15th where the 17-foot tall motor was fired for five seconds at a time. This module will be playing a crucial role in protecting crews on future missions so ensure it works is paramount. Engineers are still analyzing the data they collected but it looks as though the motor can fire within milliseconds and will work under high temperatures.

Another test for the Orion was the Parachute check. On June 14th the team dropped a mock Orion craft out of an airplane to test how it fares when only the three main parachutes deploy. It certainly looks positive so far but there’s still data to analyse.

The final test was for the airbags that launch during splashdown. The team is currently performing eight different tests on the airbag during different inflation situations which the hope that they’ll match computer models.

NASA is certainly making good headway with their testing for the Orion spacecraft however, they still have some way to go.