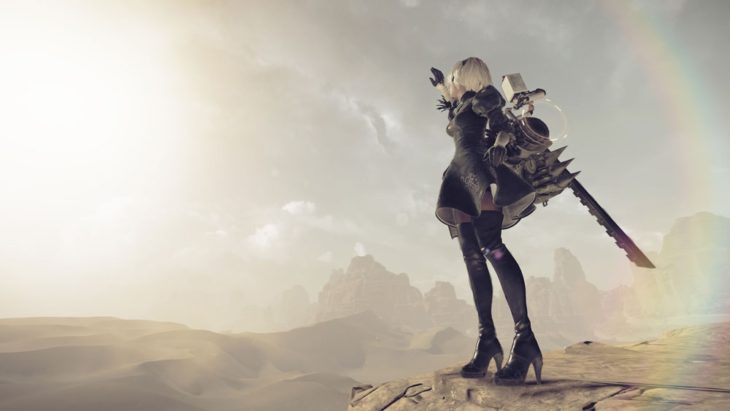 Platinum Games have pushed out many exciting action titles to date, such as titles like Bayonetta and Metal Gear Rising: Revengeance. With their latest adventure RPG title, Nier: Automata, they take a blend of various arcade/action gaming styles and combines them into one fluid, futuristic RPG experience.

In the far distant future -11945 A.D. to be exact – Earth has been overrun by another species of machines from distant worlds and the final push to reclaim Earth is closing in. Taking control of the android 2B, you’ll tread through an expansive open world full of postapocalyptic visuals and enemies.

Opening the game you’ll be thrown rather abruptly into an infiltration mission full of quick combat manuevers, showcasing the game’s exciting gameplay mechanics. Switching camera angles from third person action slasher to side view platformer, then to top view arcade shooter, the game keeps the player heavily engaged throughout the duration of the campaign.

The open world in Automata is expansive and completely flooded with foliage and sprouting wildlife right through rundown cityscapes. Locations from vast, golden deserts to abandoned warehouses, green and lush landscapes with a rebel shelter planted in the middle, every area feels unique to the world surrounding 2B.

With different weapon variations you’re able to customize the way you take on enemies and machines. Having different weapons assigned to each attack slot – either normal or heavy attacks – you’re able to use multiple weapons and various playstyles to take on the unique machines found throughout the land of Nier. The pod which follows 2B around also provides range attacks, starting off with the quintessential laser cannon to defensive shield capabilities or bomb dropping attacks, the pod proves a valuable and strategic asset at 2Bs disposal.

A futuristic Earth taken over by ravenous machines seems to becoming a tiresome plot in gaming. Luckily, skilled developers are clever enough to disguise over-used postapocalyptic themes with top-notch gameplay, unique sandbox style maps, tons of quests and challenges, and an enduring story to save what’s left of humanity in one of the year’s best titles yet, Nier: Automata.