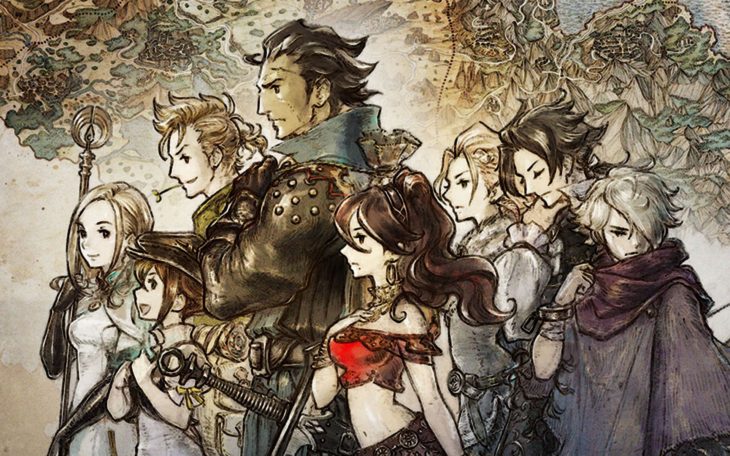 Octopath Traveler harnesses the retro days of 8/16 bit JRPGs that Square Studios have long been known for. It’s a tremendously refreshing experience in today’s continued onslaught of massive open-world adventures where players can dive back into a vintage style of pixelated visuals with a striking new twist. Presented in clean, awe-inspiring visuals that the developers coined “HD-2D”, but also offers up exciting new mechanics to exploration, character skills/abilities and combat. In a time flooded by open-world third-person RPGs, does Octopath Traveler resonate down its own course; or fall behind utilizing a vintage formula with a few new tweaks to the recipe?

Check out our video summary review of Octopath Traveler below:

Octopath Traveler has players taking on the role of one of eight main characters who is locked into their party permanently. While the game is heavily inspired by traditional turn-based RPGs with a four-person party during combat, the chosen character may not be removed from the party throughout the duration of the campaign. However, players will have the option of recruiting all other seven allies and go through their personal stories in any order and fashion – and may swap out these characters to put together the best party for your play style.

A World Set In HD-2D

The world of Octopath Traveler is large and vibrant taking players through many different biomes and settings as the HD-2D visuals take hold of the art style. Each separate traveler hails from a different part of the over-world and it’s up to the player to travel and recruit each character. Each area you travel through is set up for a specific player level, so it’s easy to determine whether or not you’re strong enough to survive – or if you should turn back immediately. Regardless, the first chapter of the game centers around meeting each of the eight main characters and their stories that take them on their memorable journey.

The game follows a relatively linear passage between each area, but does offer many branching pathways that typically lead to either treasure chests filled with items or optional dungeons for further enhancing your experience level. Players will engage in wild encounters throughout their journey similar to other relatable old-school RPGs, inviting players into an absolutely riveting battle system. Spending your adventure exploring the many diverse sections that make up the Octopath Traveler map will most definitely invoke a nostalgic feeling, but also an exciting sense of adventure. Through yellowing deserts, green and rich forests, snow-capped mountain tops and a plethora of populated areas like small villages and robust cities, there’s plenty to see within the vibrant world.

Once all characters have been recruited (or, at least as many as you’d like to recruit) players can move on to the next chapter of each character. Each individual story presents a different type of personal battle the character may be fighting, but each character also comes with their own unique fighting style and personality. What’s odd, however, is that there are only select bits in the adventure where the group of travelers interact with one another, making the group effort a bit awkward and often lacks any real depth of friendship between the heroes. Nevertheless, the adventure of all eight characters, though mostly cliché, is enough to keep pushing players through until the end with inspiring moments of conversation and lore.

As the characters level up when included in the player’s party, they’ll also learn new skills for battle, as well as new passive abilities to take advantage of. These particular skills can help alleviate finding certain enemy weaknesses at the start of battle, allow for less random battle encounters for more fluid exploration or even regaining lost HP after every turn in battle. There’s plenty of skills to learn once digging deeper into Octopath Traveler which opens up the game as a much more engaging RPG experience that tends to keep the enduring journey from stalling out early on in the game.

A Combat System Filled With Excitement

While the exploration and characters create a unique experience all on its own in Octopath Traveler, the battle system is one of the big “it” factors of the game. Adopting the classic turn-based battle mechanics found in other popular titles in the RPG genre, there are a few elements that separates Octopath Traveler’s combat from others. From the different weapon types, magic and abilities – the battle system featured in the game offers up plenty of strategy for all types of players. And possibly one of the most important aspects of battle is pinning down your enemy’s weak point which can lead to devastating attacks in the heat of battle.

While weaker enemies won’t always challenge the player, plenty of combat situations in Octopath Traveler can and will present lengthy battles and dire moments. Each battle will typically have players searching and testing out new strategies in order to discover an enemy’s various weaknesses. Striking an enemy weakness will lower their shield counter which is represented by a number next to each enemy. Every enemy type has different weaknesses and a different shield number, allowing the game’s many wild combat engagements to feel just as fresh as the one before; but also creates an exciting experience as you try to pin-point every weakness. Once the shield counter has hit zero, the enemy’s defense is then lowered significantly and are also stunned which takes them out of the next turn.

And in order to unload on enemy parties as effectively as possible, Octopath Traveler has players earning Boost Points at the end of every turn. Boost points may be collected with each character in the party allowing up to five points to be held at a time, but using these points at crucial moments in battle will leave a satisfying impressions time and time again. Players will use a boost point before selecting an attack which then adds an increased effect of the selected ability or has the player attack multiple times in a row depending on the ability used. And to really take advantage of the boost point system, players may use up to three points at a time which can really add insult to injury.

The deep combat mechanics consisting of Boost Points, enemy weaknesses and a variety of weapon types keeps the game from growing stale during those high points of grinding. And perhaps the one tedious part of Octopath Traveler is the incredible amount of experience point grinding found between each chapter. However, due to the many areas to explore and incredibly satisfying battle mechanics mentioned above, the game doesn’t lose its edge of excitement during these tedious workouts. The battle system keeps the players one their toes and properly tasks players with experimenting with different weapon and elemental types in order to discover all weaknesses for enemies, because the more weaknesses unlocked – the quicker you can overcome the many challenges presented in nearly each and every battle.

But what really expands the combat system for each character is the coveted Jobs system. Characters will eventually unlock the ability to take on different jobs or classes which can benefit the player as they see fit. Swapping one character for a different job can allow the player create a party based on their desired skills and weapons, fully opening up the battles to let the characters deal tons of damage and allowing every character in a party to exploit enemy weaknesses.

The jobs system is something taken from older RPG titles, especially earlier Final Fantasy titles. Creating a party based around specific classes and weapon types forgoes any unnecessary options for particular characters skills, but allows players to tackle enemies based one what suits their play style best. Or they can be used when taking on more difficult areas of the game or bosses, suiting your party up to deal specific weapon or element damage directly corresponding with the weakness of particular enemies. With an already innovative combat system, adding the Jobs system into the mix takes Octopath Traveler one more step forward in a game that’s filled with exciting features and a deep battle system.

One last feature in Octopath Traveler is the unique side-questing system. Every village and some areas contain NPC that will tasks players with various side quests. After undertaking these side quests, players will have the option of utilizing key abilities when engaging with specific quest or quest related NPC. Some NPC may need to be fought in battle, others may need to be lead to certain areas, while others may need to be pick-pocketed. Each of the eight characters each have their own unique ability when interacting with NPC, and it takes strong awareness to uncover which ability needs to be used in a specific situation.

What Octopath Traveler brings to the table is a vivid retro-inspired JRPG experience between a colorful cast of characters. While often the eight different parallel stories rarely interweave with one another or the characters involved, they do provide different tastes in narratives throughout an extensive amount of playtime. Though many players may find themselves hitting the old grind time and time again in order to keep pace with enemy power levels, the excellent combat system does an outstanding job of keeping players thoroughly engaged with incredible gameplay.

Anyone looking to jump into a nostalgia inspired endeavor with a glistening coat of paint and riveting gameplay mechanics, Octopath Traveler nails it. Veteran RPG players should catch on to the system relatively quickly, but that doesn’t mean the game will grow stale or satiated. And newcomers to the genre will have plenty of time to adapt to the game’s simple, yet exciting battle system, many characters to swap between and unbelievably gorgeous setting coupled with a simply stunning art style I can only hope reappears time and time again.