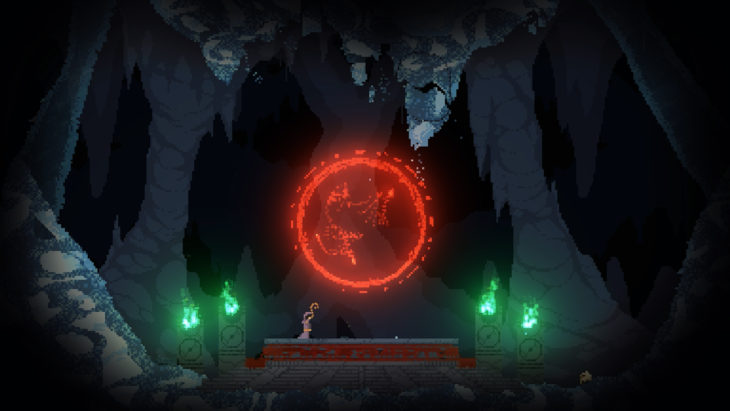 Finnish game developers Nolla Games has officially announced their upcoming rogue-lite title, Noita. Coming to PC in pixellated wonder, the small development team still has a load of work ahead of them, but are confident to reveal a few minor details on their next gaming project with an all-new reveal trailer.

With an uncertainty looming in the air, the Finnish development team is working endlessly on an action title still early in the making while keeping an option to abort in the future, if necessary. Not to downplay the excitement for this new pixel game, Noita looks to expand into the world of imaginative indie titles and bring players an experience where every pixel is physically simulated.

With procedurally generated worlds and loads of actions to run you through the game, each time you enter Noita new discoveries await around every corner. You can burn and melt areas and objects to oblivion, freeze your way out of a mess or evaporate the threat that stands in your way, nothing is impossible once you explore the magical world of Noita.

Dying, like in most games, poses an obvious threat, sending your player back to the beginning. Thought of less as punishment and more as a lesson learned, the creators wanted to give gamers a chance to fix their wrong doings and try it again from the top. Every adventure, secret, skill and death is a learning opportunity to advance you further and further the more you play the game.

Destroying your enemies and manipulating the world that surrounds you to your liking with the skills of using your powerful magic and spells, Noita looks to deliver a world full of depth and exploration mixed with unique, rogue-lite gameplay mechanics to add to the adventure. Though no release date has been officially released, and the console market is not a primary focal point for the Nolla Games, PC gamers can hope to catch a release date as soon as the team is able to take development to the next level.