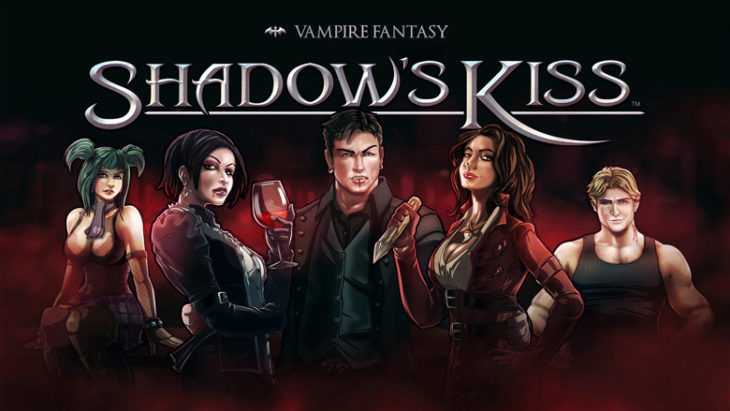 The world of vampires, shape-shifting monster and werewolves has surprisingly been relatively untouched in the Massive Multiplayer Online gaming community. Indie developers from the small team at Clockwork Throne Studios has decided to do something about the lack of supernatural fantasy, and is now set to release the upcoming vampire MMO – Shadow’s Kiss.

Ruling the nights and joining factions based around a fantasy city, adventurers will join jolly co-op set with vampiric themes will set off on epic quests and thrilling online turn based battles. Evolving your character with a loose skill tree, tons of allies and enemy encounters, and a gothic setting full of loot ready to be explored. Check out the Kickstarter page from Clockwork Throne on their latest project, Shadow’s Kiss.

Like traditional MMO’s, Shadow’s Kiss will lead players on online quests, work to develop their character and face off against different, and dangerous, supernatural factions. Rule the night as a Vampire should and loot for power items to increase your player’s skills and abilities.

Play the role you choose to be

With a goal to rule the gothic fantasy city, San Cipriano, players embark on an adventure while either cooperating or competing against other online players. Build yourself through the ranks of the vampire hierarchy and become the ultimate powerful creature of the night. Ruling over factions like local crime syndicates, on the other side of the spectrum in law enforcement, or even the media. Of course, vampires aren’t the only supernatural being featured in Shadow’s Kiss.

Tons of adversaries and allies lay in the wake of Shadow’s Kiss, and it’s up to you to decide where they fall. Shapeshifters known as Loupgarou from the Lunar Covenant, Necromancers bring the dead back to life, Loa Masters who defeat the city with nightmares and various demons summoned by various cultists. Befriend the Necromancers and gain knowledge for their stolen Nicola Tesla technology to force the dead to rise, or fend off against terrorizing cultist factions, the world is full of surprises.

Plenty of enemies await in Shadow’s Kiss, but allies, thralls and spies are also found through discovery and rewards from quests. These helpful residents and allies will help tell your story, and increase your ever-growing rise to power. Throughout the game players will build upon their Cast of Characters, or Rogue’s Gallery, and become a stronger, more skilled ruler of the night.

Creating your personal avatar to explore the gothic lands, player’s will have the options of gender, orientation and a unique story motivation to help distinguish your character. From a helpful Fallen Angel, to the destructive Diabolic Monster, and everything in between players are free to choose their path of diplomacy.

With a clean break from the class system found in most other RPGs, Shadow’s Kiss let’s players become and evolve into whichever form meets specific criteria. Not limited by class systems and particular skillsets, players can learn abilities and level their skill tree based upon their team and other assets.

Forming allies and other companion groups will help lead players through the campaign story quests. As you progress through the main narrative, your Rogue’s Gallery will begin to grow in size. Traversing the gothic map and completing various quests will push the main story forward, starting from the introduction of Vampire King Logan. Starting the game’s story, you’ll be instructed to investigate a treacherous queen by the name of Daley. With further exploration of the game you’ll no doubt encounter tons of other side quests, in turn stretching the path you choose to take in a variety of different directions.

As your character develops and begins to form which side of the personality spectrum they adhere to, new species, like thralls and blood familiars will become substantial in various quests. Plenty of quests will leave you in need of thralls, or drained mortals turned vampire, spies or other useful companions. By feeding on mortals – which is a big part of survival in Shadow’s Kiss – thralls are formed, further increasing your Cast of Characters. But tons of enemies will lay in your path to try to defeat you or your faction.

The combat found in Shadow’s Kiss takes a turn-based strategy to push the important features of combat to the front of online battles. Techniques like stealth, summoning allies, setting traps, teaming up with deadly slayers, or other ways to intimidate your foes are all viable options. Trading in traditional melee combat found in other MMO RPG’s for a more strategic approach lays a lot of planning and risk to overcome dangerous obstacles.

Also found in the intriguing combat system are tons of powers and abilities to lay down upon your foes. Useful skills will have your vampire, or some other supernatural being, feeling like a true power of force. Lightning quick speed, or incredible strength to snap lower level enemies in half. The powerful abilities across the power tree may be obtained through exploration and becoming more skillful, enhancing the way you play through Shadow’s Kiss.

Check out the Kickstarter page!

The game has been in development now for over 2 years and is ready to take the next step in production. Clockwork Throne is eager to finally create a MMO that’s theme is missing from the online market. While the game has passed its initial pledge goal, there are still loads of content worthy of being added to the final release. With tons of additional rewards, quests, more characters like werewolves, Adepts like magicians, Shamans and Revenants, and tons of other hidden surprises not yet revealed by the team.

Check out more on Shadow’s Kiss on the developing team’s Kickstarter page and put in your pledge today if the grim and gothic world of the night sounds like a world you’d like to explore in MMO fashion. Set for release on PC on December 2018, there’s still plenty of time to make your pledge, run through the rewards and the chance to hop into the early access beta of Shadow’s Kiss.