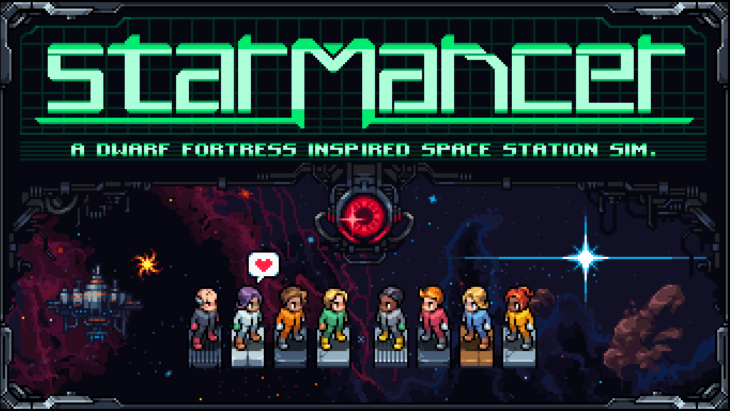 Quite the Start to Starmancer’s Kickstarter Campaign

Ever wonder what it’d be like to run your own space station with its own occupants? How about what it’s like to have your mind infused with the AI that runs said space station? Well, thanks to Ominux Games‘ immediate success with their Kickstarter campaign, the space station sim title that allows you to do just that – Starmancer – is headed for its official release, hopefully sometime next year.

Starmancer – “A human who has irreversibly fused their brain and body into a machine.” The definition by Ominux Games about the main “character” set in their upcoming space sim title. You will take on the role of a human brain meshed with an artificial intelligence in charge of efficiently operating a damaged space station known as an Ark. You’ll repair, build, fend off against space raiders and assign duties to your personalized crew, all in order to pave your path to the future.

Upon leaving the irreversibly doomed Earth, time constraints prohibited safe evacuation for humanity, only loading in their consciousness into the Starmancer core. The Starmancer Initiation program consists of volunteers – such as yourself – to fuse their functioning brain with AI in charge running the Ark space stations that will ensure life outside of the crumbling planet Earth. It’s up to you how everything plays out, and the crucial decisions that will come into play throughout your Starmancer experience.

As any other simulation experience, players will be in control of running their entire Starmancer space station – from providing the necessary survival equipment, building and constructing everything like the paint on the walls to creating a fully equipped sterilized space station, to ensuring your residents are happy, healthy and working efficiently. Of course, the options are open as to how you wish to run the space station, as well. Maybe a happy-go-lucky approach isn’t exactly what you had in mind. Turning against your crew, or going Rogue, will have its consequences, so players must be prepared for an uprising.

Related: Preview of Kickstarter Title – Vulpine: Be A Fox With A Sword

The morale system in Starmancer allows their crew to adapt and expand their actions as they develop. Keeping morale high is important for pursuing a properly functioning Ark, but that seems to be easier said than done. If morale sinks too low for too long crew members may begin to question your ways, congregate with one another and plan a strike to take down your core. The importance of keeping a happy and fluid work crew seems all too vital in this space sim experience.

Of course, amidst the vast depths of space your Ark is not the only one still functioning. Other faction Arks are littered throughout the unknown galaxy with their own governing system and ways. All factions have their own friends and enemies list, which makes trading for services and completing missions for factions a bit of a gamble. Growing your relationship with one factions may be a positive moving point at first, but eventually their enemies will target you as well. These enemy factions will not only ban your Ark from doing business with them, but if a serious hatred develops towards your faction, they’re likely to send out their own execution squads to eliminate your core.

You’re Not Alone in the Depths of the Galaxy

Taking on missions, trading any of your precious resources, or mining nearby asteroids are some of the various tasks that may befall the Starmancer. With the differing factions that populate space, players will need to discover their surroundings in order to safely explore the stars. Certain factions will follow proper diplomacy guidelines, initiating trades and providing work to better your bond with one another. While other, more rebellious factions may simply try to take what they want with brute force. Just a few factors that lead into which role you wish to develop.

Aside from territorial factions planning on making their move towards your removal from the galaxy, space pirates are also a looming threat. Operating outside of the governing factions, these pirates lurk for weakened stations hoping to fill up on resources. While gathering important materials and resources is crucial for your survival on the Ark, pirates will become aware of your success and eventually come to clean out your colony. Defensive measures, such as armored walls and powerful turrets may be placed to help fend off these looming threats.

Deadly threats won’t only come in space pirate form, as lack of basic necessities is just as important as providing defensive measures. Food, oxygen and water are the most vital needs that your colonists will consume, but other aspects play a role in survival as well. Interacting with outsiders and going out on missions to unknown territories can lead to contracted diseases, which would then require the station to have a quarantine zone. The world of Starmancer is a living and breathing universe, each randomly generated with every new game you start. Keeping, not only the station running efficiently, but your colonists alive and safe from all of the dangers that seep in from space will be no easy task.

The colonists in Starmancer aren’t simply clones walking about doing your bidding. Each one has a unique personality and back story to help the player grow a bit more attached. When colonists perish it’s meant to have a lasting effect on the player, as they continued to grow their bond with each and every colonist. Along with the unique back story and personality, each crew member will also has specific attributes which directly affect their jobs around the colony.

Colonists will also have the ability to enter relationships, spread rumors, as well as develop class systems, such as lower and upper class citizens. Popular and likeable colonists will be dearly missed if dealt with in an unruly manner, which could lead the rest of the colony to start a mutiny; while unhappy colonists could unknowingly start a negative rumor if discussed with the wrong colonists. Keeping a watchful eye over your Ark and its inhabitants is an important feature in Starmancer, and the interactions between your colonists will prove just as tenacious.

Through just over a week Ominux Games’ Kickstarter campaign for their currently in development space sim – Starmancer – has nearly doubled their initial goal. If the pledges keep coming in, the developers are set to add more details and content to the game, like Creative Mode – which would allow players to construct without limitations, or adding Robots to the factions, robotics lab and populace. The way things have been going for the campaign, these additions are not completely out of the picture.

If creating your very own space station, stabilizing your colony, sending your crew to explore the vastness of space, fending off against space pirates and rebel factions, and guiding your Ark into the future, Starmancer looks to satisfy all of these needs, and more. The intuitive and deep strategy that exists in this space station simulation title looks like an exciting endeavor, so head on over to Ominux Games’ Kickstarter page and check out their pledge guidelines.