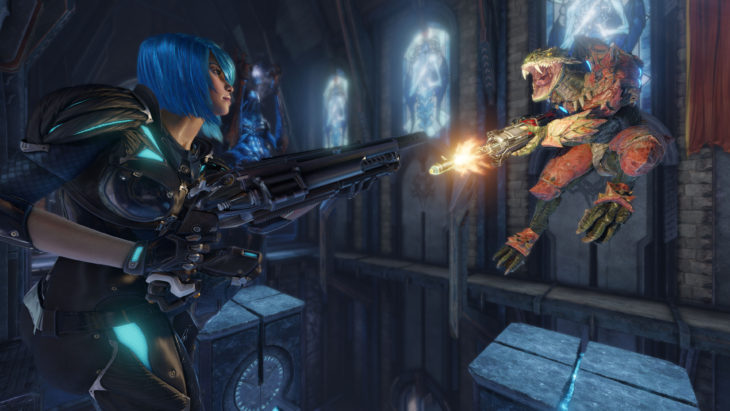 Teaming up for one packed partnership, Bethesda Softworks have combined forces with the Collegiate Starleague and are preparing a brand new Quake Champions Competition, offering school scholarships, a cash prize and a chance to compete in QuakeCon 2018.

By joining forces, the Quake competition is able to help college students with scholarship programs and a split of a cash prize of $100,000. The competition will be split between two of the main game modes, Duel and Sacrifice. Duel is the traditional deathmatch in online PvP games, pitting one-on-one matches. While Sacrifice groups players into teams of four, and two teams duke it out for victory.

CSL will start a smaller tournament for college Sacrifice players to help prepare their teams for the main competition, which is set to start in February 2018. After the Sacrifice rounds, winning players will be rewarded with the appropriate share of scholarship funds. Starting in June, the Duel competitions will start and run until the end of July, earning the winners not only scholarship funds, but the top 8 winners will qualify for the QuakeCon finals next year.

Quake Champions is looking to broaden its fanbase and Bethesda is well on their way to help bring new light to the massively popular online gaming title, that has seen lackluster viewer numbers in previous championships. Another point this topic is bringing to light, is the constant involvement college students have with competing eSports games and competitions. This way, Bethesda and CSL have figured out a way to help struggling, Quake dedicated college students, climb through the inevitable hole of college loans and debt.

Though Quake is steadily sliding away from popularity in eSports, Bethesda is doing their best to bring back what was once the largest growing competitive video game in recent years. Offering college scholarships in partnership with CSL is definitely a step in the right direction.