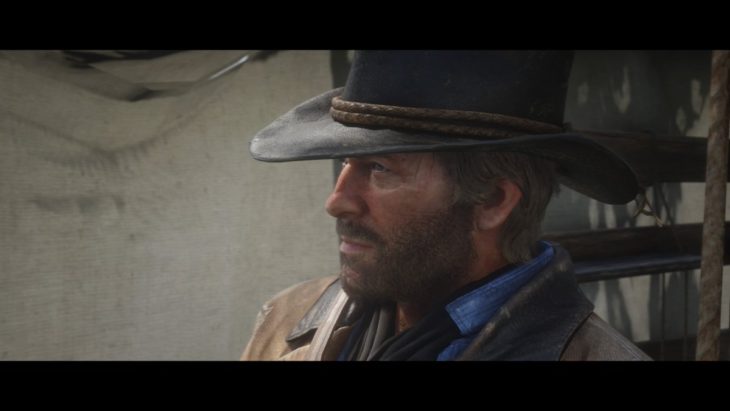 Every so often, a game comes around that completely immerses you in a breathtaking way that sets itself apart from most other experiences. It takes fine attention to detail, superb storytelling and writing, a purely atmospheric score and a world basking with a completely organic feel to achieve such a stunningly authentic experience. Rockstar may have drifted away from their typical run-n-gun formula that helped put them on the map with their latest release. But the bold move taken by Red Dead Redemption II will help evolve open world gaming into something more than the overly monotonous and rather dull experiences often found in the genre today.

Check out our video review of Red Dead Redemption II below:

The world of Red Dead 2 completely comes alive within moments of firing up the single player campaign. Taking the lead as Arthur Morgan, players will immediately feel the tension of surviving while on the run as an outlawed western gang. The world is growing and becoming more civilized, yet the Van der Linde Gang remains one of the last cowboy-esque family of gangs to roam the vast western American region. Drama fills the air as Arthur and Co. look to take their close-knit gang out of the cold and snowy wilds, and find a proper shelter to collect themselves after being stuck in the frozen confines of the arctic mountain, snow-piled passageway.

Once out of the dilemma the gang finds themselves in at the start of the game, the world of Red Dead II comes alive. The massive land spreading through five different states each with their own biome is nothing short of breathtaking. The world lives with or without the player engaging them, allowing each and every NPC or wild animal the freedom to live out their life. Deciding whether or not to interfere with various elements within the world is all part of the experience. And it’s many of these actions and choices that help paint the image of the version of Arthur Morgan the player envisions.

Keeping It Slow And Steady

Immediately noticeable is the game’s considerably slower pace when compared to other Rockstar giants. Arthur walks through his camp, looting bodies comes one at a time with an almost painfully slow animation (that goes for skinning animals, as well) and the mandatory survival aspects of the game forbid the game from picking up to a more accustomed pace. However, all of these elements added into the formula of Red Dead Redemption II creates an experience that allows players to fully engross themselves in the much slower wild western era.

Eventually, the Van der Linde family posts up and settles in their traveling, makeshift camp. Everyone has their own responsibilities within the Van der Linde circle, including Arthur. Bringing in animal meat, skins and other usable parts raise the camp’s food supply. Donating personal funds into the camp funds supply allows the player to upgrade various elements of the campsite. Stocking up on medical supplies and ammunition also helps raise specific camp stats. These various supplies run out over time, and it typically falls on Arthur to make sure they’re properly replenished.

Of course, there’s also upsides to properly managing the Van der Linde Gang. Morale will increase among gang members and the player always has a location where they can revitalize various stats on Arthur Morgan, such as his steadily depleting hunger and stamina meters. Though perhaps one of the most tedious aspects of the entire camp management portion of Red Dead II is that Arthur’s horse may only carry one big carcass at a time. This makes hunting for multiple big kills extremely meticulous and may drive off more than a few impatient players.

When players aren’t busy keeping their camp happy with various tasks and chores, players will also need to pay close attention to their number one companion in the game – Arthur’s horse. While players are able to own and stable multiple horses, creating a bond between Arthur and the horse is necessary for creating a more reliable friendship with the quadruped. Keeping your horse properly fed and clean, hitching them safely to hitching posts, and making sure you’re not over working them passed their stamina levels all help to create a lasting relationship between Arthur and his horse. Horses won’t buck Arthur off when scared, have a wider whistle range and can even learn new abilities like sliding through turns or rearing on command when the player takes the time to properly build their bonding level with their horse.

Though keeping up with the various management properties in Red Dead II seems like a handful, it becomes an essential part of the experience throughout the game. The realism of the world and realism in the living conditions both provide a fully immersive romp through the era of the wild west. And while these tasks may seem like a hindrance at times, the wide diversity between missions allows players a break from the lifelike simulation events featured within Red Dead II.

A Widely Diverse Selection of Missions

With a properly fed horse and happy settlement, players can comfortably take on one of the many diverging missions that pop up throughout the world of Red Dead II. The main story missions tell the riveting tale of a gang of outlaws surviving within a world quickly moving towards a more civilized society. The wild western era of cowboys and train robbers is rapidly becoming a thing of the past, and no matter how hard they try – the Van der Linde Gang is falling behind.

The story whisks players into the era of galloping horses, single fire weapons and when surviving by any means necessary was much more literal. The slower pace found in many of the earlier missions allows players to soak themselves in the beautifully crafted world of Red Dead II. Learning who the cast of misfits are as Arthur’s closest thing to family invites the player into the lives of those risking it all for the Van der Linde Gang. The many personalities begin to open up the further you dive in with each and every member serving a different role in the gang’s colorful identity wheel. Original Red Dead players will recognize a few faces and names that outline the outlawed Van der Linde Gang, but the story still packs a punch with plenty of unforeseen twists expertly plotting themselves in at major junctions of the story.

The vast array of optional side tasks is no slouch, either. Players can, and will, discover an organic world overflowing with unique events making an appearance all over the map. Stranger missions act as the game’s main side questing system revealing themselves when a certain distance from the player. Here, it is where players will discover some of the game’s most enjoyable, colorful and incredibly diverse cast of characters that help create that unforgettable world. The missions variation is remarkably wide with each mission typically tasking the player with much more than generic “kill this bad guy here, find this item there” fetch quests. Players meet characters from all different backgrounds and will partake in activities like herding wild horses, gun shooting contests and even standard farming chores, like shoveling piles of…let’s say mud.

Aside from Stranger missions, players can also experience the west the outlaw way by playing side activities like poker, dominoes or the excruciating five-finger fillet. Rounding up wanted criminals as a bounty hunter, robbing homesteads clean, stealing stagecoaches, setting up camp, treasure hunting and so much more. It’s a wild and massive world to discover in Red Dead Redemption II, and every time you think you’ve seen it all, something inevitably surprises you.

Once you’ve had your fill of Red Dead’s campaign, players may dip into the online beta mode for a bit of a different experience. While you’ll still be exploring the massive world Rockstar has created, crafting your very own western outlaw makes the game feel a little more personal. Though, currently the online is still in its beta stage leaving little to do in comparison to the single player option, there’s an excellent roadmap planned for a constantly growing experience within the world of Red Dead Online.

With the amount of detail both in the world and the gameplay itself, Red Dead Redemption II isn’t a title for everyone. It’s a beautifully crafted world that demands attention and pushing through the experience as quickly as possible robs the player of fully experiencing the end of the wild western era through a completely engrossing story. It’s a game for the patient player, one who doesn’t mind side tracking often from the main story to allow the game’s world to wrap itself around the player. While Red Dead Redemption II may not hit the same mark of accessibility that Rockstar’s own Grand Theft Auto V hit over five years prior, it excels in nearly every other aspect of game design.

Red Dead Redemption II feels like a true bridge between the current and next generation of open world video games. The impressively dynamic world lives and breathes around Arthur Morgan and manages to tell a purely fascinating narrative both in the main story line, and the world Rockstar so eloquently created. It seems like there’s always something to do or always an event taking place in Red Dead Redemption II, making for a truly remarkable experience not to be missed by any fan of the open world genre.