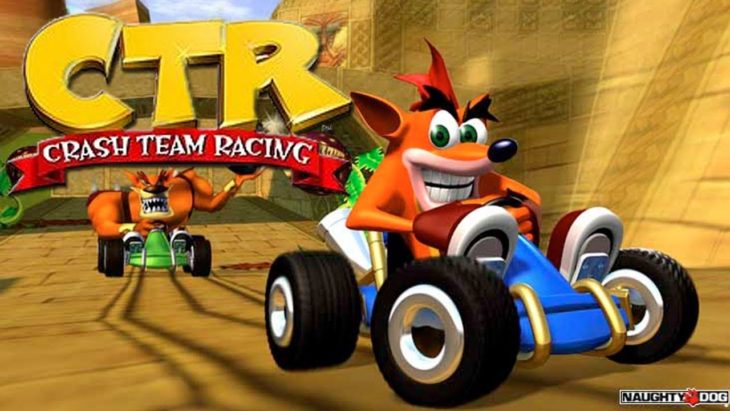 The appearance of extreme kart racing titles like Nintendo exclusives, Diddy Kong Racing and Mario Kart, created a fantastic party-like environment with thrilling racing action. The arcade like play style and beloved characters from the Crash Bandicoot franchise introduced a new way to sink into the racing genre with, Crash Team Racing.

Arcade racers in video games are able to relieve players from the tensions of the simulated, realistic and professionally skilled racers like the Gran Turismos of the Playstation spectrum. Kart racers, like Crash Team Racing, take the arcade stylings one step further and introduce outlandish and loose racing mechanics, and often include game changing power ups, elusive short cuts and a charming selection of boisterous racers.

In CTR, the loveable characters from Sony’s initial iconic franchise – Crash Bandicoot – make up the roster of racers. All with different personalities and attributes, racers like Tiny the dog, Doctor Neo Cortex, Crash and his sister Coco, as well as plenty of other familiar characters from the early releases from the Bandicoot series keep the racing entertaining and highly competitive.

The racing mechanics in this karting classic follow the traditional path of other popular karting styles. With loose and slick steering, the karts still manage to grip onto the track through turns in a relatively easy manner. The slide technique is a popular method to increase playability and a keen way to spark more action into the races. By “hopping” at the start of a corner/turn, continuing to hold the “hop” button down will result in your racer beginning to powerslide. When the boost meter fills to green during your powerslide, press the opposite shoulder button for a quick burst of speed. You may use up to three boosts every time you powerslide, with each boost giving a slightly more increased explosion of speed than the one before.

Many item boxes litter the kart courses, revealing many of the various and helpful power ups during the race. Dangerous items can be left behind in your dust for other racers to smash into, like poison beakers and TNT crates, leaving a heap of traps throughout the race track. Projectile weapons like rockets and rolling bowling-ball bombs can be equipped once obtained through the “?” boxes. Plenty of other useful enhancements are randomly selected, ranging from speed boosts to electric orbs taking out any racers in its path.

Wumpa fruit boxes are also found across the races and act as a bonus for battle items in the question mark boxes. By collecting 10 wumpa fruit, every item you now obtain in races becomes an increased version of whichever weapon or power up you obtain. Standard rockets become heat-seeking, bowling bombs have a larger blast radius, or perhaps the useful shield no longer disappears after a certain period of time. Wumpa fruit can prove just as effective as the item boxes themselves.

Tons of memorable courses battling your way through the herd of loveable and trash-talking Crash characters, a handful of boss battles are also available through the story mode. Ripper Roo, the time master N. Tropy and the mega boss of the entire game – Nitros Oxide. These special boss characters also become unlockable racers later in the game, leaving plenty of replay value in the game.

With a quirky and eccentric characters, thrilling racing levels, a casual approach to the karting genre and excellent arcade action, Crash Team Racing takes its fair share of the karting pie from other popular karting favorites.