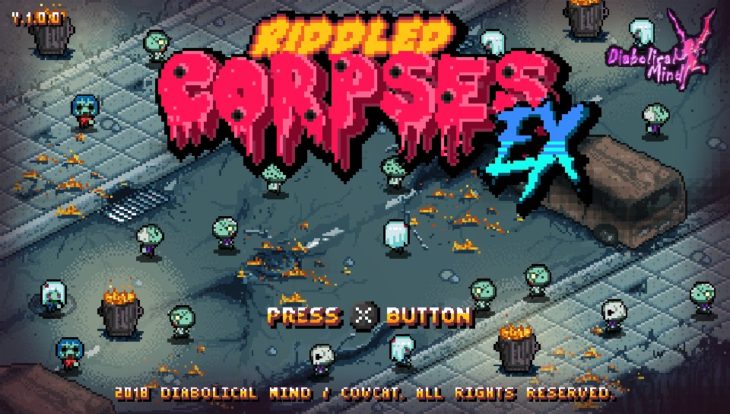 The nostalgic fever that continues to sweep through the indie gaming scene doesn’t always stop itself at retro 8 bit graphics. Diabolical Mind’s latest remaster brings back the addictive twin stick shooting fun of Riddled Corpses and polishes the experience for console owners looking for a return to the vintage arcade days of gaming.

Like most twin stick shooters players will find themselves struggling to survive against what seems like endless waves of agile enemies and piercing projectiles. The gracious flow of constant movement and nimbly squeezing between hazards while eliminating one threat after another is a tried and true test for one’s mental stamina and reflexes. Riddled Corpses EX presents this experience near perfectly reminding gamers what it takes to conquer the addictively brutal monster fest.

New Changes to the Formula

The major changes that come stocked in the remastered EX version of Riddled Corpses is an all-new story mode including cut scenes, gameplay at a whopping 60 FPS, new enemies, 2-player local co-op and relieving the tension of grinding your character through repetitive gold digging. These new features help boost the overall playability and approach to the classic arcade style shooter for the casual crowd, as well as still sticking to what makes the gameplay so challenging for the more hardcore gamer base.

Players returning from the original 2015 PC release will still discover the return of Survival and Arcade modes, but will be surprised to see an all-out story mode filled with cut scenes and a selection of unlockable character each with their own helpful stats. Across the six different stages offered players will also earn valuable gold for leveling up or purchasing health items or power ups before you start each stage.

However, increasing your firearm’s velocity and bullet per shot count takes a bit of a grind, which can be done by repeating previously beaten stages to build up that bank. The remastered EX version helps narrow that grind, though, allowing players less time to get your character(s) where you want them and continue progressing through the stages. This thoughtful attention to detail by the developers is a charming piece of subtle integrity that helps the casual players easily approach the rather difficult Riddled Corpses formula.

As players make their way through each stage waves of zombies and mini bosses will rain in from all side of the screen. As time passes the camera will begin to slowly pan (in most stages, anyway) across the level forcing the player’s character towards the end of the level – which always ends with a massive final boss that fills up the majority of the screen.

Upon defeating each stage, as well as throughout the zombie slaughtering pathway of destruction – players will collect various pieces of gold. The gold acts as an experience point/currency system within the game’s progression, which actually works pretty well. Purchasing new characters with unique game altering abilities and stats, massive damage dealing weapons, or stocking up on useful power ups and lives all have their own distinct priority when strategically approaching the game’s wave of monster chaos.

The visuals are as satisfying as any vintage arcade game could pull off, and the fluid 60 frames per second allow some of the most precise movements within the hectic genre. Random projectiles fired from enemies and the dangerous hazards that seem to litter the later levels in the game add to some of the most frustrating deaths in the title, further keeping the player on their toes. But with the useful grinding system in play, there’s never really a feeling of being stuck on one particular stage.

Riddled Corpses EX delivers an exciting, fast-paced retro shoot em’ up experience that pushes the player to the limit. Demanding 100 percent of your attention while sifting through the chaotic waves of monsters, you’ll be sure to lose track of your day when engaged within this addictive twin stick shooter.

While the frenetic gameplay of the old-school arcade shooters can become an immediate irritation of overwhelming feelings almost instantaneously to many, Riddled Corpses EX helps to aid these suspicions. With a slew of new features piled on to the same addictive gameplay, Riddled Corpses EX proves that sometimes simplicity is best.