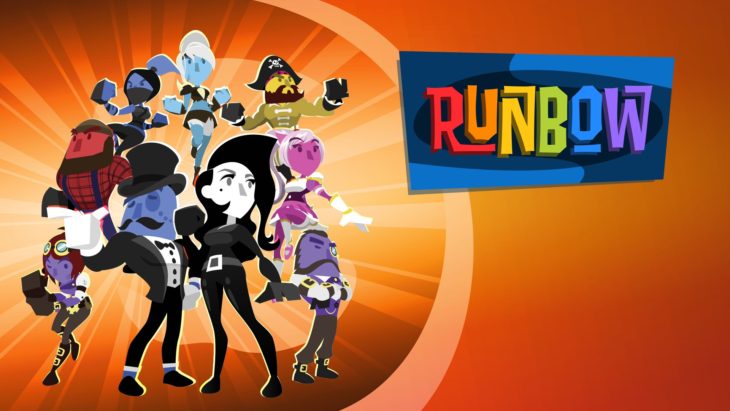 Running Through The Colors

Runbow challenges players to leap across short platforming levels with a constant feeling of pressure to safely land of coordinating ledges. Dodging various hazards and competing against the color shifting background provides a unique set of obstacles that continuously push players to the brink of insanity.

While much of Runbow is multiplayer party focused with modes like King of the Hill and Arena, there’s still a solid amount of fun to be had in single player. The main Story mode has players running through tons of difficult levels memorizing the color shifting patterns. As players navigate through the platforming levels utilizing the easy-to-learn skill set of jump, double jump and various boosting jump techniques, players must also be sure to land on specific colored ledges.

As the background color shifts every couple of seconds, coordinating hued platforms will subsequently disappear. Timing leaps just right and the knowledge of knowing which color hue comes next is crucial in success, as well as connecting on the various jumping techniques. Using the upward boosting jump can be a crutch for those who often miss on a disappearing ledge, and the horizontal air dash can come in handy when stretching for the life-saving platforming.

Every level is timed and acts as a time trial race to see how quickly you can run through each level. This is where the memorization is key for successfully reaching the end trophy as quickly as possible. Expertly pulling off the leaping techniques and becoming in sync with the color-swapping background can become extremely fulfilling when done right, but may also lead to some rather frustrating moments when buttons don’t correspond with what your brain is telling your fingers. Most mistakes are often made out of rushing your character into a whirlwind of last second leaps and double jumps.

Aside from the main story campaign players can also participate in up to 8 player multiplayer, either online or local. While the traditional Run mode has players competing against one another in the timed level areas, modes like Arena and King of the Hill change-up the formula. Arena has players utilizing the simple move-set of melee attacks and air dashes to wipe out enemy forces (and each other) along the color-shifting levels, while King of the Hill is more of a race to the top of a series of ledges. Each mode offers a gritty and competitive experience perfect for any enthusiastic party goers. And with the addition of multiplayer online, players aren’t limited to having their homes invaded by a corral of friends, instead opting for an experience with players all over the world.

The Bowhemoth mode provides the most challenging experience within the entire game and pits players against one long level with no saved restarts. Tallying up deaths with a constantly running timer, players must escape the belly of the monstrous behemoth surviving a plethora of dangerous obstacles and enemy hazards, all while the background continuously shifts. For players looking for the hardiest challenge in Runbow, Bowhemoth mode meets these expectations exceptionally well.

While the idea of Runbow is simple to understand and the controls allow for anyone to pick up and play, mastering these color shifting levels becomes increasingly difficult – but manages to keep players engaged. With the short level length – except for Bowhemoth mode -, tons of unique level designs, hordes of unlockable recognizable characters and a nice selection of varying game modes to conquer in either solo or multiplayer modes – Runbow offers a uniquely old-school style of gameplay with a modern twist.

For anyone looking to challenge themselves in a platforming adventure race against the clock, Runbow offers exactly that. With a unique spin on persevering through constantly changing obstacles, simple controls and abilities that stay the same no matter which character you choose to play as, Runbow is as user-friendly as they come. The constant change in colorful backgrounds which throws memorizing oppositions your way has a subtle difficulty curve – which, in turn, has a knack of pushing players to saying “Just one more try”; even if you’re not thoroughly enjoying yourself.