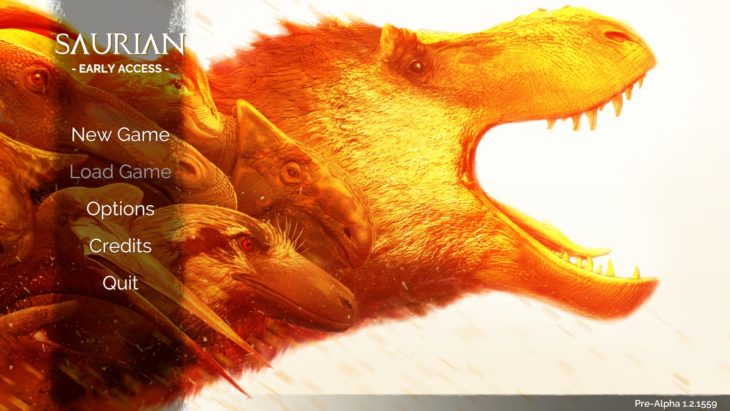 Saurian is the dinosaur simulation-survival game from developer Urvogel Games. It’s currently in Early Access where the game is in Alpha right now so there’s plenty of content to come in the future. Right now there is only one playable dinosaur: the Dakotaraptor. More will be coming in the future in addition to other features such as a multiplayer.

Players start life as a hatchling surrounded by their family. However, life as a baby dinosaur is hard and death comes easily. Whether it’s being stepped on by a bigger dinosaur, getting eaten by your cannibalistic parents or discovering that log in the water is actually a giant hungry crocodile. There’s lots of ways to die in Saurian and the game doesn’t explain very much when you’re thrown into the world.

Unlike other dinosaur games, Saurian aims for realism. The world reflects what it would have been like in Hell Creek during the Cretaceous period. The developers have clearly paid a lot of attention while crafting the world and filling it with plants that would have existed back then. In addition to this, there’s a variety of different types of dinosaurs in the world.

One of the highlights of the game is the incredible AI system. The AI has been designed to react to the player according to different situations. So a T-rex won’t always try to eat the player. As a result, some incredible moments occur in this dynamic world which are very memorable.

While there’s a lot of great things about the game, it’s worth noting that there are some bugs currently in the game. In addition to this, the game feels a little sluggish at times where movement is a little awkward. These are things sure to be addressed by the developer in the future however.

It’s a great game that still needs some work to perfect the gameplay. However, even at this stage it’s still worth a purchase for dinosaur fans.