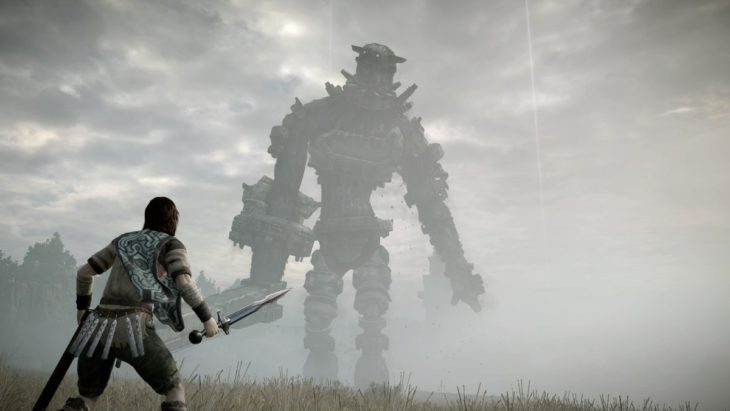 Giving Yet Another Reason to Embark on This Timeless Classic

The insurmountable adventure title originally released on the Playstation 2 – Shadow of the Colossus – has brought joyous wonders of scaling massive colossi into the gaming world for well over a decade now. With it’s now third appearance in as many console generations, Bluepoint Games has recreated the epic masterpiece from the ground up suited for the PS4; and it plays, looks and delivers as brilliantly as ever.

An ambitious and mysterious journey through forbidden lands is told through the limited dialogue that follows the Wanderer. Determined to bring back the life of his loved one, he embarks out into the vast, mostly unpopulated world to bring down the colossi that act as the only inhabitants in the land. Using only your sunlight sword, bow and your faithful steed companion – Agro – you’ll seek out the enormous colossus and pinpoint their weak spots to bring down the massive foes.

What the game doesn’t bring to the table is the same prominent direction that makes Shadow stand out among the countless adventure titles that came both before and after its original release. Exploring a vast land on horseback is all-too familiar in today’s modern gaming world, but Shadow’s world is seemingly empty with only the beautiful geography, landscapes and, of course, Colossi to keep the player in awe. In any other game an empty map would trigger boredom almost immediately, but in Shadow that’s exactly what makes the game so impressive.

The constant feeling of isolation, overwhelming resolve and curiosity is the perfect formula for Team Ico’s collection of games, and it’s presented perfectly in Shadow of the Colossus. The gorgeous revitalization of the forbidden lands, and the colossal giants that roam, are nothing but an awe-inspiring compliment to the original game. The grass blows swifter, colossus look as breathtaking as ever and the diverse lands filled with mountains, plains, dried lakes and ancient ruins shows us just how ahead of its time Shadow actually was.

Even in today’s modern world, the concept and puzzle design behind Shadow of the Colossus is as unique as any other adventure game out there. Using the sunlight to not only discover the location of your next targeted colossus, but as well as pinpointing the vital weak spots that are found along the massive, and often furry, colossus body. Using the body fur to scale various points of the colossus is crucial in finding the vital point for driving your sword inward for the most damage dealt. This gameplay is what Shadow surrounds itself in, and it works to absolute perfection with just enough playtime to keep it interesting from start to finish.

Although the game looks and plays beautifully, the same cannot be said, however, for the one weak spot of the game itself. Your trusty horse companion Agro is a huge help, not only for traversing the land twice as fast, but for tackling some colossus later in the game. That being said, your steed can be increasingly frustrating when attempting to mount in the midst of battle, as you must be directly on the side of the horse. There’s no auto-correct when trying to mount from the front, rear or even angled on the side, which can lead to some rather rage-inducing moments when in the thick of it. On top of the initial frustrations of hammering down the mounting tactic, the overall control of Agro is clumsy and often infuriatingly difficult to control around turns and cliff-sides.

Many colossus later in the game may be equipped with the ability to shoot projectiles at the wanderer, leaving an emphasis on quick reaction time to dodge these deadly attacks. Staying mounted on horseback is an excellent way to steer clear of said attacks, but when trying to quickly hop on Agro in the middle of a colossus attack – or steer out of the way while on horseback -can prove quite frustrating when the action box is so limited. However, this minor issue isn’t necessarily a deal breaker, as all it takes is a bit of hard-earned practice and familiarity to get the positioning just right.

Still Nothing Short of a Wonderful Experience

The limited dialogue, beautifully rendered visuals and improved score are all noteworthy additions to the remake of the epic gaming classic. But those new assets only mark a portion of what makes the new and improved Shadow so accepting among today’s gaming community. The biggest improvement is the multiple control mapping options to better suit how games are played today. The dated and mostly awkward control scheme from the original release were exactly what made Shadow, at the time, stand out from other similar maneuvering titles.

While the gameplay, puzzle design and open world were all true positives in keeping Shadow of the Colossus impressively unique compared to other games, the button inputs weren’t as accepted. Luckily, Bluepoint has identified this as an issue for modern gamers, and has given players the option to switch between four different control maps. Re-mapping the controller inputs like grabbing ledges with the right trigger, or something as small as jumping with the ‘X’ button is a major improvement to those who experience multiple games with similar button mapping. And for those who wish to indulge on the classic feel, the option for the classic button inputs is still available among the controller layout options.

Shadow of the Colossus has always brought forth a huge sense of wonder, curiosity and completely unique boss fights. With the impressive visuals and updated controls, Shadow of the Colossus has aged perfectly thanks to the help of Bluepoint Games. There’s still nothing quite like the experience, and now players – both newcomers and veterans alike – are able to take on this colossal journey like never before.

There are plenty of reasons to play through Shadow of the Colossus if it happens to be a game that was missed with its previous two releases on the PS2/PS3. But now that it’s climbing its way beautifully to the top of the current gen totem pole, the remake of Shadow of the Colossus shows just how remarkably well the timeless classic has aged.