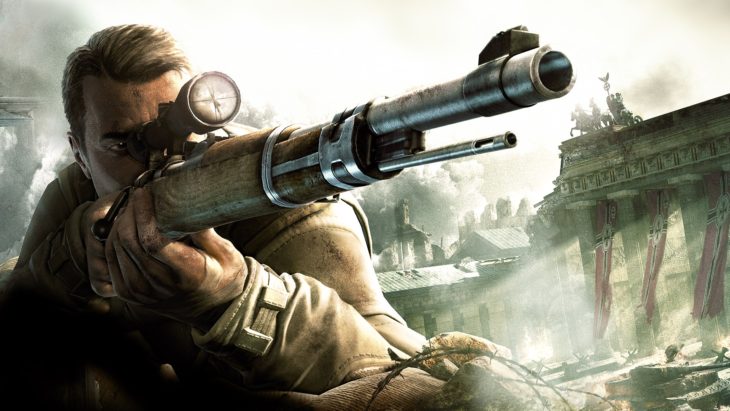 One More Chance To Halt The V2 Missile Program

In 2012, Rebellion Developments released the tactical third-person shooter that took players through a historical World War II setting fighting against Nazi soldiers as a top-of-the-line Office of Strategic Services officer and sharp-eyed sniper. The studio remastered their historical shooter bringing over the experience to modern consoles, and the game tends to hold up well considering its release now seven years ago. The remastered Sniper Elite V2 experience delivers a more polished set of missions than the original, but is the remastered release worth a dive back for returning players; or for newcomers who can easily get their hands on a more visually striking, modern shooter?

Check out our video summary review of Sniper Elite V2 Remastered below:

Players jump into WWII as an elite sharp shooter tasked with taking out members of the Nazi organization related to the V2 missiles. The game’s campaign is set up through numerous mostly linear missions requiring players to rendezvous towards specific objectives and take out waves of enemy soldiers. While each mission has players following a set path towards their objective, players may utilize their surroundings to find new routes and set up in various vantage points to strike fear upon their many enemies. Searching and sneaking your way through the destroyed WWII setting and wiping out enemy forces is the name of the game, and the game is played primarily through the scope of high-powered rifles.

Played like a typical third-person shooter, players may choose their desired load out of weapons during the loading screen, but are limited as to what types of weapons may be equipped. The primary weapon slot is used for sniper rifles, the secondary slot for submachine guns and a third slot for pistol fire. Players will also have various slots for grenades, mines and trip wire traps to create an exciting tactical experience throughout a dangerous war-zone. However, the game sometimes fights back against the player presenting an un-organic method of inhibiting strategy or any sense of stealth one attempts during various scenarios in the game.

While Sniper Elite V2 is most definitely best played with caution and patience, there are some elements in the game that can make this strategy somewhat difficult. Often times players are forced to engage in all-out sniper fire towards fields of enemy shooters, quickly eliminating any sense of stealthy gameplay that the game tries to have the player pull off. Luckily, once engaged and discovered by the enemy – while handfuls of enemies pour in – you won’t be faced with seemingly endless waves of enemies until you escape their eyesight. Eliminate enough soldiers and the enemy awareness will soon enough drop, allowing players to give the next section of a missions another go at stealth.

It may take a bit of time to pick up on the stealth and enemy behavior. While crouching or moving in the prone position are effective, moving at this snails pace throughout the duration of the game feels only fit for the most patient and tedious player. It’s a refreshing sense of realism that may or may not be purposely pulled off by the developers, but for those looking to “run ‘n’ gun” their way through missions will quickly become overburdened from all directions as enemies spawn in at certain moments of the game. It’s completely do-able in terms of quickly making your way through each mission, but taking your time through the game and learning how to stay out of the sight of the enemy feels like the more rewarding and gratifying method of completion.

Once players do engage in enemies, however, they will typically draw attention to other Nazi soldiers in the area, but once eradicated – and if done so quickly – players can sink back into the shadows. Taking optional routes to flank enemy soldiers or spotting up on a clear vantage point works as a suitable method for having an advantage over groups of patrolling enemies, and also negates needlessly giving your position away and opting to use the flawed and less than stellar performance of the secondary weapons outside of your sniper rifle selection. It’s not to say the sub-machines and pistols won’t help out in a pinch, but they typically don’t offer the most accurate targeting system and can cause unnecessary attention from other soldiers in the area.

And being a sniper-centered experience, V2 offers various ballistic strategies to be made aware of, most notably bullet drop over long distances. Similar to real sniper situations (or at least what I can imagine), players must utilize the ballistics mechanics to adjust their aim depending on how far away their target is. Players may also use recon binoculars to help spot enemies in the area and decide how their plan of attack is executed. But these two tactics are far from what makes players in Sniper Elite V2 feel like a legendary sharp shooter. But the ability to hold your breath and briefly slow down time accomplishes this affect to great extent.

As seen in other shooters where players can use scopes to pick off targets, emptying your lungs allows for players to carefully fire away at soldiers at specific parts of the body. Players are limited as to how frequently one can use the slowed time ability, but can be used to take on more difficult situations when surrounded by relentless enemies. Finding, scoping and picking off soldiers in rapid succession, utilizing your recon binoculars, careful aiming and holding your breath for a steady aim allows for Sniper Elite to provide a masterful experience, but the brutal x-ray bullet-tracking camera takes the feeling to another level.

Quite often within Sniper Elite V2 players are treated to a cinematic-esque bullet camera that follows a successful shot from the player’s rifle all the way to the exact point of impact on your engaged target, following the bullet along is projected path the entire way through. Hitting crucial vital points, brutal headshots and taking out soldiers while on the move offer up extra points which are portrayed on online leaderboards for comparison. The extra footage of a bullet rifling through the air towards its target, shearing its way through enemy bodies is an exciting feature to add to an otherwise normal third person shooter. The effect of splintering through bones and piercing internal organs seen through an x-ray design helps deliver a much more exciting experience, helping separate the Sniper Elite series from other similar shooters; though, not too much.

The campaign will take players through missions full of enemy soldiers with each missions typically ending in either a fierce sniper battle or taking out key soldiers apart of the Nazi army. While most missions offer the same strategies and rarely stray from the path of “sneak, snipe and exfiltrate”, the pace works well for the overall design of the game. There’s not much “fluff”, no tedious side objectives (other than the occasional hidden collectible to scour around the area for), but just straightforward game design and simple to follow missions. It’s a refreshing take in this modern era that seems to want to shoehorn in extra content which began to dwindle during the same time Sniper Elite V2 initially released. Sometimes it’s comforting just to play through an easy to understand campaign mode without the added stress of optional side tasks or over-complex missions design. However, that’s not to say that the missions are diverse enough to surprise the player throughout the campaign – as that rare, if ever, occurs.

And when stepping away from the single player campaign mode, players can step into the various multiplayer modes. Cooperative mode is exactly as it sounds, offering players to team up with another player and take on the story missions with a partner. Having two elite snipers wiping the floor with their high-powered rifle is a fun experience, but often feels as though the campaign missions are better off as a single player experience rather than over-powering your way through with a partner.

Other online modes include fending off a number of waves with a partner, various bombing missions which task players to find and repair a vehicle before the area is bombed and the more complex mode called Overwatch. Tasking players with two different roles in order to get from point A to point B, one must take a more direct approach and use the recon binoculars to point out enemies to the other player who is sitting at a vantage point and tasked with wiping out incoming enemies. It’s a fun and fulfilling amount of strategy between the players and offers up a nice change of pace outside of the traditional co-op gameplay.

The V2 Remastered package as far as multiplayer goes also comes with the DLC which introduced actual competitive game modes. Players can hone their skills and take on some of the best snipers in the world in traditional multiplayer modes, such as deathmatch, capture the flag and an exciting Distance King mode which has two teams squaring off and scoring points based on long-distance sniper rifle shots. All of these multiplayer modes were initially introduced as DLC content for the original release, but comes included in the full remastered package.

Sniper Elite V2 Remastered delivers a riveting shooter as players take on the role of a super-soldier sniper. There’s a decent amount of sniping to be had throughout the duration of the campaign mode, however, the poor side-arm or secondary weapon firing forces players towards their primary sniper rifle. While from afar, sniping is satisfying and effective, but once engaged in more close-quarter engagement, things can become a bit hairy in terms of execution.

Those yearning for the days of the Sniper Elite classic gameplay, Elite V2 Remastered successfully pushes one of the best titles in the series over to the modern era. While not remade from the ground up, the remastered visuals look as crisp as any remaster can while the animations and gameplay holds up relatively well. With an engrossing story following the OSS soldier through his missions to halt the V2 missile launch and end global terrorism in WWII, the cooperative and various multiplayer modes adds more depth to the overall experience. All in all, Sniper Elite V2 Remastered is exactly what one could expect from a remastered third-person shooter, especially if one has already traveled down the V2 road once before.

Review copy of the game of was provided by the publisher.