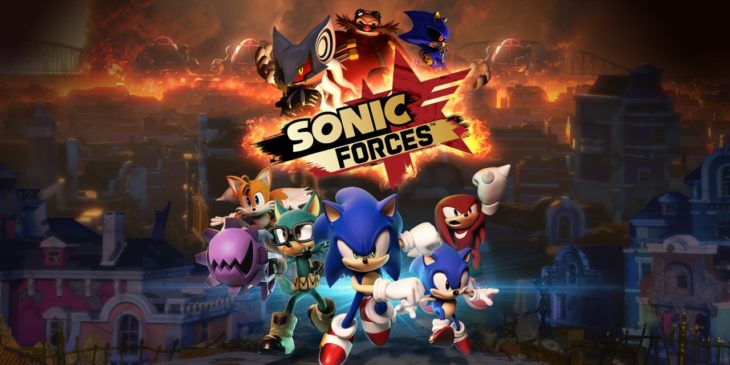 Round 2 for the classic and modern duo

Sonic the Hedgehog has already seen one instant classic, comeback of the century release in the hit 16-bit title, Sonic Mania. With that being said, the modern era of Sonic is far from over, feeding the appetite of those who crave more 2D and 3D mash-ups of everyone cast of animal loving, world saving, Dr. Eggman chasing resistance members in, Sonic Forces.

The game takes the usual gang of heroic talking animals lead by the spiky blue-haired hedgehog, and pits them against Dr. Eggman and his dangerous allies. This time, Eggman has created the ultimate force to stop Sonic – a virtually indestructible foe by the name of Infinite. Harnessing enormous, near-limitless power from the Phantom Ruby, Infinite is able to match Sonic’s blistering speed.

At the start of the game modern 3D Sonic is beaten-up and taken prisoner by Dr. Eggman and company. Some six months later, the resistance gang made up of Knuckles, Tails, Rose – and all of the other ‘good guys’ from the modern era of Sonic the Hedgehog titles – have taken the fight to Eggman, determined to stop Eggman once and for all. One of the new (and only) additions to Forces when compared to its predecessor, Sonic Generations, is the rookie character by the simple label of, Avatar.

Forces is split between three different characters across a campaign of 30 stages. With the addition of bonus stages, repeating levels for online SOS missions and obtaining all of the familiar ‘red star rings’, Sonic forces offers just a bit more to the game than its main story mode. Earning rewards like clothing, accessories and numerous variations of the powerful Wispon weapon, are subtly enticing ways to squeeze a bit more playability outside of the story.

If you’ve played through Generations then the play style of Forces will seem all-to familiar. With hardly any noticeable changes to the 2D/3D mash-up formula, Forces offers little enthusiasm for taking the franchise to the next level. Constantly rolling back and forth from the third person camera angle to the side 2.5D perspective leaves a thrilling adrenaline rush when accomplished perfectly, but many nuisances stand in the way of the Blue Blur and his inevitable path to Dr. Eggman.

When playing as modern Sonic, the camera angles shift around showing off the tremendous speed and agility our spiky-haired speedster effortlessly demonstrates. Useful combat maneuvers like the homing strike, boost and the classic spin dash ability all play their part in aiding the resistance team to the Earth-threatening forces. Boosting through enemies is a breeze, but the platforming obstacles come quick, sometimes leaving the player with very little, or no warning of a ledge leading to Sonic’s tumultuous demise.

Classic Sonic may look a little more familiar to the veteran Sonic fans, giving the modern era an old-school twist. While shot in a 2D perspective camera angle, the 2 dimensional Sonic also has less skills available. No homing attack and no boost leaves this mode less satisfying, and all-together a bit of the slower pace of Sonic games. While boost pads, classic item boxes like speed shoes, invincibility sparkles and the bubble shield, as well as a variety of stage-only obstacles, the classic Sonic stages still manage to mold itself appropriately to the pace that Sonic Forces is able to present itself in.

A new ally joins the resistance

The third and final playable character joins onto the team as a newbie from the city and goes by the name of Avatar. Looked to as a last choice, Avatar will have to prove their self to the team so that they can handle whatever is thrown its way. Equipped with an elusive grappling hook, Avatar is capable of swinging through levels, over enemies, or sometimes reeling into foes for a quick kill. Another factor that comes with the unique Avatar character is the powerful Wispon item.

Creating your Avatar comes in a few simple steps, but throughout the course of the game players will unlock tons of items and accessories to choose from. On top of clothing items and other fashionable statements found in your Avatar’s wardrobe, different Wispon items may be equipped, changing certain skills that help you across the levels. Each Wispon weapon has one attack ability and one platforming skill. While the combat maneuver, like a flamethrower, asteroid blaster or lightning whip, while the helpful skills can help guide you into different areas of the levels.

Players will continuously shift between the three playable characters throughout their chase towards Eggman. Most levels consist of quick platforming obstacles, robot enemies to destroy and tons of rings to collect as apart of your life system. Various boss stages will make their appearance in the game, providing similar sequences of events to overcome the conflicts. Chase sequences, sporadic QTE’s, dodging patternized attacks and button-mashing homing strikes all play their role in defeating the handful of bosses encountered in Forces.

Though the game has enhanced visuals and an excellent showcase of speed and precision, there are tireless portions that leave the player in frustrating situations. Many enemies in the 2D perspective can be hard to spot, and requires near-perfect vision when traveling at the many high-speed situations the game will force you into. The controls, especially during the hardcore platforming areas, are still flooded with the same spotty timing issues found throughout the modern era of the Blue Blur. Over-correcting and under-correcting can be frequent issues, usually in the later levels where an increased number of moving and enemy riddled platforms litter the stages.

The 5 or so hour story mode in Forces is full of colorful and dramatic cut scenes featuring nearly the entire cast from the Sonic the Hedgehog series. Racing between the stages, the resistance team continues to push towards their objective of defeating Eggman once more, and his latest creation, the powerful foe Infinite. With a multitude level gimmicks and hurdles, hordes of enemies to bounce off and rapid button firing to fluidly speed through the levels still gives diehard Sonic fans an enjoyable experience.

Sonic Forces doesn’t add any game changing mechanics or carve a new path for the series, but rather contributes enhanced next-gen visuals, an extra playable character and a cliché, yet dark take on the Hedgehog’s franchise storyline. While the same formula of 2D and 3D camera perspectives mixes for the same results as its precursor, Sonic Forces still provides thrilling ride for the short duration of its linear story.

In a year where classic platforming stars are making their impeccably timed comeback (looking at you Crash Bandicoot, Bubsy and that Mario guy), Sonic already experienced his days of glory once this year in Sonic Mania; twice seems to be just too far out of reach for the modernized blue hedgehog to keep up.