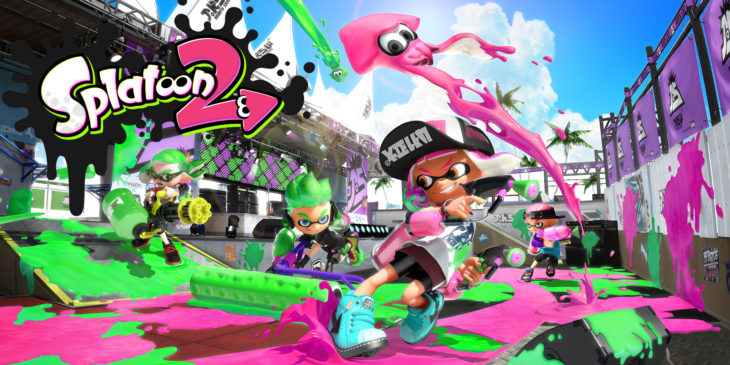 Splatoon 2 is an incredibly fun game with plenty of diversity to keep players coming back for more. It’s just a shame that Nintendo has allowed such minor issues into the game.

The Splatoon series is formed of two very unique shooter games. Similar to the first game, the second one is focused on using ink to complete different objectives according to the game mode.

At time of launch, there are four main gamemodes for players to experience: Turf War, Splat Zones, Tower Control and Rainmaker. The last three modes are ranked exclusive modes which can only be played in the competitive ranked section of the game. The ranked modes rotate on a two hour basis so players cannot play them whenever they want. They have to wait for the mode to rotate into play before they have a chance to explore each mode.  While this does mean that there’s always a high playerbase for the ranked mode which is good, it’s still sad to see that players are forced to wait to play their favourite modes.

Each game type does come with some instructions which are good. They give new players a chance to get a rough understanding on each type. However, this system isn’t perfect and some players still don’t understand the modes properly. For example, in Rainmaker players must take the weapon to a pedestal near the enemy teams base. The instructions tell the player to take it to the other teams spawn which leads to a lot of confusion and sometimes frustration for their teammates.

There’s also a brand new mode in Splatoon 2. Salmon Run pits four players in a small area to fight against waves of enemies called Salmonids in order to collect their eggs. There are different levels for players to fight through to reach the final boss. It’s a very nice change of pace from the multiplayer modes in the game however this co-op mode does come with a very annoying downside. It’s not always available to play. Nintendo has decided to restrict how often players can enjoy this mode by making it accessible at specific times only. At launch, this mode was much more limited. Nintendo seems to be listening to their players and are making this mode slightly more accessible. The mode is now becoming accessible for a full 24 hours each time now.

Just like the first game, there’s also a single player campaign called Hero Mode. Players are sent on a mission to save the Great Zapfish by fighting through the evil Octarians. The biggest new development for this mode is the ability to unlock different weapons. Players are no longer forced to playthrough with a specific weapon which is great to see. It also features several very entertaining bosses such as a giant evil toaster.

This amazing and unique shooter game does come with a few major problems. The difficulty of playing with friends during the Turf Wars mode is unforgivable. It’s admirable that Nintendo has tried to limit team stomping in the casual mode. However, it makes it almost impossible to play with friends. Players are forced to join their friend’s lobby however, they have to wait until there’s a space available. As a result, players can be left waiting up to 30 minutes just to play a few matches with their friend. Another critical issue is the inability to leave a lobby once the player has started searching for a match. Few other multiplayer games use a system like this, and it forces players to commit to a new game even if real-life issues arise before the match begins.

Lack of voice chat is potentially the biggest upset in Splatoon 2. There’s no way to communicate with other players through the game. Players are forced to use the Nintendo Switch app on their mobile phones instead. Even when using this app, players can only speak to their friends. Considering how temperamental the voice chat system can be, using Discord through the mobile phone seems like a much better option even if it is still slightly awkward.

Despite the minor but frustrating issues, Splatoon 2 is an amazing game. All Nintendo Switch owners should be playing this game right now.