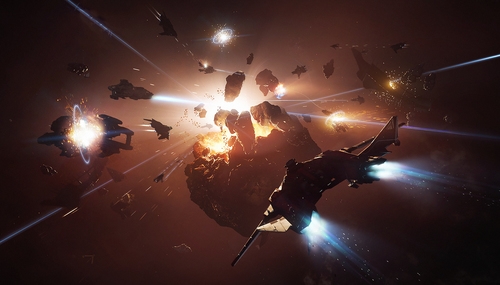 Crowd fundraising projects can be a hit-or-miss affair. Sometimes the project arrives on time and wows backers, other times it doesn’t even arrive at all – such is the fate of crowdfunding and art in the modern era. One game has made the headlines more often than most, and that game is Star Citizen.

Still unreleased space-based massively multiplayer online role-playing game (MMORPG) Star Citizen continues to break records in crowd fundraising with reports from across the web indicating that the upcoming space trading and combat videogame has not only brought in more money than every other videogame project on Kickstarter, but also it has brought in more money than all other videogame projects on Kickstarter combined…by a factor of two.

Those are huge numbers, in other words.

Cloud Imperium Games fundraising success allowed the team to expand the scope of the original project, a process that has repeated after every successful fundraising round.

Polygon notes that this is the second year in a row that Star Citizen has taken in more money through donations than other games on the platform.

In fact, Star Citizen has met such fundraising success that the single game is now a miniature universe of titles, each of which share technology with the other.

Interestingly, Star Citizen raised less in 2017 than it did in 2016 but only by about $USD 2 million. Both years the project outraised other videogame projects which were relatively flat for the year according to Polygon.

Taking data provided by both Cloud Imperium Games and Kickstarter, Polygon discovered that Star Citizen has raised double the amount of more than 700 combined projects. But, as with all numbers, there are a few caveats.

The amount of money being returned to backers was not released, for example.

Star Citizen and its companion single-player experience Squadron 42 are amazing examples of the power of crowd-based fundraising. Rising from mere obscurity to becoming one of the most-wanted titles for the PC in a long time, Star Citizen draws its share of controversy through its mere existence.

Cloud Imperium Games’ modular development process for Star Citizen tasks programmers to finish specific game modules individually. These modules will then be united together in one game.

These development projects include the first-person shooter elements, open world elements, and other gameplay features. The integration of the different gameplay elements is what makes Star Citizen unique. Star Citizen’s multi-varied gameplay approach that approximates the range of choices a player could make within the setting – that is, the game goes out of its way to make possibilities endless.

Wonderfully crafted environments with open-world exploration along with traditional objective-based gameplay options will have gamers sinking countless hours into Star Universe’s world. The continual Star Citizen fundraising push only adds to the litany of features the game has.

Delays Inevitable As More Features Added to the Core Game

One criticism of the game that is hard to ignore are the delays. While Star Citizens’ fundraising prowess makes news, the game’s delays make backers worried. Backing a Kickstarter project is always an iffy proposition, but when it has grown to Star Citizens’ size every small event can become a huge scandal.

Like many games of its ilk, Star Citizen will be a player-driven experience. Taking the extra time necessary to make sure they get that right might justify everything in the end. Star Citizen represents the first of a new wave of videogames, games that are backed and brought to market by the fans and community, not by corporate fiat. Star Citizen’s fundraising success or failure will only become a part of its larger tale. Let’s hope for the best.