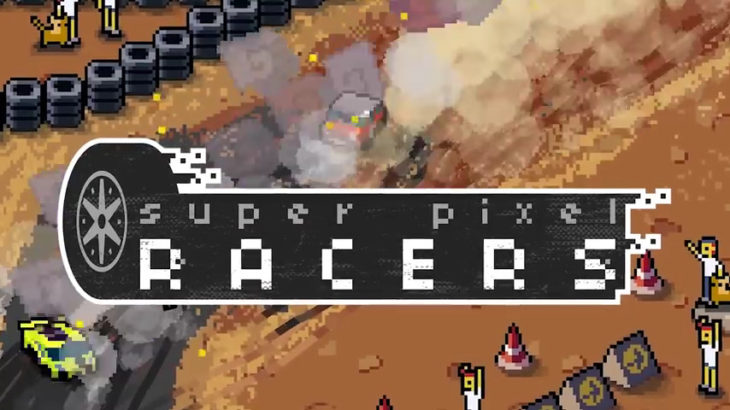 A Little Bit Of Bit-Sized Competition

Invoking the slippery spirit of drifting around bends in a retro-style design, Super Pixel Racers is a fast-paced racer for fans of the vintage pixellated experience. With iconic vehicles represented in 16 bit form and tracks based in real life areas around the globe, there’s an endearing amount of charm to these bit-sized racers that blends wonderfully with the simple, yet, competitive nature of the game.

There’s something incredibly satisfying when you first fire up Super Pixel Racers and quickly adjust to the simple controls. With the left stick controlling every direction of the car, one button for an e-brake-like drifting maneuver and another for smashing the turbo – it doesn’t take long to catch on. Taking sharp turns one after another is an ultimately fun experience, but the entertainment value can just as quickly begin to wear off.

Now, that’s not to say that gliding around dirt corners, boosting through crowds of opponent cars and recording the best lap time isn’t executed to electrifying levels. With a full grid of racers equally matched against your chosen drift machine, the rally events often produce white knuckle moments with every minute and half long race. The simplicity of each and every race meshes perfectly with the short race tracks and quick race times.

The vintage pixel design of the game also speaks volumes about the simple edge that’s created with the pixel drifter. Cars resemble real life racers we see on the tracks around the world, most notably popular rally cars. A Lancer Evolution or WRX represented in pixel form is oddly adorable while creating a pocket-sized addiction to whipping your 16 bit ride around courses taking place in real world locations.

Related: The Gardens Between Review – A Simply Charming Puzzle Adventure

Along with purchasing new cars and advancing into higher tiers of races, players also have the option of upgrading their favorite rides. Acceleration, top speed, drifting and boost are all upgradable up to 10 levels, but tends to cost a bit of money. While, at first rifling through races will earn your car a few upgrades from each category, after a while it starts teetering into the grind of repeatedly completing the same race over and over. This particular facet is the key ingredient that will most likely have you turn in your keys and retire from pixel drifting for good.

A Bit Of Grinding Here And There

And, while advancing through your racing career you’ll undoubtedly make your way up the ranks into faster, sleeker cars – there still seems to be an up hill battle between your money earned and your slow-growing car collection. Most races typically net you only a few hundred dollars while mid-level upgrades and higher range into well-above the thousands and new cars costing up to five digits of hard-earned cash. However, with not much variety from level to level, you may find only a subtle difference between grinding out cash for upgrades and actually advancing through the different events and cup races across the campaign.

The racing itself does a healthy job of livening up nearly every event. With destruction physics keeping players at the edge of their seat with every fender bender, wall tap or opponent smash, players must be careful not to damage their vehicles too much. Perhaps your aggressive driving does happen to get the best of you, players won’t simply forfeit the race, but must quickly flick the left analog stick a specific number of times to recover your vehicle. However, while the “Mr.Fix-it” method of recovering your car mid-race is a nice touch, restarting might as well be a better option for the less patient racer.

The diversity from course to course may only vary in modest ways, there is a good variety of events to help keep things interesting. The traditional Rally Cross pits a large group of racers in a standard lap race around a quick and slippery course. You’ll find yourself taking these events on most, but there are plenty of other event styles that find their way into the mix from start to finish.

Related: Ninjin: Clash of Carrots Review – Slashing In The Name Of Carrots

Time trials pit player against the clock in across a number of races, while Drift Shows keeps the single racer approach – but instead has players tallying up a specific number of points with every successful drift to meet the required goal. And if racing is starting to wear players out, the Takedown mode is a delightful change of pace in the retro-styled drifter. Like a pixelized version of bumper cars, players will make their way around a crowded course looking to wreck a specified number of opponents within the allotted time. With each campaign tier shuffling through the many different event types, there’s just enough variety to keep players, and their excitement, from stalling out too quickly.

Players aren’t forced to strictly competing against AI opponents in the single player campaign, but may also hop into different multiplayer modes. Whether you’re focused on traditional local couch multiplayer or taking your skills online, Super Pixel Racers does offer a gripping challenge when faced against proper racers. Getting in the groove of every race course, effortlessly sliding between turns only to powerfully boost out of each corner becomes something of a science. a Science that begs for perfection and demands a slight learning curve the faster your car(s) become.

There’s something to be said about a simply designed racing game with equally simple mechanics. While racing from event to event certainly provides an enthusiastically exciting string of races in Super Pixel Racers, upgrading or purchasing new cars starts to feel like an unwanted chore. The execution is near perfect for this pocket-sized drifting experience and provides a visually appealing collection of popular cars to aim for, but there’s little else to keep players pursuing one victory after another once you’ve had your fill.

Review code was provided by the publisher.