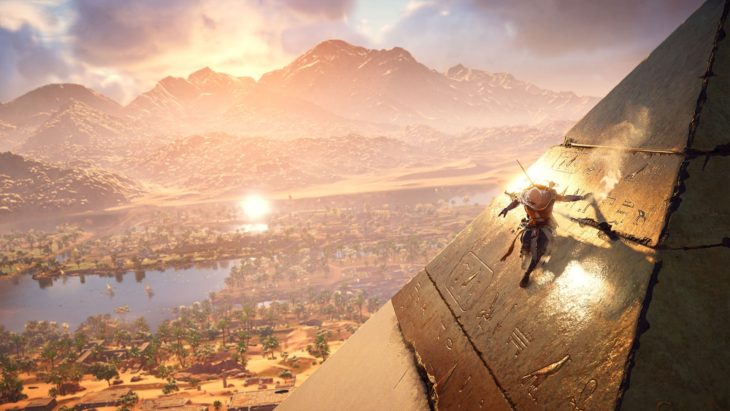 Now Running with a Full Head of Steam

For years Ubisoft has been a major source of some of the most prominent video games in the industry. From Beyond Good & Evil to Assassin’s Creed, to The Tom Clancy series, Prince of Persia and Far Cry – Ubisoft has either developed or published a monumental amount of memorable gaming experiences throughout their 30+ years in the business. However, within the past decade or so, many have sworn off the veteran gaming company due to stagnate gameplay and rather monotonous content.

Now, this isn’t to say Ubisoft has peaked or they’ve gone under and are currently knocking on the door of leaving the industry. In fact, quite the opposite. As veteran of a company Ubisoft is there has undoubtedly been a few missteps in their execution within their extensive library. While they’ve been able to handle themselves appropriately, they’ve also been able to do what many AAA companies would never think of doing. Listen to the fan base.

Scaling towers to unlock portions of massive open worlds, completing a list upon list of side objectives to liberate surrounding regions from opposing forces, mediocre character development and tons of mostly meaningless hidden collectibles have been a huge part of the Ubisoft algorithm for a couple of generations now. Enough so as players have dubbed the repetitive gameplay as the “Ubisoft Formula”, further throwing the popular game company into the fires of fans raging from fatigue and an overwhelming feeling of being burned out from the chore-like gameplay style.

However, most recently Ubisoft has displayed an unbelievable ability to listen and adapt to what their fans have been craving. A game like The Division, from developers Massive Entertainment, released to sub-par reviews piling on complaints about lackluster content and uninspiring gameplay. Calling the game tedious and brimming with repetition, many were ready to lay off yet another average release with massive potential from Ubisoft and the suits at corporate headquarters couldn’t care less. Or, so we thought.

And with recent history, we’d all be right to assume that was the fate of, not only The Division – but Ubisoft as well. But what happened next is anything but tragedy as The Division began receiving loads of updates and enhancements to this day that have increased game playability and easing off that sickening fatigue, grind and boredom. Along with the numerous paid DLC to increase gameplay, the game continues to receive support from two more free content packs, as well as additional game tweaking updates. The Division has since seen a steady climb back from obscurity and into the eyes of the games industry; right where it belongs.

Watchdogs 2 is another great example of adding more to the game for the player to experience. Relieving themselves from the tiresome and bland gameplay that held the first Watchdogs back, the sequel demonstrated to fans that the veteran company was listening. With loads of additional side quests and extra content that differ from the usual repetitive tasks on top of a living, breathing San Francisco Bay area – Watchdogs 2 was a promising start to bringing more depth the Ubisoft games.

Dipping into first party territory during the summer of 2017, Mario + Rabbids Kingdom Battle was a game many readily shrugged off well before release. Pretty much the moment the game was announced most fans wondered ‘Why?’. To the surprise of almost the entire gaming community, Kingdom Battle brought something totally unique, and not just to the Nintendo Switch’s growing library of games but to the industry itself. The strange mix of Ubisoft’s Rabbids with Nintendo’s leading mascot worked so well many refer to Kingdom Battle as one of the Switch’s most exciting titles to date, along with Breath of the Wild and Super Mario Odyssey.

Fast forward a bit and now we have one of the company’s most cherished franchises facing arguably its most important release in the series yet. Assassin’s Creed has whisked players off into a number of historical settings from the Italian Renaissance to the French and American Revolution to the Industrial Revolution – the series has certainly dazzled in way of themes and settings. However, throughout the years fans have expressed their discontent with the continued run of stale and otherwise boring entries in a series that has had trouble identifying itself in recent years.

Ubisoft decided to take a year off from their standard annual releases in the series, and the extra time helped tremendously. With Assassin’s Creed Origins Ubisoft was finally taking the series to bold new heights that, not only placed players into a setting they have been begging for, but completely rejuvenated the entire series with a number of gameplay mechanic enhancements and a reinvigorating amount of exciting content. Embracing the RPG lifestyle of the action/adventure game, players now find themselves deep within a game brimming with tons of storied sidequests replacing the tedious objective lists, a full range of character development skills and weapon/armor crafting, and an all-new reconstructed combat system that challenged the player to hone their skills and truly experience the thrill of strengthening your abilities. The Assassin’s Creed series was officially reborn.

Pushing even further ahead to their most recent release – Far Cry 5 – the bulk of the gaming community couldn’t wait to plunge head first into the dangerous lands of Hope County. With clip after clip of riveting gameplay footage and a plethora of unique character/story trailers, Far Cry 5 certainly seemed to be making a statement within the company. The remarkable turnaround over the course of the last couple of years all funneled into this one release which had “make or break” written all over it.

Perhaps one of the most repetitive series that comes out of Ubisoft, the many changes in the Far Cry formula were either rebuilt from the ground up, or scrapped altogether in the latest entry. Far Cry 5 did away with many instances, in turn leading to a more natural and organic feel of exploration. The dreaded radio towers made playing through and unlocking portions of the previous maps a menial task with a heavy sense of uneventful progress. Those are gone.

While discarding the fat, Ubisoft continued on the upswing brightening up gameplay and loading in content at an almost overwhelming rate. Discovering new side quests and the litany of other side challenges were found through deeper exploration, speaking with the many NPCs or just venturing out into the wild takes the place of climbing to the top of the many radio towers. Far Cry has become a a deep exploration game once again, and it’s all thanks to Ubisoft’s new discovery system in play, and the removal of the mini map.

It’s no secret the past year, or more, have shown some of Ubisoft’s best work in the company’s long history. From the surprising success of Mario + Rabbids to the reinvented mechanics in Assassin’s Creed Origins, to the massive immersive world flooding with rousing content featured in Far Cry 5, and so much more – Ubisoft is showing the fans they’re listening. They’ve shown us just in the last year where the “Ubisoft Formula” is headed; and why it’s for the better.