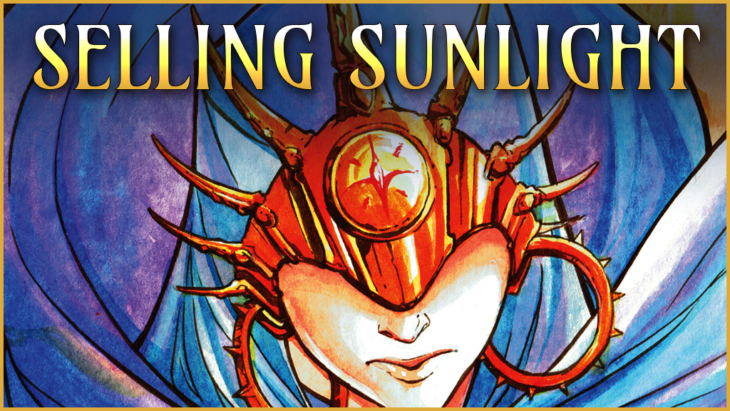 Earn your identity back as a faceless wandering merchant in, Selling Sunlight

The in development narrative RPG – Selling Sunlight – has officially earned its pledge goal on Kickstarter, and will begin pushing for release on the PC. Trade, barter and conspire against the sun in this upcoming imaginative RPG from developers, CoseBelle.

A story about a faceless merchant, Selling Sunlight tells the tale without the use of combat, but narrative dialogue and beautiful artwork. With your face stolen from the sun, you’ll explore the breathtaking lands in hopes to conspire against the sun, and earn your identity back. Traveling from merchant to merchant across surreal lands, the main protagonist will learn everything they can through story driven dialogue and casual exploration.

Taking the combat out of RPGs

A focus taking a stand away from the murderous intent that is heavily developed in today’s modern video game era, the team at CoseBelle wishes to bring a title that brings more charm and restfulness to the medium. In a world that takes place 300 years ago, Selling Sunlight thrusts players into a world not ravaged by man, but divided by nature. The Earth in Selling Sunlight is at a complete standstill, and is split in two halves of extreme temperature conditions, while the small strip in the middle creates perfect living conditions for all who populate the world.

Living in a town located at the only habital zone in the world, you survive and explore in the town of eternal sunset. Between two extreme temperate hemispheres, the frigid cold lands and the charred, burning half, the player will find themselves exploring a handful of various locations throughout this strange world. This strip of micro habital lands homes different civilizations, who all live in peaceful harmony.

A land amidst rather odd living conditions

Across the scarcely livable lands, there are 5 locations to explore as a wandering merchant. The Orange War Machine is an enormous machine built for devastating wars. Now abandoned, drifters and other outcasts use this vessel as a place to call home. The Yellow Beehive is run by an economy based off of honey over gold, and the traditions of tribes continues further into the future of civilization.

Green Hamlet is a village populated by dreary plant-people, living amongst trees with leaves which are made out of glass. The creative and surreal landscape of Teal Aeteneum, full of sea-librarians and their schools of fish made out of books. Finally the lands where science has reigned victorious over the sun at Indigo Peak. Fierce machines erupt underground, beneath the mountainous terrain of Selling Sunlight.

The Sun will leave you faceless; It’s up to you to earn it back

Introduced into a dangerous world which has ceased to rotate, the sun beats heavily down upon one hemisphere, while the other freezes in icy temperatures. While the Sun brings His heavy rays down upon the scorched Earth, the populace look up and praise the sun for His constant shifts, changes and always improving himself. The villagers that create the world of sun-followers only wish to be burned up by the great Sun, only to be infused and become one with the all-true being.

The essence of the sun is crucial in powering the magic spells used by the civilized world, as well as the technological machines. It is all-knowing and breaking any forbidden rules against the sun will place you in a place of obscurity. This is your story. Banished from the ways of the sun after breaking ancient law, a magical mask placed over your face erases your identity. You become faceless in the eyes of the sun praising heretics.

The game’s story places the wandering merchant on a journey to get their identity back. Accepted into the Merchants Guild, you now travel from city to city trading your goods wherever they are needed. Exploring the lands of Selling Sunlight will bring you across many different merchants, musicians and bards, scholars, missionaries, among other wandering travelers. Make new acquaintances, complete side quests for new friends and enjoy the beautiful world from a merchants eyes.

As a merchant, wandering and meeting people are not your only tasks. You will be able to barter, haggle and trade goods and services to keep your journey from ending. Every city and location has their own wares and products which stay in demand. As you travel from location to location, you will use your keen skills to buy low and sell high for a profit. Everyone is different, so using appropriate dialogue options and attitude adjustments are key in profiting off of other merchants. Taking the place of combat in this wandering RPG, selling and trading to earn your way back in to the arms (flames?) of the Sun and become someone with an identity again still sits as your top priority.

Being a narrative driven release, players have tons of options for giving their protagonist a fitting attitude. During conversation players are able to choose between four different responses set to an appropriate mood. Charming, friendly, rigid and gloomy are different attitudes to help choose how your faceless character is feeling during specific conversations. Some responses may increase (or decrease) friendship roles with NPC characters, as they will remember your character’s responses.

The team behind Selling Sunlight have been hard at work for over a year, and the title is gearing up for the next step in the development process. In order to give the game a boost is deserves, sharpen up the hand-painted water-color art style, place a solid musical score in the atmosphere, along with other necessary production costs, the team needs help from Kickstarter to reach their stretch goals.

Already surpassing its original pledge goal of just over $14k, the team can still expand on the game with more funds. Increasing their allotted funds would allow them to add more characters, locations and more events, with the possibility of adding more creative story writing to the game. With the goal reached and still just under a week to go, anything could happen to help the team add more exciting content to Selling Sunlight.

Exploring another world full of obscurity and beautiful scenery. Banished by all who worship the sun – which in this world is most of civilization – and wandering as a faceless merchant, Selling Sunlight is a narrative driven title welcoming all to enjoy what it has to offer. Rich storytelling is sure to drift along with the gorgeous visuals and awe-inspiring musical score to come. Follow the progress of this peaceful and sound narrative as it makes its way to the PC.

Check out the Kickstater page for Selling Sunlight now, and get your chance to play through the demo for a limited time. Become a backer and pledge to help make this beautiful looking title from the developing team CoseBelle release with the attention and adoration it deserves.