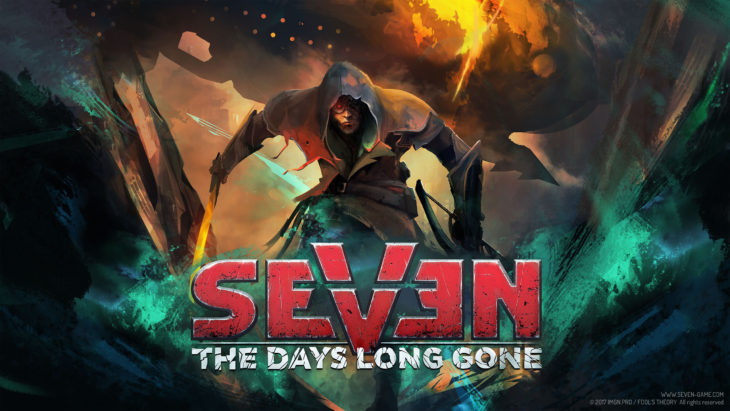 Traverse the Island of Peh, Be It Ground or Roof Top

Embracing the role of a master thief, slipping in and out becoming one with the shadows, Seven: The Days Long Gone takes an RPG game and combines it with a parkour/stealth adventure. A great deal of side quests, an interesting sci-fi/fantasy world full of all sorts of characters and monsters, and a deep stealth system that seems to flow through the isometric world almost flawlessly will leave many players surprised by the depth of Fool’s Theory’s latest release.

Taking on the role of Teriel – a master thief making a living off of the goods of others – you explore and sneak about the chaotic world ruled by the Vetrall Empire. Early on in the game, Teriel embarks on a dangerous heist to infiltrate a heavily guarded base littered with security cameras and patrolling enemies. Upon sneaking in and retrieving the coveted ancient tool, the Cypher, Teriel becomes tarnished by a spiritual force rendering him unconscious.

Now awakened on a giant air vessel sailing to the prisoner island of Peh, Teriel also becomes possessed by a daemon which is now his only way off the danger infested island; but only if Teriel does exactly as he is told. The world of Seven is amidst a rebuilding stage after a tragic apocalypse, sending much of the wealthy off the barren, poverty riddled Earth. With the two factions – the Technomagi and Biomancers – taking over Peh, the dangers only grow the further you dive in the story.

Combining Aspects All Across the Gaming Spectrum

The game is featured in slick isometric style and full of rich and futuristic environments. The parkour ability allows players to traverse the lands in any way they please, finding their own path to success. Hurdling walls and climbing across rooftops, Teriel’s best mode of transportation is the shadows, the roof…or bushes. Fighting waves of enemies doesn’t go over smoothly with the game’s tender combat mechanic, almost pushing the act of stealth onto players. Sneaking into factions and tightly secured areas for precious loot is a big part of the mission system in Seven, showing off the master skills our hero possesses.

Exploring the vast open world of Peh, players are technically able to explore to their heart’s content after only about an hour or so into the story. Though most of the map is locked in terms of legality in regards to the empire, players are required to consume Visa pills which allows players to travel freely into numbered zones. Zones are numbered 1-7 and stretch across the entirety of the map, finding Visa upgrades and unlocking further areas will allow slightly safer passage into the massive island of Peh.

The combat in Seven utilizes a simple two button attack system, along with one of the skills being able to power up and deal a deadly amount of damage. All things don’t roll over smoothly in Seven, however, as the combat can become increasingly difficult and overwhelming if caught in the middle of the action. Knowing this, players will have to stick to stealth in order to proceed along the path of The Days Long Gone. Slashing away with a number of different blades, swords, axes and other steel helps in a pinch or dealing with a small number of enemies. While the stealth assassination requires excellent patience when infiltrating into enemy territories.

As you make your way through the 10-15 hour story mode, there are tons of additional side quests and loot to be found all over the island of Peh. Using your stealth sense (similar to Assassin’s Creed’s eagle vision), players will discover loot or quest items all along the villages and postapocalyptic world. Exploring the world is as exciting as any open world RPG, but Seven brings a unique outlook in parkour in the isometric perspective.

A Massive Isometric World to Explore

The questing in Seven has plenty of typical fetch missions but reward the player with exquisite loot, equipment and interesting narratives. Also helping to add to the range of combat skills is a development tree which grants Teriel a number of useful skills by finding and equipping hidden skill chips. Pushing through the game, Teriel is bound to come across these little gems, adding a rewarding sense of discovery to the addictive RPG. Bartering with merchants, armorers or weapon smiths is also a viable option when coming across settlements and looking to upgrade you arsenal.

Throughout the game of Seven: The Days Long Gone players will find an incredibly deep RPG brimming with unique exploration and cunning stealth gameplay. The isometric camera angle, ability to free-climb across the sprawling open world map and the shadowy approach to slinking your way past enemy forces definitely provides a fun and enticing form of gameplay. The combat system is slightly flawed in that players become swarmed by near unlimited spawning enemies. This may push away any players not interested in taking on the game in the stealthy approach as intended, but rather try their hand at the furious action of slashing through waves of enemies.

Seven: The Days Long Gone stretches across a broad array of RPG elements and adds complimentary action features throughout the game. A story full of rich characters set in a surreal world destroyed by the apocalypse, following our charismatic hero, Teriel. The many faces you meet on the prisoner island of Peh sit as some of the most intriguing moments in Seven. Parkouring from roof to roof and climbing over walls to sneak through gardens of bushes and brush piles is incredibly entertaining.

The devious ways of Teriel, and his uncanny approach to stealth make for a unique ride not found in many isometric RPGs today. Seven: The Days Long Gone oozes with a healthy dose of action, freedom to explore and discover dangerous locations in a slick apocalyptic setting, but forces a particular strategy of tackling the hurdles across Peh. While many may stray from the stealth essence found and flawed combat system, Seven: The Days Long Gone still manages to capture something that has the makings of a true hidden gem in the indie ever-expanding indie library.