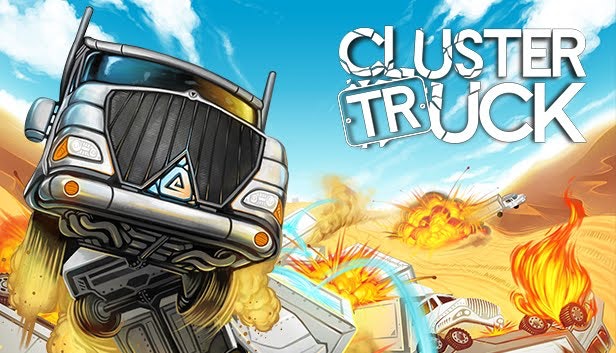 Just a Hop, Skip and Jump Away

ClusterTruck is a unique take on platforming that never quite nails the adaptable approach that most others try to lead with. The physics based platforming from one semi truck to the next is a cluster all on its own, but is graciously saved by the game’s subtle progression system and easy to pick up and play game style.

Displaying your choreographed jumps down the rambunctious line of racing semi trucks, players will find their initial goal behind ClusterTruck to seem quite simple. And, at first it is. The entire objective is for players to safely make it from the starting line to the ending goal by hopping on the backs of moving trucks, dodging incoming obstacles, surfing curves and jumps, all while never touching the ground. The first person view adds a much more involved spin on the game, but also leads to some very disorienting moments throughout the game.

At first, players will trounce atop the backs of moving semis as they casually veer and smash into one another forcing the player onto another truck. Before too long players will find themselves skipping across the line of rigs barely planting a full step before springing off to the next stepping stone. The constant mayhem and chaos that ensues shortly after take off is nothing short of sheer luck when it boils down to if players can make it across a developing pile up of semis.

Each course has the trucks running along a set path that players learn on the go. The physics presented in the game are anything but spectacular but somehow still manage to pull off a satisfying platforming romp amongst trucks. While incredibly frustrating to play when so much of your success rides on the often ungrateful side of luck, getting through a specifically difficult level is just enough to push you further into the game.

Across the game there are tons of hair pulling levels to get your ClusterTruck on, from vast to deserts to forest, and even the seasonal Halloween and Christmas levels to set the mood just right. Some levels also feature unique obstacles often hindering the normal method of skipping across the semi trailers. Each and every course shows players just how much more difficult the game is really capable of getting no matter how long you may have spent on the previous course. Just when you finish that challenging level here comes one much more difficult soon after.

ClusterTruck is Perfect for Quick Pick Up and Play Action

The ease of picking up Clustertruck and immediately getting involved in truck hopping chaos screams favorably to the arcade fans not looking for deep interfaces and menus. You pick the level and play. The better you do, the more points you rack up and soon enough you’ll find yourself spending those precious points on special abilities and skill to help you even further in the game.

While ClusterTruck may seem fairly cut-and-dry (and no one is saying it’s actually not) there’s still a minor sense of depth to the overall campaign. For instance, spending all of those valuable points to improve your abilities is just enough of a push to get players repeating earlier levels to earn more points in order to learn a new skill needed to pass a rather difficult course later in the game. From double jumping to slowing down time, there’s around a dozen or so abilities to tack on to your player’s truck leaping skill set.

The complexity of sticking your leaps onto the sliding, crashing and flipping semis takes a bit of practice to nail just right. Trial and error time and time again is the primary name of the game, but ClusterTruck is enough of a mindless good time one shouldn’t mind putting in a meager grind every other level or so. The unfairness of the random displays of chaotic meltdowns mid-level are frustrating at first as they leave players with nothing but a slim chance of survival. However, the quick levels and fast approach to restarting each level is a kind of ease that makes playing through for a quick joy attainable for most players.

The energetic action of leaping across the many trucks in line through a wildly entertaining obstacle course is a different type of platformer/physics game and it’s definitely not for everyone. The random occurrences of traffic jams in tight spaces makes reaching the end goal seem a bit unfair. But, still the point stands that ClusterTrucks is meant for quick satisfaction of meeting that “soaring through the sky” feeling and the thrill of sticking the all-too important landing to reach your goal. Whether looking to push for an arcade grind or just looking to pass some time, ClusterTrucks is a feasible option for gaming on the go now available on the Switch.