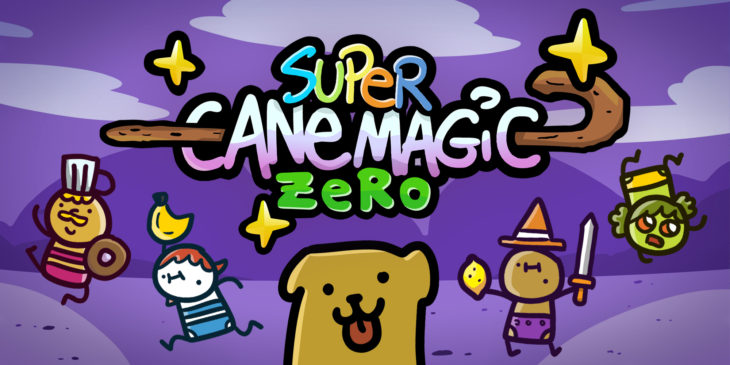 Welcome to the Tasty World of WOTF

Super Cane Magic Zero takes the intrepid design of action-adventure RPG games and combines it with surreal humor in a charming cartoon aesthetic. The game allows for up to four players to take on the food themed journey in a bizarre story surrounding a world overflowing with flavorful designations and one ultra-powerful canine. There’s a lot to soak in with Super Cane Magic Zero but once the wheels get going it becomes easy to lose yourself in the mysteriously colorful world – at least, until the expedition becomes too stale to supplement your appetite.

Check out our video summary review of Super Cane Magic ZERO below:

Diving into the tasty world of WOTF as one of the members of the “Dude” cast (Dude, Dudette, Dudward, etc.) players will equip magic, weapons and food to overcome menacing enemies and trivial puzzles in a vibrant action-adventure experience. The hand-drawn visuals create an easy-going aesthetic to the game’s design and is combined with the gripping action of combat against relentless foes.

How’s About a Food Fight?

Within Super Cane Magic Zero players will be guided along a journey to find magical wizards of the Poptarts Academy and reverse the evil doings of the magic canine in order to save the magical kingdom. There’s a lot of magic. But to go along with all of the wizardry and dark arts is the constant consumption and weaponzing of food items blended perfectly with the delicious region within WOTF.

There’s an easy pick-up and play attitude with the adventure that allows players to easily dive in and get to hacking. The game adopts the hack-n-slash playstyle but mixes it with a bit of magic and range attacks. Each character out of the over dozen playable heroes has their own unique magical abilities to help take out the hordes of enemies, while also having the ability of hurling various objects found at incoming opponents throughout the game.

The game’s world is set up with a variety of different regions and dungeons to explore as you quest your way to finding the six legendary wizards. Every area represents different tasty dishes or utilizes clever food puns. Exploring the world won’t exactly have players discovering too many exciting items, but does reward players with new equipment and weapons. It also helps that there are tons of food items to engulf which is the game’s method of healing your character.

Of course, while players may be able to consume any item, they won’t always be beneficial to you. Players must pay close attention to what they’re digesting as some items may damage the player or add other unwanted effects. There’s a good mix between yummy food items for healing, power-up items and perfect weaponized items capable of dealing significant damage when chucked at enemies. There’s also loads of chests and food bins scattered around WOTF that contain pieces of fruit and other healing items when players heave and smash them against walls.

Become What You Believe

Along with plenty of mouth-watering items to consume, like any other RPG players can find and equip tons of different armor pieces and weapons. Each piece of equipment comes with a variety of different stats which caters to different playstyles, as well as other various leveling trees to enhance personal stats. The different trees are broken up into different beliefs that have different effects on player actions. However, as many different skill trees there are within Super Cane Magic Zero, there’s little difference as to what branch offers from another. There’s some, but nothing significantly substantial from one tree to the next which can make it somewhat trivial on deciding which tree you decide to run with. Luckily, the game allows players to choose skills and enhancements from any category or branching side for those looking for the best stat enhancement available – not just concerned with the specific belief invested in.

And while leveling up and consuming various food items are a large part of the experience within Super Cane Magic Zero, most often you’ll find yourself combating hordes of odd enemies. Equipped with your magical ability and an attack weapon, players must adapt to simple, yet somewhat clunky battle mechanics. While the method of attack is easy to understand, often times it becomes a bit frustrating when trying to dial in precise attacks due to the aiming system. If using a standard gamepad, players use the right stick to aim in the direction of your attack, but it often feels as though the game requires the player to be incredibly close to the opponent(s) before actually landing a direct hit.

That’s not to say the combat itself is broken. It just takes a bit of getting adjusted to. Once acclimated to the design, players can swing furiously and begin getting a better grasp of how to fully take advantage of the weapons at your fingertips. And when you take into account the different equipment pieces to harness, the further you dive into the world of WOTF, the more thrilling the experience becomes. Though, while the battle system may start to appear more engaging and adaptive in the long run, the game outside of combat tends to become a bit dull and repetitive.

However, that shouldn’t take away from the fact that Super Cane Magic Zero is an ultimately satisfying co-op adventure. While playing through the game solo is completely doable, you’ll find greater satisfaction when teaming up with friends. And if playing on the same side as your friends isn’t something your particularly in the mood for, you’ll also find a PvP Battle Arena mode to hop into for a more competitive experience.

There’s a lot to admire about a game like Super Cane Magic Zero. From its charming cartoon design from Simone “Sio” Albrigi, catchy soundtrack and deep RPG architecture to keep progression feeling lively, the adventure seems to head down a continuous path of enjoyment. However, a few flaws tend to hold back the experience, causing unnecessary frustrations along the way in a journey that could have been a bit more enjoyable if it weren’t for tedious gameplay elements and otherwise defeating combat system.

Super Cane Magic Zero guides players along a vibrant journey through heavy fantasy in a world brimming with creativity. The four player co-op is an excellent way to dive head first into the offbeat plotline and often hectic combat scenarios. With tons of items and equipment to collect, plenty of food goods to devour and dozens of odd enemies to clash between, there’s a delightful amount of amusement to be had throughout your adventure – solo or in co-op. While there are some glaringly obvious issues in-game design that need attention in order to create an experience that’s much more genial, nevertheless, Studio Evil has created a delectable pallet for something even greater the next time around.